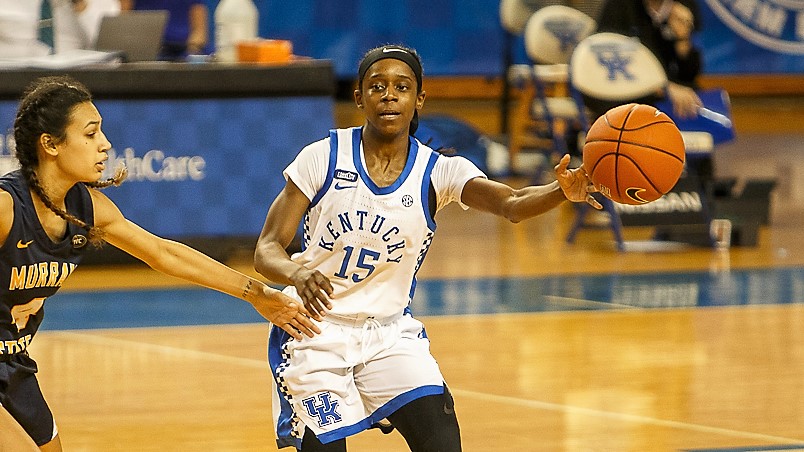 Wildcats will return to action Sunday vs. Belmont at 4 p.m. inside Memorial Coliseum

The 30 points were two shy of Patterson’s career high of 32, set last season at Arkansas. Junior Blair Green tied her career high with 13 points in the game for the Cats, while freshman Treasure Hunt had 12 points in her UK debut.

Kentucky (1-0) was without defending SEC Player of the Year Rhyne Howard and returning starter Tatyana Wyatt, who were both suspended by interim head coach Kyra Elzy for Wednesday’s game.

The Cats forced 32 turnovers in the game and scored 40 points off those miscues. UK also had a huge advantage in bench points, outscoring MSU 35-14 in that category.

Murray State actually led early, scoring the first three points of the game. However, UK bounced back by scoring six in a row, all by Patterson, to lead 6-3. After Murray State cut it to one at 6-5, the Cats scored 11 in a row to lead 17-6. Olivia Owens had four points in that run.

Murray State would get back within 10 on a pair of occasions before the Cats went on a 9-3 run to close the period with a 30-14 lead. Patterson hit all four of her first-quarter shots, including two from behind the arc, and both of her free throws for 13 early points.

In the second period, Murray State would cut the UK lead to 14, but the Wildcats completely blew the game open with a 9-0 run that took the lead from 35-21 to 44-21 with 4:36 to play in the half. Four free throws from Patterson and three-pointer from Treasure Hunt were the key plays in that run.

Kentucky would also score the last five points of the half and would take a 51-26 lead into the break. Patterson led all scorers with 21 points in the first half.

In the third quarter, Murray State scored the first five points of the half to cut the UK lead to 51-31. But the Cats again responded, this time with a 20-4 run, that extended the lead to 71-35 with just under four minutes left in the third. Patterson had eight points during the run and Hunt had five.

In the fourth quarter, Kentucky would lead by as many as 31 before settling for a 26-point victory.

Kentucky returns to action on Sunday, hosting Belmont at Memorial Coliseum. Tipoff is set for 2 p.m. ET and the game can be seen on the SEC Network.