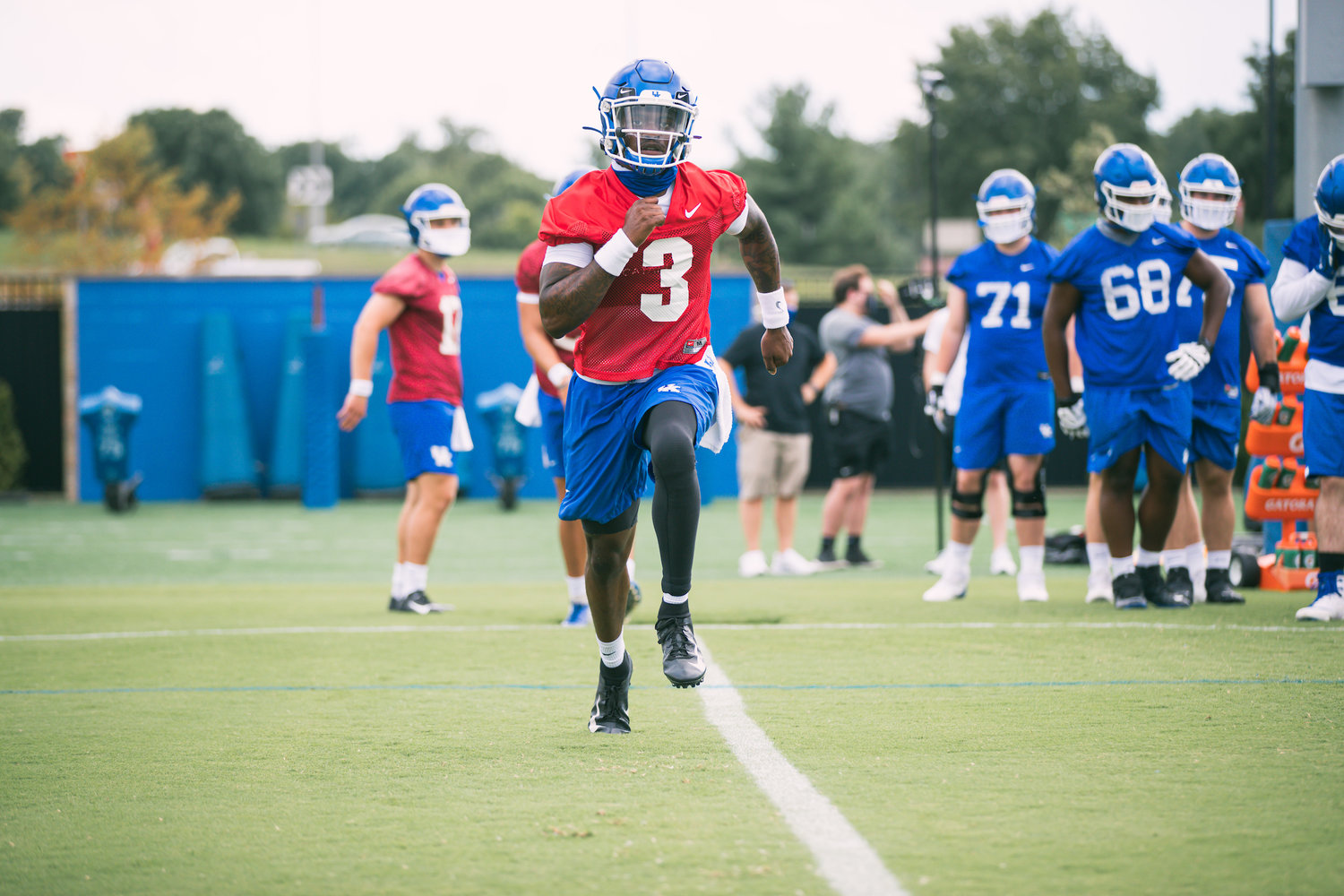 Terry Wilson felt at ease when he returned to the field Tuesday.

Wilson, who missed the last 10 games last after suffering a season-ending knee injury against Eastern Michigan in the second game of the year, took snaps with the first-team as the Wildcats opened fall workouts Tuesday.

“It felt good and it felt normal, even with all of the restrictions we are going through right now,” he said. “It felt really good to be back out there with everybody … It felt like a relief.”

The first-string signal-caller said he’s completely healthy and it showed in the team’s first full workout to open camp.

“I felt great out there,” he said. “I’m at 100 percent and no mental blocks. I’m just out there slinging the ball and having fun and doing what I love to do. I don’t even think about the knee or anything and I feel fine. I’m just happy to be back out there with my brothers and just getting back to it.”

Like the rest of his teammates, Wilson also was relieved when the Wildcats’ 10-game Southeastern Conference schedule was released last week, offering hope in the midst of the ongoing COVID-19 pandemic.

‘‘We’re really blessed to be able to continue doing this — just to be able to come to practice and just do what we love,” he said. “I think that is just what is driving us the most — knowing that we’re the only guys who get to come out and practice and continue doing football things drives us even more. We need to take those safety precautions and follow (the protocols) we need to follow.”

As the league and school administrators weighed in on even giving the season a try, Wilson began having his doubts about even playing this season.

“It came to a point where I was thinking what was best for me and my newborn on the way and my girlfriend — what was the safest thing to do?” Wilson said. “Everybody on this team — we work hard every day and we’ve worked hard throughout this whole summer. I just wanted to be around (my teammates) and I just wanted to come back and finish strong with my guys.

“It definitely got to that point and time (where) it (was) scary and you didn’t know what to expect. I feel like we’ve got past that and no we are here.”

Wilson admitted things are different because of the extra precautions, but didn’t notice much of a change on the field.

“On the field it feels normal,” he said. “Everybody is still running around and flying around and doing what we’re supposed to be doing out there and just having fun. On the field, it really isn’t different. But definitely inside the facilities, you have those restrictions and things you have to follow by.”

To Wilson’s disappointment, the revised schedule didn’t feature a rematch against Eastern Michigan, but he likes the 10-game slate. Wilson injured his knee against the Eagles in last year’s contest at Kroger Field.

“I feel like we have an even better schedule now,” Wilson said. “I’m just worried about the first game and what we can do to get better. (We) want to go down there (at Auburn), compete and just play ball. It would have been really cool to open up against those guys (Eastern Michigan) again, but this schedule that we have is awesome. You can’t beat it.”

To go along with a healthy knee, Wilson also changed his hairstyle.

“I’ve had my dreadlocks for 10 years now and I just felt like it was time to shake it up and get a new look,” he said. “I feel like a different person.”

The Kentucky quarterback hopes that translates into even more success on the field and is anxious to continue the path toward the season opener on Sept. 26 at Auburn.

“It doesn’t get any better than this,’ he said. “I feel like everybody wants to be playing football right now and we’re just fortunate enough to be out there and taking advantage of it.”