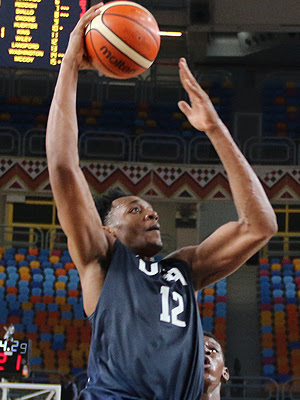 Austin Wiley fought to a double-double of 19 points and 10 rebounds in the USA’s 81-59 quarterfinals round victory over Germany Friday night at the 2017 FIBA U19 World Cup. With the win, the USA advances to the semifinals and will face Canada on Saturday, 2:30 p.m. EDT. (Photo by UK Athletics)

With the win, the Americans advance to the medal round semifinals on Saturday and will face Canada (4-1) in a 2:30 pm EDT game. Canada earned its semifinal appearance by downing previously undefeated France (4-1) 73-67.  The other semifinal will feature Italy (4-1) versus Spain (5-0). The live stream of the USA-Canada game will be available on ESPN3 & the ESPN App.

“Here’s what happens – you have teams that are going to play with such high intensity and focus, it’s just can they do it for 40 minutes,” asked USA head coach John Calipari (Kentucky). “The way we are doing this, when we are playing 10 or 11 kids and they are playing 22 or 18 minutes, you just keep coming at people in waves.

“We don’t have any weak links on this team. We just don’t. What I’m seeing right now is us pressuring them, and at some point, they will back off. Now, they (Germany) went zone, and it was bang, bang, bang with 3s.”

Trailing 12-11 after Isaac Bonga hit a 3 for Germany, the USA scored six straight points to regain the lead, and following a basket from Josh Okogie (Georgia Tech/Snellville, Ga.) with :02 remaining the quarter, the USA had a 19-13 lead after the first 10 minutes.

Germany refused to fold and although the U.S. built an eight-point lead, 28-20, in the second quarter, Germany kept it close and at halftime the Americans led 33-31.

Outscoring the USA 6-2 over the third quarter’s first 1:34, Germany pulled ahead 37-35, marking the first time in the USA’s five games that it found itself trailing in the second half

Hamidou Diallo (Kentucky/Queens, NY) slammed home two to tie the score, Cameron Reddish (Westtown School/Norristown, Pa.) added a jumper and the USA was off and running and went on to outscore Germany 21-4 over the final 7:20 of the quarter.  Wiley scored seven points in the game-deciding run. Germany managed just 10 points in the third quarter.

Taking a 56-41 lead into the fourth quarter, Germany went to zone defense and the U.S. opened the final stanza with Payton Pritchard (Oregon/West Linn, Ore.) knocking down back-to-back 3s, which were followed by Carsen Edwards (Purdue/Atascocita, Texas) adding another 3 as the U.S. pushed its lead to 65-45 and never looked back.

“From the start, our guards were pressuring the ball well and making them uncomfortable, and we were getting easy buckets that way, too,” said Edwards. “So, when they went into that zone, we were able to knock down open shots.”

“Carsen (Edwards) did a good job playing defense and giving us a lot of energy. Without him, I don’t know if we would have gotten over the hump like we did,” said Reddish, who contributed seven points, six caroms, five assists and three of the team’s 14 steals.

“Carsen Edwards was the one guy that went in and changed the game because of his intensity, and he was dragging people with him,” said Calipari.  “Payton (Pritchard) played well, I thought, in that group. In the second half, all those guys that have been starting, played well. I thought Austin (Wiley) rebounded and got baskets and did his usual thing. Cameron (Reddish) played better in the second half. I don’t think anyone played poorly.”

The USA’s bench outscored Germany by a whopping 39-7 margin.

Getting beat on the glass 23-14 in the first half, the USA outrebounded Germany 30-14 in the second 20 minutes to finish the night with a 44-37 advantage on the glass.

The USA defense limited Germany to 39.4 percent shooting in the game, and jut 13-36 shooting from the field in the second half, including 2-of-10 from 3-point. Additionally, the U.S. force Germany into 23 turnovers that led to 20 USA points