Vanderbilt Leaves Kroger Field with a 24-21 Victory over Kentucky 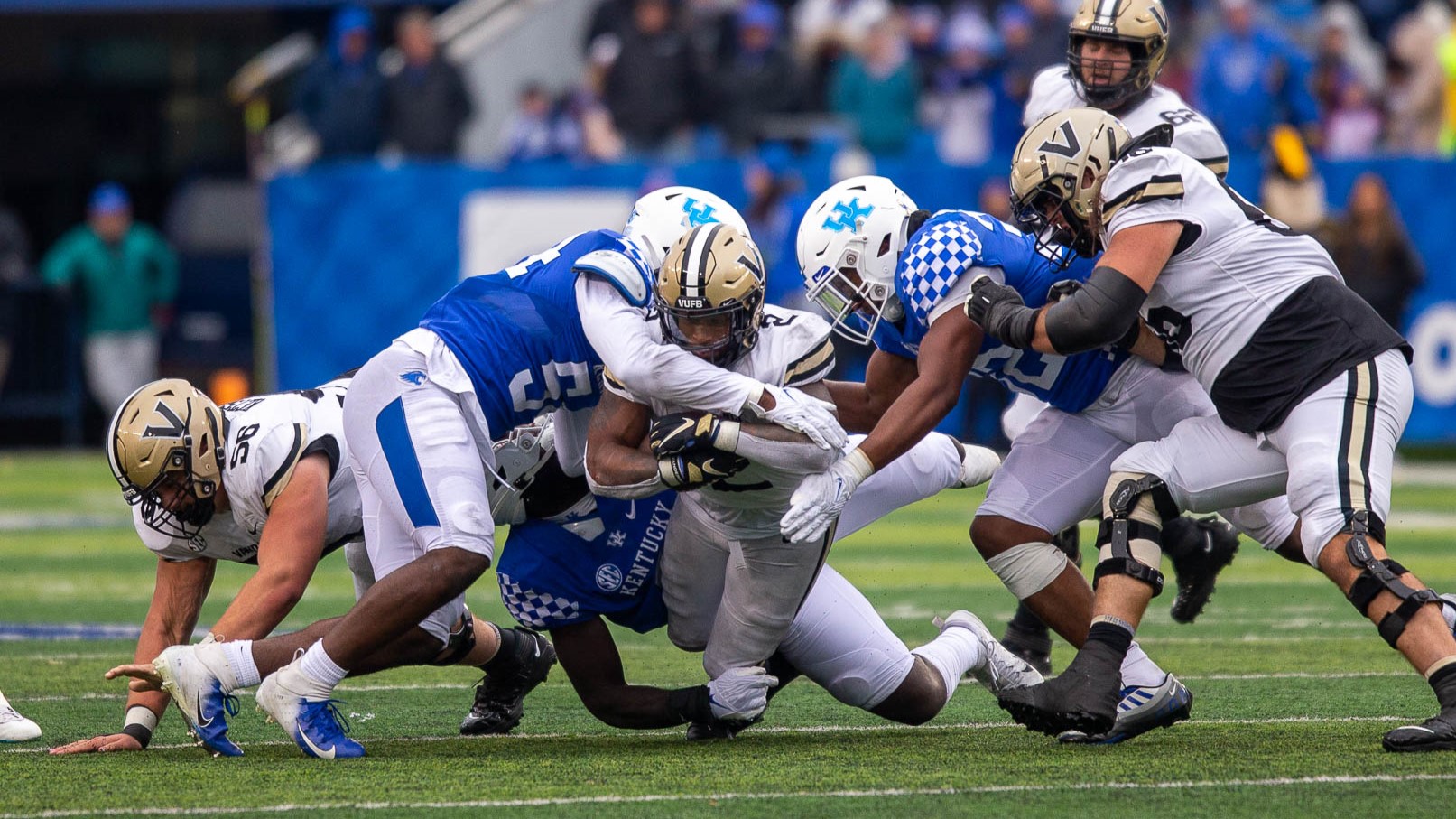 CATS Fall Hard to 6-4 on Season

Kentucky returned to Kroger Field hosting the Vanderbilt Commodores. The game was not the best weather as cool temperatures rain and even some snow mixed in deterred a lot of fans from coming to the game. Kentucky struggled to move the ball in the first half and was only able to convert with two field goal attempts off the leg of Kicker Matt Ruffolo. Vanderbilt had one series that put points on the board when QB Mike Wright busted through the secondary scoring on a fifty-nine-yard rushing touchdown. At intermission Vanderbilt led Kentucky 7-6.

In the second half the tempo and scoring picked up for both teams. Vanderbilt scored seventeen points in the half with Kentucky scoring fifteen points in the half. Chris Rodriguez had two impressive runs in the half resulting in two touchdowns, and Ruffolo converted on a thirty- nine Yard FG kick. Vanderbilt trailed 21- 17 late in the game and converted on multiple fourth down attempts, setting the Commodores up in the red zone in the final minute of the game. On one fourth down attempt Kentucky stopped the Commodore offense with an interception, but a costly penalty negated the play. Vandy also faced a fourth and long converts with a forty-yard pass downfield and the ball in the Kentucky Redzone. Vanderbilt scored on a five-yard pass from QB Mike Wright to Will Shepherd and gave the Commodores the score. Kentucky had one last possession to drive to the field and with little time remained on the game clock. Kentucky turned the ball over with a Levis interception and the Commodores escape Kroger Field with a 24-21 victory over the Kentucky Football team.

1st quarter- Vanderbilt opened the game with the ball and fumbled early in the quarter with the ball recovered by Kentucky Corner Back Carrington Valentine and nearly scored, before being brought down at the Vanderbilt twenty-seven-yard line. Kentucky was unable to move the chains on the opening drive resulting in an FG attempt by Ruffolo. Ruffolo was good, converting on a forty-seven-yard field goal, and Kentucky had an early 3-0 lead over Vandy. On Vandy’s second offensive possession the Commodores were effective moving the ball and scored on fifty- nine-yard QB keeper by Wright. Vandy regained the lead and led 7-3 with 11:54 remaining in the first quarter. Kentucky finished the quarter with another scoring possession Ruffolo converted his second field goal, a twenty- seven Yard FG and completed a fifteen play sixty-six-yard drive. At the end of the third quarter Vanderbilt led Kentucky 7-6.

2nd Quarter– In the second quarter neither team was able to score, and both offenses struggled to move the ball. The Kentucky defense stepped and forced an interception in the endzone. Kiedron Smith picked off the pass by Wright. Kentucky began to have some success moving the ball with Kentucky marching the ball down the field on a ten play sixty-six-yard possession. The offense was unable to convert on third down and relied on the leg of kicker Ruffolo. Ruffolo FG attempt was blocked and prevented Kentucky from scoring. Vanderbilt was forced to punt on the next offensive drive and The Commodores had one final possession in the half resulting in a loss of downs as the half ended. At intermission, the score remained Vanderbilt 7- Kentucky 6.

3rd Quarter– Vanderbilt attacked the Kentucky defense in the third quarter with the rushing game and had success running the ball with Ray Davis scoring the ball with a one-yard rushing touchdown. Davis had several plays that were nearly scoring possessions in the quarter and the Kentucky defense could not stop the Commodores offense. Vanderbilt scored on a ten play eighty-one-yard drive and led Kentucky 14-6. Kentucky began to have success moving the ball through the ground with Rodriguez leading the attack. Kentucky put three points on the board in the third quarter when Ruffolo connected on a thirty-nine-yard FG, the FG tied a personal record for Ruffolo with three made FG. As the quarter was winding down Vandy QB Wright scrambled picking up a big first down placing the ball in the Kentucky redzone. Vandy was unable to score on the possession and the quarter ended and Vanderbilt led Kentucky 14-9.

4th Quarter–   While the first three quarters lacked with offensive fire power, the fourth quarter was overly exciting with Kentucky making a comeback and the CATS looked to escape Kroger Field with a hard-fought win. Rodriguez was phenomenal in the fourth quarter scoring two rushing touchdowns and one of those was a seventy-two-yard gain. Kentucky had trailed all game, until Rodriguez gave the CATS a lead with a five-yard rushing Touchdown. Kentucky 15- Vanderbilt 14. The lead was short lived as Vanderbilt converted on a twenty- six-yard FG by kicker Joseph Bulovas and the Commodores regained the lead. Kentucky gave Rodriguez the ball again on the next possession and he exploded through the line and had open field in front of him. Rodriguez finished the drive with an explosive seventy-two-yard rushing touchdown. Kroger field had been quite all game, but when Rodriguez scored on that play the crowd come alive with excitement.

The last five minutes of the game will haunt Kentucky for a long time and had the Commodores facing several fourth and long possessions and a victory was within reach. Vanderbilt needed a touchdown to win the game and went for it on several fourth downs. On one play Kentucky had Vandy backed up facing a fourth and long. The QB pass was intercepted by the Kentucky defensive back, but a costly penalty negated the play and allowed Vanderbilt to retain possession. Vandy faced another fourth down with the ball near the fifty- yard line, the QB Wright threw the ball downfield into single coverage and the ball was caught for a forty-yard gain and the ball inside the ten-yard line. Vandy completes the drive a few plays later with a passing touchdown from Wright to Will Shepherd, and the Commodores had a three-point lead, Vanderbilt 24- Kentucky 21. Kentucky had one last possession to score the ball with only thirty- two seconds remained in the game. Kentucky had to through the ball downfield and Levis pass was intercepted by CJ Taylor. Vanderbilt hangs on to defeat Kentucky 24-21 in a very ugly game.