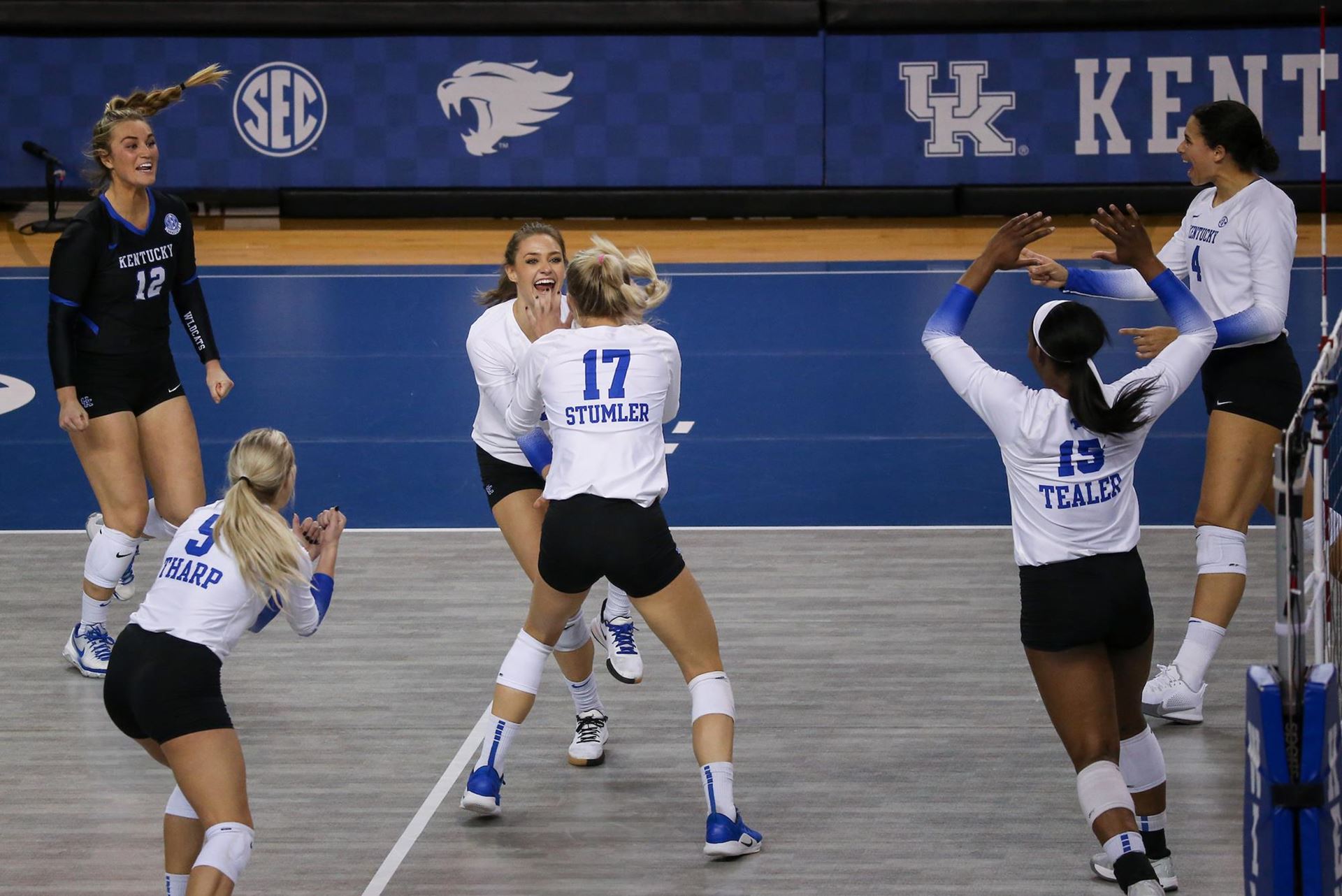 Kentucky’s quartet of seniors, Gabby Curry, Madison Lilley, Kendyl Paris and Avery Skinner were honored prior to the match for their career-long accomplishments and all four contributed on the floor Saturday in UK’s win over Ole Miss.

Senior outside hitter Avery Skinner led Kentucky in Saturday night’s match, earning her second double-double of the season, with 16 kills and 10 digs. Senior setter Madison Lilley contributed four kills on six swings, hitting .667, one of the highest hitting percentage nights of her season. Helping run the offense, Lilley had 51 assists, tying her season high, and also tacking on nine assists. Gabby Curry had 11 digs to lead all Wildcats and four assists on Saturday. Additionally, Kendyl Paris had four kills on 11 swings with a block.

The No. 3 Wildcats have now swept all eight series it has played this season, having won 35 sets in a row before losing the third set to Ole Miss on Saturday. Kentucky stands as the only undefeated team in the league at 16-0 on the season.

Kentucky will next take to the floor in the season’s most anticipated series in the Southeastern Conference as the Wildcats will travel to Gainesville, Fla., to face No. 8 Florida in a top-10 showdown. Game one will be Friday, March 14 at 1 p.m. ET before a 4 p.m. ET finale on Saturday afternoon. Both matches will stream on the SEC Network+, ESPN3 and the ESPN app from Exactech Arena.

Alli Stumler’s third kill of the set in the early portions of the match put Kentucky up five points at the media break at 15-10. UK’s offense was roaring, hitting .600 with nine kills on 15 swings to that point and things only got better for the Wildcats with Kentucky increasing its lead to 17-10 as Ole Miss called its first timeout. Kentucky’s lead got higher, as it was 19-10 on Avery Skinner’s fourth kill of the set and Madison Lilley’s termination on two made it 20-11 as UK ran away and hid with the set, 25-16. Kentucky hit .500 in the set with 16 kills on 28 swings, led by five from Stumler and four from A. Skinner. Lilley had 12 assists.

Three points in a row gave Kentucky the first degree of separation in the second set midway through as the Wildcats took a 13-9 lead and Ole Miss expended one of its timeouts. UK’s lead ballooned to six points on a net violation by the Rebels after a kill from A. Skinner at 18-12 with UK’s hitting percentage for the match hovering over .400 and Tealer in the middle hitting .750. The Wildcats lead expanded to 21-14, its largest of the set on a failed Rebel challenge and Kentucky saw out the set from that point, taking the frame 25-19, ending it on Madison Lilley’s attack.

After falling behind early, an Azhani Tealer serving run helped propel Kentucky into the lead, as Tealer turned a 7-3 deficit into a 9-3 lead before Ole Miss elected to call a timeout, its first of the set. Ole Miss responded well out of the timeout to win three in a row and took a 12-10 lead over the Wildcats before a Kendyl Paris kill on her senior day stopped the bleeding. Ole Miss and Kentucky continued to tie and exchange the lead through the middle stanza of the set, with Ole Miss grabbing an 18-17 lead, and after UK fell behind 19-17, UK called a timeout. Ole Miss’ lead was as big as 21-18, before UK began to claw back beginning with a successful net challenge. After UK cut the lead to one point at 22-21, Ole Miss won three of the final four points to take the third set, 25-21.

Kentucky dictated the tenor of the fourth set from the outset as the Wildcats took control early. Stumler and Skinner upped their match totals to 15 kills each as the media timeout was reached in the frame with Kentucky leading, 15-9. After Kentucky won a challenge to bump the lead to seven, a kill by Bella Bell increased the margin to 18-10 and Ole Miss called a timeout. After UK won two of the next three points, Ole Miss called its final timeout and following the break, Kentucky saw out a 25-13 fourth-set win to close out the match.