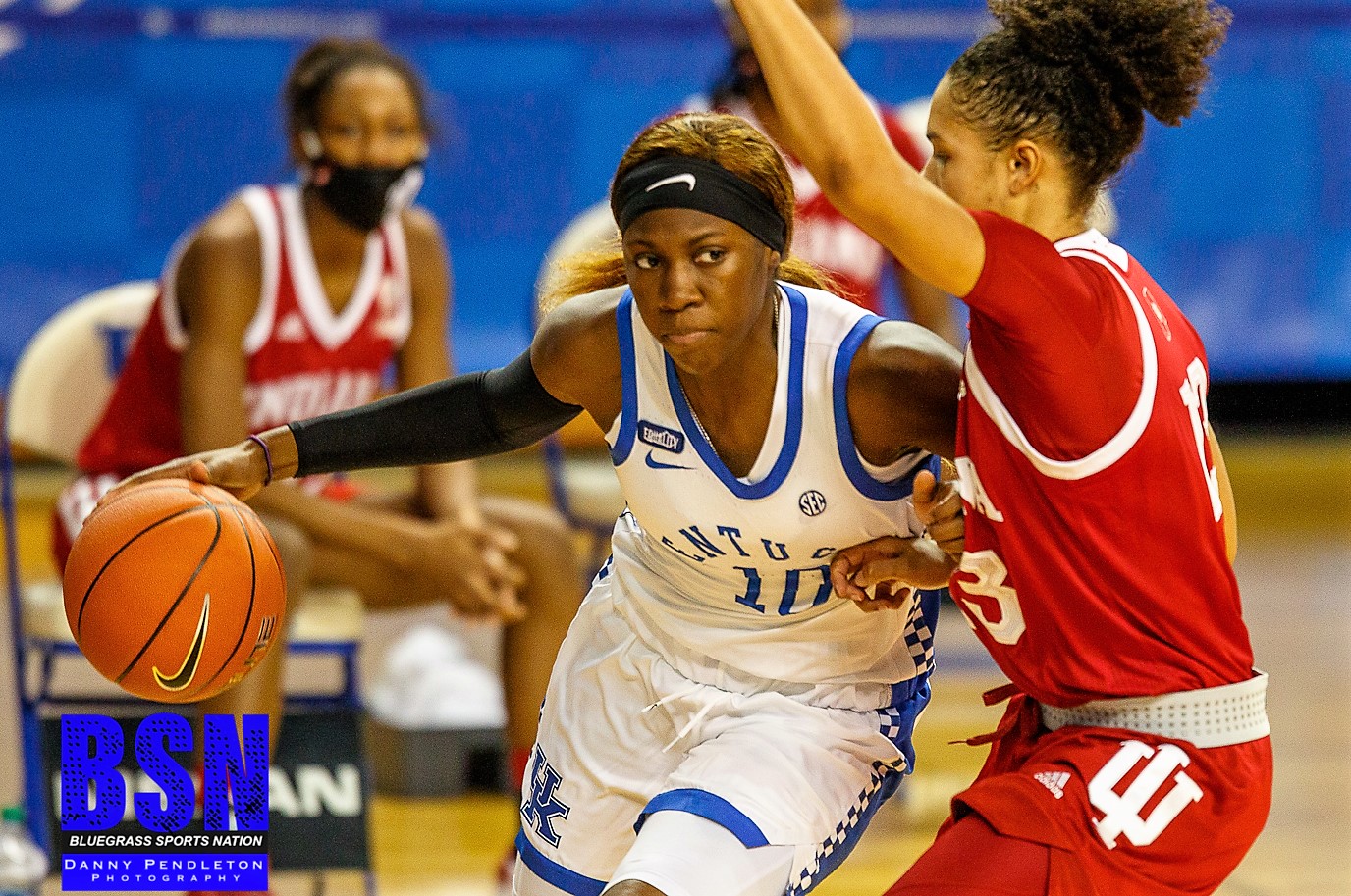 The 11th-ranked Kentucky women’s basketball team rallied from a double-digit deficit in the fourth quarter to beat No. 13 Indiana 72-68 on Sunday at Memorial Coliseum. Kentucky outscored Indiana 28-14 in the final 10 minutes of the game.

Rhyne Howard led all scorers with 22 points in the contest, but Kentucky got big efforts from three other players as well. Dre’una Edwards had 14 points  and 10 rebounds, Chasity Patterson had 13 points and seven rebounds, while Robyn Benton came off the bench to score 12 points, including nine crucial points in the fourth quarter.

Patterson got the scoring started in the first quarter for the Cats with a driving basket in the lane, making it 2-0. After Indiana took a 4-2 lead, Patterson hit a three from the top of the key, giving UK a 5-4 advantage. The Hoosiers would answer with a three from Jaelynn Penn to grab a 7-5 lead, but Kentucky scored the next five, all by Howard, to lead 10-7 with 5:56 left in the first period.

Indiana would answer with a 14-2 run, including 12 in a row, to take a 21-12 lead with after 10 minutes of play. Kentucky did not score over the last 3:35 of the first period, missing three shots and committing two turnovers in that span.

The Hoosiers scored first in the second period before Kentucky got a basket from Patterson to end the scoring drought at 5:27, making it 24-14. But Indiana scored the next four to lead 28-14, forcing a Kentucky timeout.

Kentucky got a three from Edwards to cut the lead to 11, 28-17. The Cats would eventually get back within 10 when Howard drilled a right-wing three to make it 32-23 with 3:57 left in the half. But Indiana scored the last four points of the half to take a 36-23 lead into the break. Indiana had 11 second-chance points in the first 20 minutes and the Hoosiers hit 42.9 percent of their shots. Meanwhile, Kentucky hit just 32.1 percent from the floor in the first half.

The Cats scored the first four points of the third period on two free throws by Blair Green and a Howard basket, cutting the Indiana lead to 36-27. But Indiana answered with four straight of its own to build the lead back to 13.

Kentucky would continue to try to chip away at the lead, getting within nine on two occasions but each time, Indiana had a response. The Cats would eventually get within eight, 45-37, on a three by Howard but again Indiana countered, this time with four in a row, to lead 49-37.

The Cats would assemble a 7-1 run, including a corner three by Tatyana Wyatt and a runner by Benton, to get within six, 50-44, with 50 seconds left in the third period. But Indiana got two late baskets to make it 54-44 after three quarters.

In the fourth quarter, both teams struggled to score early before Edwards banked in a three-pointer from the left side to get the Cats within seven, 54-47. But Indiana got three of its own, on a Grace Berger basket and free throw, to lead again by 10, 57-47.

But Kentucky then surged with a 13-2 run, keyed by seven points from Benton and four from Edwards, to go from down 10 to up one, 60-59, with 2:51 to play. Indiana would take the lead back on a pair of Berger free throws 20 seconds later.

Kentucky took the lead back when Edwards hit a pair of free throws with 1:22 to play. And after a defensive stop, Howard hit a runner to give the Cats a 64-61 lead with 59 seconds to play.

The Cats got another stop on Indiana’s next possession and Howard found a sprinting Benton for a breakaway layup, extending the UK lead to 66-61 with 37 seconds to play.

Indiana would not go away quietly as Berger drove to the basket, scored and was fouled by Benton with 29.4 seconds remaining. Berger added the free throw to cut the lead to 66-64.

Howard was fouled with 25.9 seconds to play and she hit both charity tosses to give UK a 68-64 advantage. But Berger drove to the basket and scored again, this time with 15 seconds left, to cut the lead to 68-66.

KeKe McKinney was then fouled with 14 seconds to play and the senior hit both of her free throws to give UK a 70-66 lead. But Berger scored for Indiana again, this time on putback of her own miss, to cut the lead to 70-68 with 6.1 seconds remaining.

Kentucky called a timeout to advance the ball into the front court and the Cats got the ball in to Patterson, who was fouled with 4.2 seconds to play. The senior rolled in the first try and then drilled the second to give the Cats a 72-68 lead.

Indiana had one final possession but failed to score.

Kentucky returns to action on Wednesday, hosting Marshall at Memorial Coliseum. Tipoff is set for 7 p.m. ET and the game can be seen on SEC Network Plus.