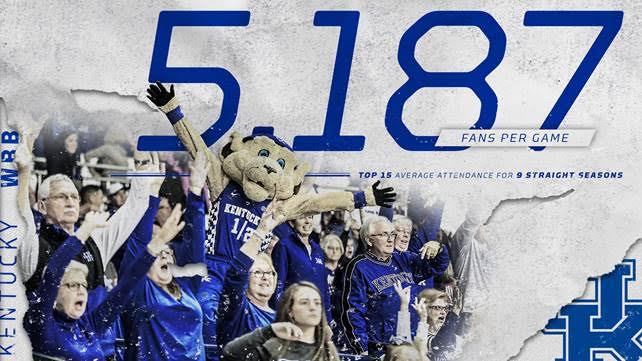 Overall in 16 homes games – including three inside Rupp Arena – Kentucky amassed a total attendance of 82,984, which ranked top-20 nationally in total home attendance for 2017-18. Kentucky did not amass 100,000 for the seventh straight year, but played four fewer home games in 2017-18 than previous years.

Kentucky’s attendance numbers have reached impressive heights the last decade as the Wildcats have averaged 5,000 or more fans every year since 2009-10, while seven of the eight most-attended home games in program history have all come the past few years under head coach Matthew Mitchell.

The Wildcats drew big crowds all across the country, not just in Lexington, as a total of 147,477 fans saw Kentucky play during the 2017-18 season, which ranked 11th nationally.