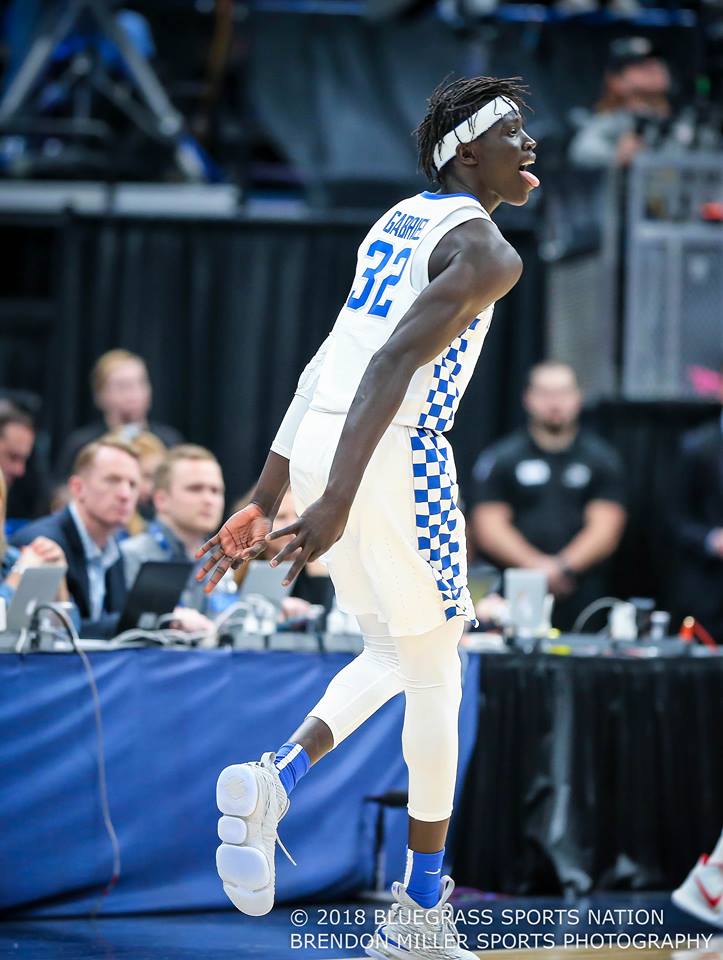 St. Louis, MO – Kentucky was all business in their 86-63 win over the Alabama Crimson Tide in SEC Tournament semi-final round action.

Sophomore forward Wenyen Gabriel was on fire for the Wildcats as he made a career best 7 for 7 three pointers.  Gabriel had a season best and tied a career high for points as he poured in 23 for the game, seventeen of those came in the second half.

Gabriel was also clutch down the stretch for Kentucky.  After the Wildcats led Bama by 10-points at halftime, they looked like they were going to put the game out of reach when they went up by 19-points with 14 minutes to go in the game, but the Tide came fighting back and cut the lead down to 11 points.  This was when Gabriel hit the first of his clutch shots as he hit a three to settle down the Wildcats. Alabama, who just last night came back to win from a 10-point halftime deficit against Auburn, wasn’t about to throw in the towel. The Tide cut the lead back down to 9 points with only five minutes left in the game.  Gabriel once again came to the rescue as he hit another 3-pointer from the right corner to re-energize the Wildcats and put them on track for the 23-point win.

While Gabriel was having his career day, he was far from the only wildcat playing well.  Freshman point-guard Shai Gilgeous-Alexander had another big day, showing why he was voted second team all-conference and on the all-conference freshman first team, as he had 19 points and 8 assists.  Forward PJ Washington also had another big game with 14 points and 8 rebounds, as he provided an inside presence for the Wildcats. Kevin Knox was the fourth Wildcat player in double digits as he had 11 points on the day.

But, it just wasn’t offense that led to the win.  The defense held Alabama to 30% shooting in the first half and only 37% for the game.  They also took on the challenge of trying to slow down Alabama’s freshman point-guard Collin Sexton who came into the game averaging 29 points a game in SEC Tournament play.  While the Cat’s didn’t completely shut down Sexton, who finished the game with 21 points, they did make him work for everything he got as he scored nine of those 21 points from the free throw line.

With the win the Wildcats move on to the Finals where they will play the Tennessee Volunteers for the Championship.  The game will be televised on ESPN at 1:00 PM EST tomorrow.