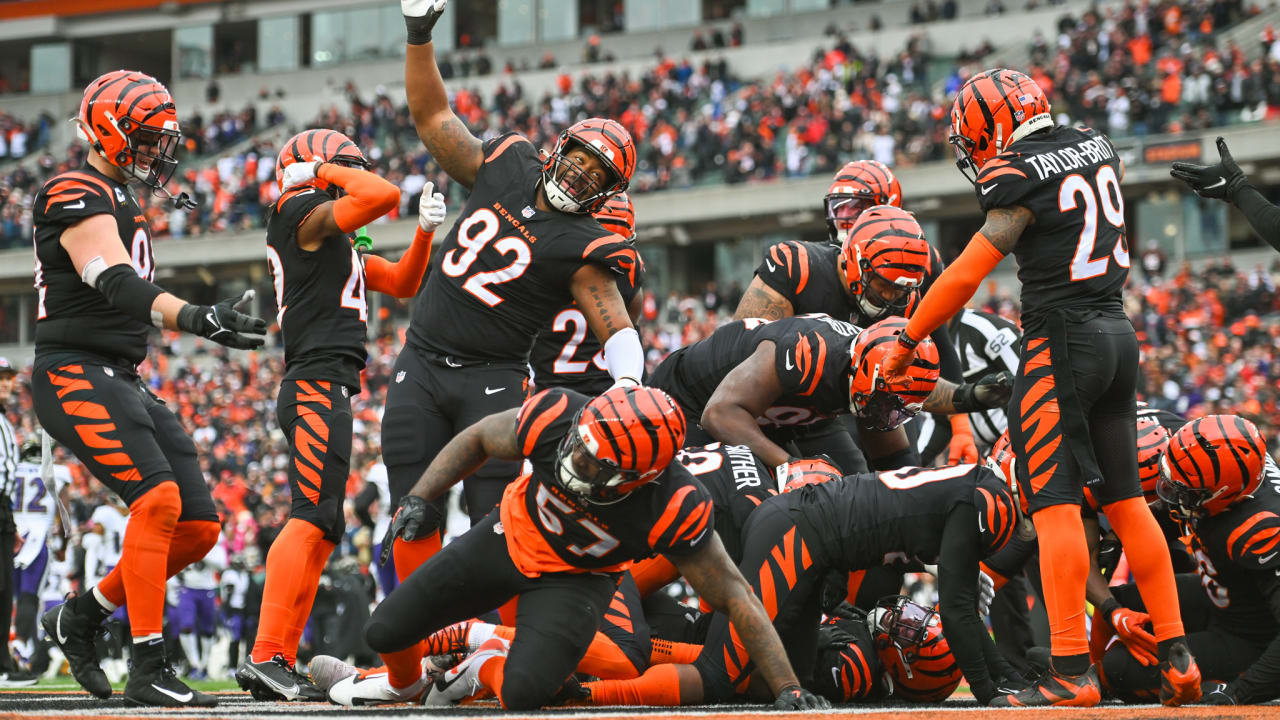 On Sunday’s last day of the regular season, Karras’ old team missed the playoffs with a loss in Buffalo while Bengals quarterback Joe Burrow welcomed him to the postseason by handing him a cigar as playmaker Ja’Marr Chase advised, “Smoke ’em if you got ’em.”

“Bill was not a big cigar guy in the locker room,” said Karras, when asked if this was his first celebratory cigar of his five division titles. “This organization is fantastic. Such a different perspective and refreshing year. I’m so excited to be here and grateful I’ve got this opportunity.”

This breath of fresh air blowing through the NFL cut through Paycor Stadium in the Bengals’ disjointed but decisive 27-16 victory over the Ravens Sunday, giving them back-to-back division titles for the first time in history and head coach Zac Taylor as many division crowns as Paul Brown and Sam Wyche in Bengals annals and more than Belichick, Mike Tomlin, John Harbaugh, Pete Carroll, Sean McVay and Sean Payton in the 2020s.

And as many as Tom Brady in the decade.

Karras’ refreshing air is rushing through a window that Burrow says isn’t closing any time soon.

“The window is my whole career. Everybody that we have in that locker room — all the coaches we have — things are going to change year-to-year, but our window is always open,” Burrow said. “I know the guys that we have in the locker room. Like I said, it’s going to change year-to-year but I’d like to think that a lot of guys in there will be around for a long time. We’ve won a lot of football, played a lot of football together. We’ve got great players in there.”

The fact that the victory was disjointed over a team that sat many of its best players didn’t take away from the significance. It’s the AFC North, man, where analytics go to die.

Indeed, it is running back Joe Mixon’s coin flip in the end zone to celebrate the game’s first touchdown that tweaked the NFL’s decision to change the rules on them two days before the game that defines how the Bengals’ have confidently barged into the game’s elite the past two seasons.

And Taylor, who reads his room as well as anyone in the league, pushed just the right us-against-them button when he pulled out a clip from the movie “Gladiator,” Saturday night.

“You don’t see it too often,” said free safety Jessie Bates III, the fifth-year free safety who has seen it all here and that includes the image of the franchise quarterback handing out cigars.javascript:falseJoe Burrow: “It’s Expected Now”

“That’s what make our group so special. Just a bunch of normal dudes. Joe Burrow doesn’t walk around like Joe Burrow. He walks around like he’s any other guy in this locker room. He plays hard all the time. Handing out cigars … (Taylor) showed us a cool little video during our team meeting last night. Just having fun with it. Then you see Joe Mixon come out with the celebration. I thought it was a hell of a celebration. Pretty cool. Probably the best one all year.

“It shows how cool our locker room is, honestly. For someone to come up with that idea and have fun with it instead of (complain) about it, super happy to be around these guys.”

No one, of course, is cooler than Burrow, the cold-blooded warrior with 11 straight wins in December and January after throwing his Bengal-record 35th touchdown pass of the season while becoming the NFL’s all-time completion percentage leader on a day that he said wasn’t his best.

“Did not like the way I played today,” said Burrow after his uncharacteristic 60-percent passing. “I missed throws I usually make, but I won’t miss those again.”

That’s the confidence you’ve got to have to weave to the music like he did sporadically postgame puffing on one of Mixon’s Tabak Especials, mirroring one of his Houdini escapes from the Ravens Sunday. As the Bengals smoked, the NFL finalized this Sunday’s night Wild Card Game at Paycor (8:15 p.m.-Cincinnati’s Channel 5) against Baltimore.

And he’s given his teammates that January jet air of confidence as they go into the tournament where only two AFC teams have more than their 22 wins in the last two seasons, the No. 1 seed Chiefs and No. 2 Bills. Their eighth straight win is longest in the AFC and tied for the longest in a Bengals season. They won three straight in the AFC North after starting 0-3, went 9-1 against everyone else and 12-2 since he told the media to relax that day in Dallas to “relax,” after the 0-2 start.

“Joey B is the heart and soul of this team,” Karras said. “He’s our unquestioned leader and he’s damn talented. I just want to do my little part of it every day and he makes us all look good.”

Another one of those seasoned NFL vets, savvy slot cornerback Mike Hilton, brought two AFC North titles with him from Pittsburgh and now has two as a Bengal and he said why this one is special.javascript:falseMike Hilton: “We Are A Resilient Team”

“No. 1, just me being a part of where we are now,” Hilton said. “When I came over, where this organization has been, I knew when I brought my mentality and my mindset we’re good enough to win, I can see escalate around the room. Now back-to-back champs. It feels good.”

Hilton could joke, a winner’s joke, that he should share Trey Hendrickson’s second-half sack. At the other end of the locker room, Hendrickson, who came over from Sean Payton’s four straight NFC South crowns in New Orleans, reflected on going six-for-six in division titles in his career.

“We can control what we can control and that’s the next game, next snap. We flush things that don’t go our way. I think that’s a lot of the characteristics that make this team special,” said Hendrickson, whose eight sacks led the team again. “For us, we knew we had to win. We wanted to wear these (AFC North) hats with a win anyway. We earned it. They know it. We know it. There’s no question now. They’re coming to Cincinnati.”

Only Tyler Boyd has been on the roster longer than Mixon, one of those draft nuggets from 2017 before the gold rush of the 2020s brought him teammates such as Burrow, Chase, Tee Higgins, Logan Wilson, Cam Taylor-Britt, Cordell Volson …

Mixon traced the drafting of Burrow and then the arrival of guys like Hilton and Hendrickson to Sunday’s smoke.

“Duke did a hell of a job bringing guys in. Zac did a hell of a job believing in us, knowing we are going to shift it,” Mixon said. “And the players just really sticking with each other and gelling the way that we do. I feel like our energy and our chemistry is unmatched. It’s untouchable.”

Karras, who has touched the trophy, planned to smoke his cigar later.

“This is high stakes professional football,” Karras said. “There are 14 teams left. Let’s see who wins.”