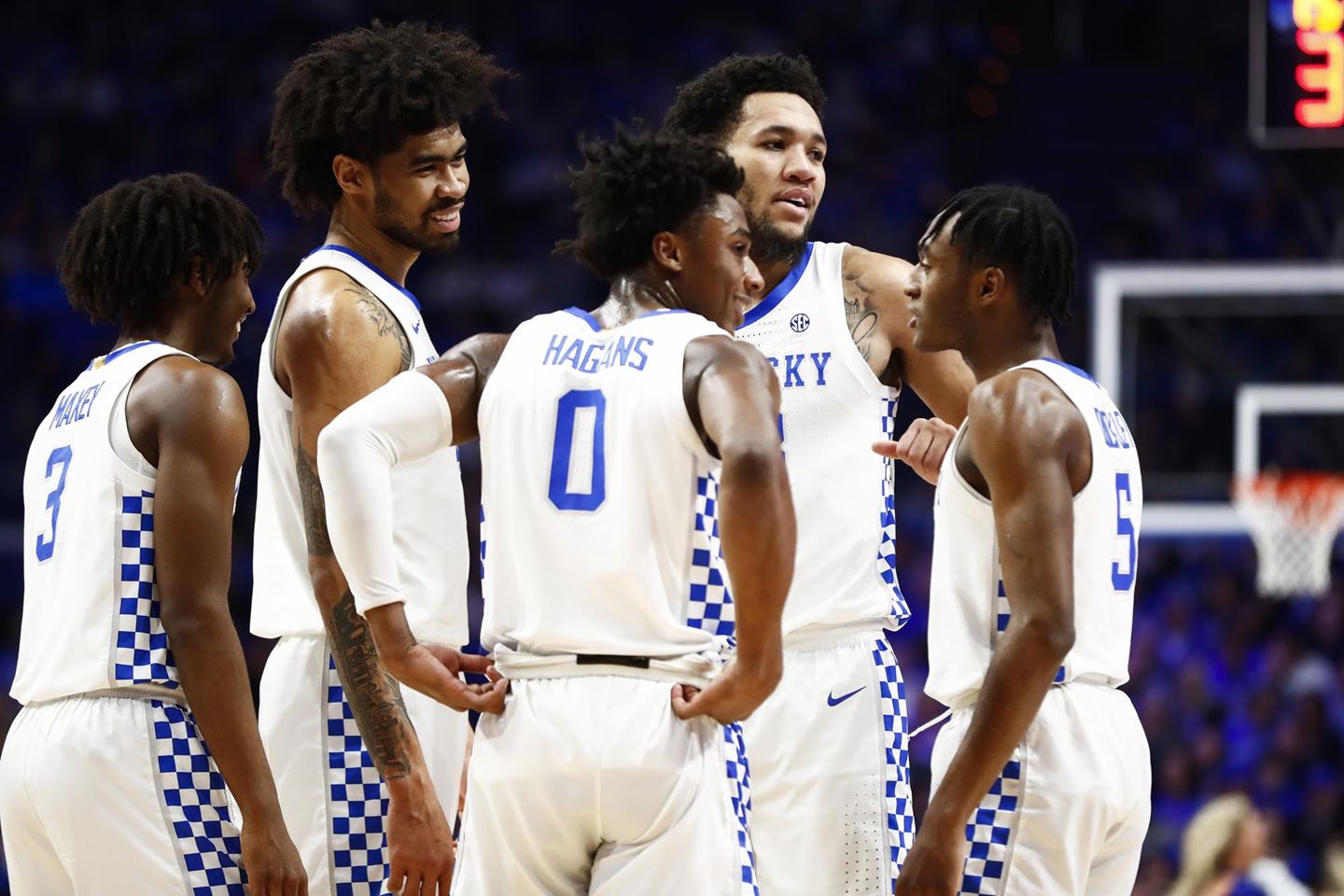 Tyrese Maxey was among the list of players invited to participate, but opted out

With Kentucky players dominating the 2020 NBA Playoffs, the Wildcats will be expected to also be the story at the looming 2020 NBA Draft. It came as little surprise when five former Kentucky men’s basketball players were invited to participate in the 2020 NBA Draft Combine in a uniquely reformatted version due to the COVID-19 pandemic. Five players, Ashton Hagans, Tyrese Maxey, Immanuel Quickley Nick Richards and Kahlil Whitney, were invited to participate.

Kentucky leads all schools with four players set to partake in Hagans, Quickley, Richards and Whitney. Maxey, regarded as a lottery-level selection, similar to in-person NBA Draft Combine options, opted out of participating in this year’s process.

The 2020 NBA Draft is set for Nov. 18 and will air on ESPN. The date is subject to change as circumstances warrant.

The NBA Draft Combine will be conducted both in NBA team markets and virtually, taking place in phases beginning in October through early to mid-November. The reimagined opportunity will provide players and the league to go through interviews, individual on-court programs consisting of strength and agility testing, anthropometric measurements, shooting drills and a “Pro Day” video, all conducted in October at NBA team facilities nearest to the player’s home or interim residence. Medical testing and examinations will be performed by NBA-affiliated physicians in the same market.

Hagans averaged 11.5 points, 6.4 assists, 3.9 rebounds and 1.9 steals per game as a sophomore. He played in 67 career games for Kentucky with 59 starts. He boasted double-figure scoring in 20 games in 2019-20, including a career-high 26-point performance in the win over Utah Valley. Hagans dished out three or more assists in every game he played this season and recorded five or more in 22 outings, including a career-high-tying 12 vs. UAB. His streak of 10 games with six or more assists midway through the season was the best run by a Wildcat since Roger Harden dished six or more in 12 straight in 1986.

With 351 career dimes, Hagans ranks 12th in program history in assists. His 5.24 career assist average ranks fourth in the school record book. Hagans’ assist average this season ranked 16th in the country and tops in the league. He was named the Southeastern Conference Co-Defensive Player of the Year in 2019 and was once again UK’s best on-ball defender this season with a team-high 58 steals. He made the SEC All-Defensive Team again in 2020 and was one of four finalists for the Naismith National Defensive Player of the Year. With 119 swipes in 67 career games, Hagans averaged 1.776 steals per game for his career. That rate is third all-time in program history, trailing only Rajon Rondo and Derek Anderson.

Maxey’s 26 points in the 1-2 matchup vs. Michigan State topped Terrence Jones’ 25 points against East Tennessee State in 2010 for the most points by a freshman in his debut as a Wildcat. Against Louisville, he made a career-high nine field goals (on 14 shots), sunk a career-best four 3-pointers and tied a career high with seven rebounds. His 27 points were the most by a UK freshman vs. Louisville and the most by a Wildcat in the rivalry since Jodie Meeks score 28 on Jan. 4, 2009.

Accentuated by six 20-point performances, Maxey scored in double figures in 22 games. The league’s coaches picked him for the All-SEC Second Team and the SEC All-Freshman Team. He was also a three-time SEC Freshman of the Week selection and both the NCAA March Madness National Player of the Week and the U.S. Basketball Writers Association Wayman Tisdale National Freshman following the win over Louisville.

Quickley will head to the professional ranks after becoming one of the best scorers in college basketball in 2019-20. The SEC Player of the Year led the Wildcats with 16.1 points per game and ended the season on a 20-game double-figure scoring streak. Quickley was named an All-American by several outlets after a breakout 2019-20 campaign. The Athletic, CBS Sports and Bleacher Report all tabbed the sophomore guard with All-America Third Team distinction.

He scored in double figures in 26 of the 30 games he played in and topped the 20-point plateau in eight. The 6-foot-3 guard made a team-high 62 3-pointers — including making a 3 in 28 games and 11 straight to end the season — and shot a team-high 42.8% from behind the arc after a slow start. The Maryland native’s 20-game double-figure scoring streak to end the season is the best run since Malik Monk scored in double figures in 30 straight games during the 2016-17 season. During the 20-game stretch, Quickley scored 20 or more points eight times and made three or more 3-pointers seven times, including a career-high eight at Texas A&M.

What those stats don’t fully reveal is just how clutch Quickley was. Two of the best examples were at LSU and at home vs. Florida. He scored 14 of his team-high 21 points in the second half in Baton Rouge, Louisiana, which included making all five field-goal attempts and dishing a pair of assists. At home vs. Florida, he scored 22 points in the second half, including 20 of Kentucky’s 28 points when the Wildcats fell behind 40-33. He finished with a game-high 26 points vs. the Gators.

Quickley made 92.3% at the free-throw line, which ranks second in school history, just behind Tyler Herro’s school record set in 2018-19 of 93.5%. His .895 career average is the best in school history.

Richards enjoyed the most productive season of his career. After averaging 4.5 points, 3.9 rebounds and 1.1 blocks over 13.4 minutes a game in the first two seasons of his career, Richards turned into an All-SEC First Team player in 2019-20. The junior led the team in rebounding (7.8 per game), blocks (2.1 per game) and double-doubles (10) to go along with a conference-high .644 field-goal percentage and 14.0 points per game. His field-goal percentage ranked fourth in the nation.

Richards also led the Wildcats with 66 blocks, including 18 games with multiple rejections. He blocked seven shots vs. Lamar, the first Wildcat with seven or more swats since Karl-Anthony Towns in 2014-15 and he blocked six at LSU. As Richards went in 2019-20, so did UK. Kentucky was 22-2 when he scored in double figures, 10-0 when he grabbed double-digit rebounds and 7-1 when he blocked at least four shots.

In three seasons, Richards concluded his career third in program history with a career field-goal percentage of .628 (with a minimum of 50 attempts), 10th with 146 career swats and 46th with 528 rebounds.

Richards played well early in the season, but his meteoric rise began vs. Louisville and continued into the conference season. Against the Cardinals’ frontline, one of the best in the country, Richards delivered. The 6-foot-11 big man secured a double-double with 13 points and 10 rebounds. The double-double was Richards’ first against a ranked opponent in his three seasons. In 20 games prior vs. ranked foes, Richards averaged 3.8 points and 3.9 rebounds per game. He had never recorded double-digit scoring or rebounding numbers against a ranked opponent. Richards did it again vs. nationally ranked Texas Tech with a monster 25-point, 14-rebound, four-block performance.

Whitney appeared in 18 games for the Wildcats in an abbreviated season. He averaged 3.3 points and 1.7 rebounds per game. Whitney started the first seven games of the season for the Wildcats, including scoring a career-high 11 points in the win over Eastern Kentucky. He had nine points with a pair of steals in the victory over Mount St. Mary’s. Whitney went 3 for 4 from the floor with seven points against Fairleigh Dickinson and matched that scoring output against Utah in Las Vegas.

A sixth UK player, EJ Montgomery, departed following a two-year career to pursue a professional career. Although he was not invited to the 2020 NBA Draft Combine, he possesses a makeup that is attractive to NBA teams.

Kentucky has enjoyed unprecedented success at putting players in the NBA under Calipari. In the 10-plus seasons of the Calipari era, 38 players have been selected in the NBA Draft, more than any other school. Included in the recent run are 29 first-round picks, three No. 1 overall selections (Anthony Davis, Towns and John Wall) and 21 lottery selections. A staggering 29 players from Kentucky were on NBA opening-day rosters (including two-way and inactive lists), the most of any school.

Calipari’s players are not only reaching the next level, they are succeeding when they do. His players have garnered 22 All-Star selections. Derrick Rose (from Memphis) was named league MVP in 2011. Five of his players have been tabbed All-NBA (Rose, Wall, Davis, DeMarcus Cousins and Towns), three have been named NBA Rookie of the Year (Rose, Tyreke Evans and Towns) and 14 players from Calipari’s first 10 teams at Kentucky have made the NBA All-Rookie teams. UK has produced more All-NBA players, more NBA All-Rookie and more NBA All-Defensive players than any other school in the Calipari era.