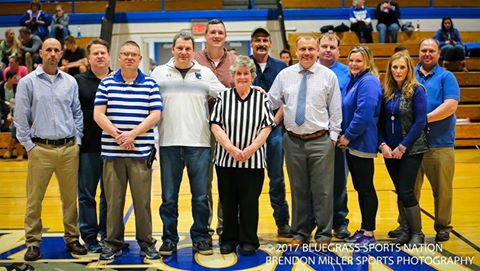 Wolfe County honors back to back winners

The Wolves would still only have one senior on the 1986 roster but seemed poised to compete in the District and Region. Coach Bob Creech’s team did not disappoint as they rolled through the regular season District Tournament with a perfect 6-0 record. At that time, Wolfe County was in the 56th District with Powell, Lee and Owsley County. Coach Creech began to employ a run and gun style of offense, along with a relentless press with the experienced, yet still young Wolves. This style of hardnosed play and effort begin to draw fans to this team in a way the community and the team had never before seen. Wolfe County topped the century mark for points (100+) eight times that year and was one of the leading scoring teams in the state, en route to a 22 win season. Wolfe County brought home the District Championship with a win over Powell County in the finals but would be lose a heartbreaker to Knott County Central in the first round of the 14th Region Tournament.
The following season (1986-87) started with very high expectations as the Wolves returned 4 starters, and 8 of their top 9 players from Coach Bob Creech’s 1986 District Championship Team. As a preview of things to come, the Wolves stunned the basketball world that summer by bringing home a team championship at the prestigious Bolus/Bones Blue-Chip Camp on the campus of Northern KY University. Several Wolfe County players received All-Star recognition at the camp which was filled with All-State players (such as future KY Wildcats, Deron Feldhous, John Pelfrey, Sean Sutton) and Top Ky teams; Mason County, Pleasure Ridge Park, Paintsville, Pulaski County and Washington County). No doubt this strong summer showing elevated the hype in the State for the Wolves and vaulted Wolfe County to the pre-season #1 ranking in 14th Region in many polls and pushed them to as high a pre- season rank of 12th in the State of Kentucky. The 14th Region, as a whole, was regarded as one of the strongest Regions in the State that year with Knott Co. Central rated pre-season 18th in the State and Hazard, coming off a Final 4 run in the State Tournament, was ranked 21st in the State and MC Napier (who made the final 4 of the State-Tournament just 2 years prior) checked in at #25 in the State. The Wolves started their season slow as injuries kept them from running full steam, and lost 3 of their first 9 games before they started to click. Despite the slow start, the Wolves continued to play in front of packed gyms as the fans and community remained behind the team 100%. In mid December, Wolfe County traveled to the All-A Tournament in Newport and won their first game before losing on a half court shot at the buzzer to Paris (who would eventually win the tournament). Even with the loss, it was clear that Wolfe County had found their groove, as the rolled into a Christmas Tournament at defending state Champion, Pulaski County. The community support for this team was at an all time high as a large contingent of Wolfe Contains traveled to the 4 day tournament in Somerset to support the Wolves and they were not disappointed as Wolfe County stunned the field by reeling off wins against Somerset, Lexington Bryan Station and Middlesboro to take home that tournament championship. Those wins (in a tournament field that also featured eventual State Champion Clay County and defending State Champion, Pulaski County Marrons) proved to be a springboard for the rest of the season as Wolfe County would not lose another regular season game, winning a total of 16 straight games going in to the postseason. The Wolves would enter the 56th District Tournament for the 2nd straight year with an undefeated record against District Teams (6-0) and would again win the District Tournament Championship and head into the 14 Region Tournament, boasting a 27-4 record. Wolfe County would run past Whitesburg (now Letcher Co. Central) in the first round of the tournament before squaring off with tournament host, the Hazard Bulldogs. Many Wolfe County fans (and players) still feel the sting of that loss as the regional tournament was originally scheduled to be held at Knott Co. Central, but two weeks prior to the tournament start, it was moved to Hazard. Wolfe County fought hard in the game against the home team, but eventually lost to Hazard Bulldogs by 2 points in overtime in front of what many basketball historians in the Region have said was the most attended basketball game in the history of the 14th tournament (Approx. 500 fans were actually turned away from the gate as the recommended seating capacity for Memorial Gym was actually exceeded by 200 people, early in the afternoon of the game). The season did not end the way the Wolves had dreamed of, but there is no denying the accomplishment they achieved, and the memories they made, over a magical two-year run.