Wolfe Repeats as 14th Region All A Champs 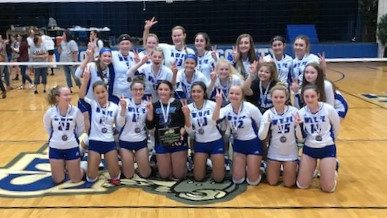 Another “All A” 14th Regional volleyball tournament is in the books and for the second straight year it will be the Wolfe County Lady Wolves advancing to the state competition at EKU. The Final Four was held on Saturday.

In the first semifinal, the Lady Wolves got off to a fast start against Knott County Central. Led by the strong play of Junior hitter, Liz Stokes, the Lady Wolves took the first two sets 25-1 and 25-15. The Lady Patriots fought back and battled hard in set three but Wolfe Junior, Hailey Stone got two late kills to swing the momentum for the Lady Wolves to squeak out the straight set win 25-21.

In the second semifinal, the Lady Eagles of a Leslie County beat the Jackson City Lady Tigers in four sets. The Lady Tigers kept this one close throughout, but Leslie senior Middle Ryleigh Napier was the difference maker down the stretch. Napier attacked the net and kept the Jackson City hitters off balance with strong defense. Leslie prevailed 3-1 (25-13, 25-22, 18-25, 25-18) to advance to take on Wolfe.

In the first set of the Final, Wolfe got off to another hot start, taking an early seven point lead over Leslie County then cruising to a 25-13 win with senior Libero Ellie Halsey serving strong and playing inspired defense. The Lady Eagles fought back in the second frame but late errors proved costly and the Lady Wolves escaped 25-23. Wolfe was in command throughout the final set. Freshman setter, Ginger Johnson connected with assists to four different hitters and the Lady Wolves finished off the Lady Eagles 25-17.

Wolfe Finished the day as Repeat Champions without dropping a set!!!

Coach Ben White on his team’s play, “Adversity causes some people to break… it causes others to break records! This team has came together better than any I’ve ever coached. They are so young but yet so poised. Led by one senior Ellie Halsey who is strong and stern and all about the program motto “WE OVER ME”… to her it’s all about “US” FIRST and that has spread among the whole team! These youngsters play at a high level FOR each other ! They told me yesterday…. “WE KNOW WE HAVE TO DO THIS TOGETHER” I’ve always told them… when nobody leads teams are not very good. When Coach leads teams can be good. When players lead teams can be great!!! This team is so fun to coach and so fun to watch! I’m so exited for them to be going BACK to the All A state tourney!!!