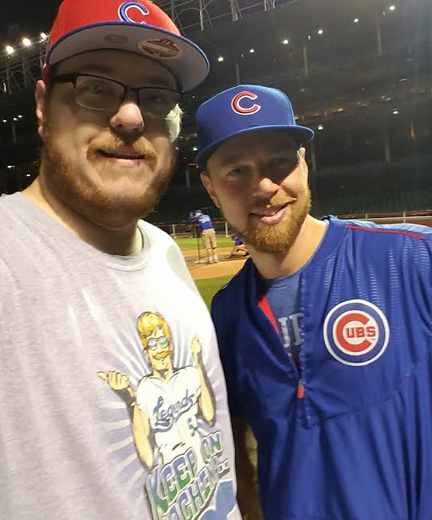 Ben Zobrist will forever be remembered as the Most Valuable Player in the 2016 World Series, in which the Chicago Cubs claimed their first championship in 108 years. He batted .357 in the Series with 10 hits in 28 at bats, and his 10th-inning double in game seven put the Cubs ahead for good.

Lexington Legends fans will also remember him as one of their own. Zobrist, as a Houston Astros’ prospect, played for the Legends in 2005.

Zobrist played in 68 games for the Legends, who were an Astros affiliate at the time. He batted .304 with two home runs and 32 runs batted in before being promoted to Salem in the advanced-A Carolina League. Among his Legends teammates in 2005 was San Francisco Giants outfielder Hunter Pence. Zobrist and Pence were named to the Legends Hall of Fame in 2009.

During his time with the Legends, he formed a lasting friendship through the Legends’ host family program with the Ferry family of Lexington – Lance, Diane, and their son Ryan, who was 13 at the time. Players generally do not live with host families, but the families do provide a local connection for the players outside of baseball, and can provide assistance on a variety of matters when needed.

Zobrist turned 24 in 2005, and that age is on the upper end of the range for South Atlantic League players.

“It was more an adult-to-adult relationship” because of that, Diane Ferry recalled. It also made it easier for Zobrist to become, in effect, a big brother to Ryan.

“Ryan really looked up to Ben as a mentor,” she said, “and Ben took that relationship seriously.   He became the big brother that Ryan didn’t have. They bonded over baseball and their love of equipment and shoes. That relationship and our friendship with Ben continues through the present.”

Zobrist played his last game for the Legends on June 26, 2005, but the Ferrys have not only stayed in touch, they have traveled to see him play at various stops made by his minor and major league teams.   They had an opportunity to spend some time with him during the 2016 season when the Cubs played in Cincinnati, and they have become friends with Zobrist’s parents, who still live in Eureka, Illinois, where Ben grew up.

“As baseball fans, we never miss watching the post-season games, and again this year, we were obsessed with them, just like last year when Ben played for the Royals,” Diane Ferry said. “The final game this year was so exciting. There was very little sleeping at our house after the game.”

“We were not surprised but so pleased to see the Cubs win, and to see Ben honored as the MVP of this World Series,” she added. “Ben is typically a humble and low-profile type of player and we are thrilled to see him get the recognition he earned and that he deserves.”

“The long-standing relationship between Ben and the Ferrys is an indication of just how meaningful the host family can be to a young player,” said Legends’ President/CEO Andy Shea, who was in his first year as a Legends employee when Zobrist played for Lexington.   “Of course, everybody in the Legends family is proud of Ben and all he’s accomplished. He was outstanding on and off the field when he was here, and now fans everywhere know that as well.”