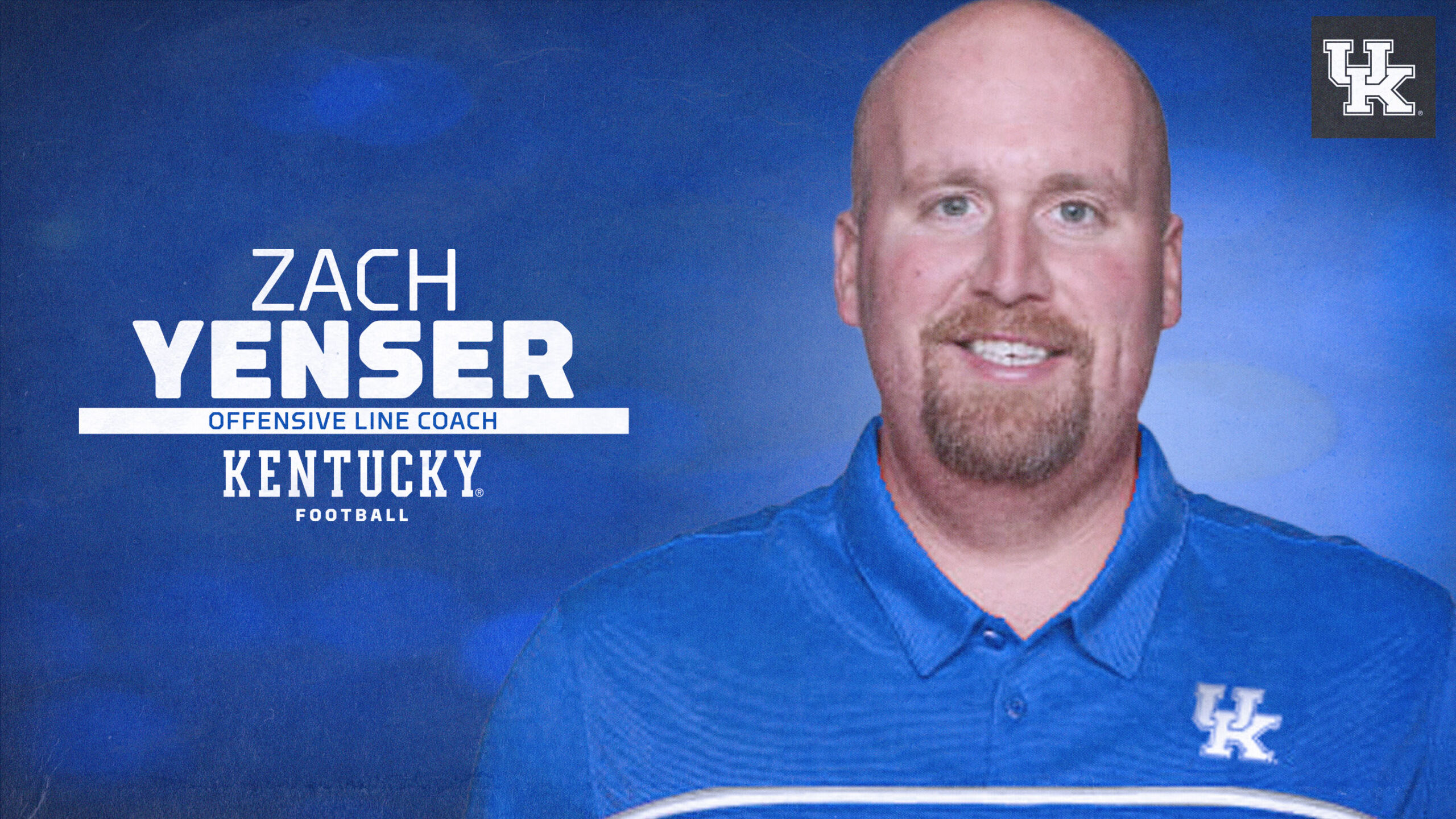 Kentucky native, who learned under John Schlarman at Troy, joins the staff after an impressive resume in the pro and collegiate ranks

Kentucky native, Zach Yenser, who has an impressive resume in the professional and collegiate ranks, has been named the new offensive line coach at Kentucky, head coach Mark Stoops announced Tuesday.

Yenser, originally from Fort Mitchell, Kentucky, returns to his home state after three seasons with the 49ers. Prior to that, he spent three seasons at Kansas (2015-17) as the run game coordinator/offensive line coach and had coaching stints at Southern Methodist (2018), California (2013-14), Louisiana Tech (2010-12), Colquitt County High School (2009) and Henderson State (2008). He began his coaching career as a graduate assistant at his alma mater Troy University in 2007, working with special teams and the offensive lineman under former Wildcat and beloved UK assistant coach John Schlarman.

“Zach is an incredible hire,” Stoops said. “He checks all of the boxes and is the total package. He grew up in Kentucky, he’s connected to John Schlarman, he has great relationships with people and is well-thought of in recruiting. He has college coaching experience and has spent the last three years in the NFL with the 49ers, an organization I greatly respect. This is a high-caliber hire and I couldn’t be more excited to have him coaching our offensive line.”

This season, Yenser worked with offensive line coach Chris Foerster, helping the 49ers finish 10-7 in the regular season and advance to the NFC Championship Game for the second time in three seasons. The offensive line did not allow a sack during postseason play, the first time a squad hasn’t allowed a sack in two or more postseason games since the New England Patriots in 2018. San Francisco ranked seventh in the NFL in total offense (375.7 yards per game), averaging 248.3 passing yards and 127.4 rushing yards per game.

Yenser, 38, spent two seasons with offensive line coach John Benton, and the 49ers offense averaged 370.2 yards per game (118.1 rushing yards; 252.1 passing yards) and ranked tied for 10th in the NFL with 19 rushing touchdowns in 2020. The offensive line was anchored by All-Pro tackle Trent Williams, who was named to his eighth Pro Bowl.

In 2019, San Francisco’s offense become one of the best in the NFL. The 49ers finished second overall in rushing yards per game (141.1) and fourth in the NFL in total offense (381.1 yards per game). The team’s success on the ground continued in the postseason, as the 49ers offense rushed for an average of 204.0 yards per game. The 49ers finished the season with an NFC-best 13-3 record, winning the NFL Championship to advance to their seventh Super Bowl in franchise history, their first since 2013.

“My family and I would like to thank Coach Stoops and the University of Kentucky for this opportunity – an opportunity I don’t take lightly,” Yenser said. “This job just means more. As a Kentucky native and someone who worked for Coach Schlarman, it is a privilege to continue his legacy, success and the building of the Big Blue Wall.”

In 2013, Cal’s offense finished the regular season ranked third in the Pac-12, averaging 331.4 yards per game. The 5,443 yards of total offense by the Bears was the third-highest in school history and its 453.6 average yards per game ranked fourth all-time. Over the team’s final five games of the season, the Bears averaged 37.8 more rushing yards per game than it had the first seven games.

Before arriving at Cal, Yenser spent three seasons at Louisiana Tech under head coach Sonny Dykes, first as a graduate assistant working with the offensive line (2010-11), followed by one season (2012) as the team’s assistant offensive line coach. In 2011, the Bulldogs were the Western Athletic Champions, finishing with an 8-5 overall record. La Tech appeared in the San Diego County Credit Union Poinsettia Bowl that season, their first bowl appearance since 2008.

In 2012, Louisiana Tech finished with a 9-3 record and led the NCAA in both points per game (51.5) and total offense (577.9 yards per game) in addition to ranking third in passing yards per game (350.8). Yenser helped three players earn First-Team All-WAC honors during his three seasons at Louisiana Tech, with OL Stephen Warner earning the recognition twice (2011-12) and OL Kris Cavitt (2011) and OL Jordan Mills (2012) each being named First-Team once. OL Oscar Johnson and OL Kevin Sia added Second-Team All-WAC honors in 2012. Despite one of the best seasons in school history, the team did not accept a bowl bid in 2012.

In 2009, Yenser was an assistant coach at Colquitt County (Norman Park, GA) High School, where he helped guide the Packers to an 11-3 record and an appearance in the Georgia 5-A state semifinals. In 2008, he served as the offensive line coach at Henderson State University.

As a graduate assistant under Schlarman in 2007, Yenser helped the Trojans lead the Sun Belt in both points per game (34.0) and yards per game (452.8). Troy went on to earn a share of the Sun Belt Conference title with an 8-4 record.

His admiration for all things Kentucky started at an early age as his mother, Becky Morrison Yenser, graduated from UK in 1979. After living in the Commonwealth until the third grade, Yenser’s family moved to Georgia where he became an All-State center and long snapper at Harrison High School in Kennesaw, Georgia.

He went on to play his freshman collegiate season at East Tennessee State before transferring to Troy, where he earned a starting spot at center on the offensive line from 2003-06. He appeared in 42 consecutive games during his career, helping the Trojans win the Sun Belt Conference and the New Orleans Bowl as a senior in 2006. That season, he was voted a team captain by his peers and was named a First-Team All-Sun Belt selection.

Yenser graduated with a bachelor’s degree in communication and fine arts from Troy in 2007 and later earned his master’s degree in science with a concentration in sports performance from Louisiana Tech in 2012.

He and his wife, Beth, have two sons: Graham and Max.