Baalman Walks Off No. 11 Kentucky, Vick 5-for-5 in Extra-Inning Win 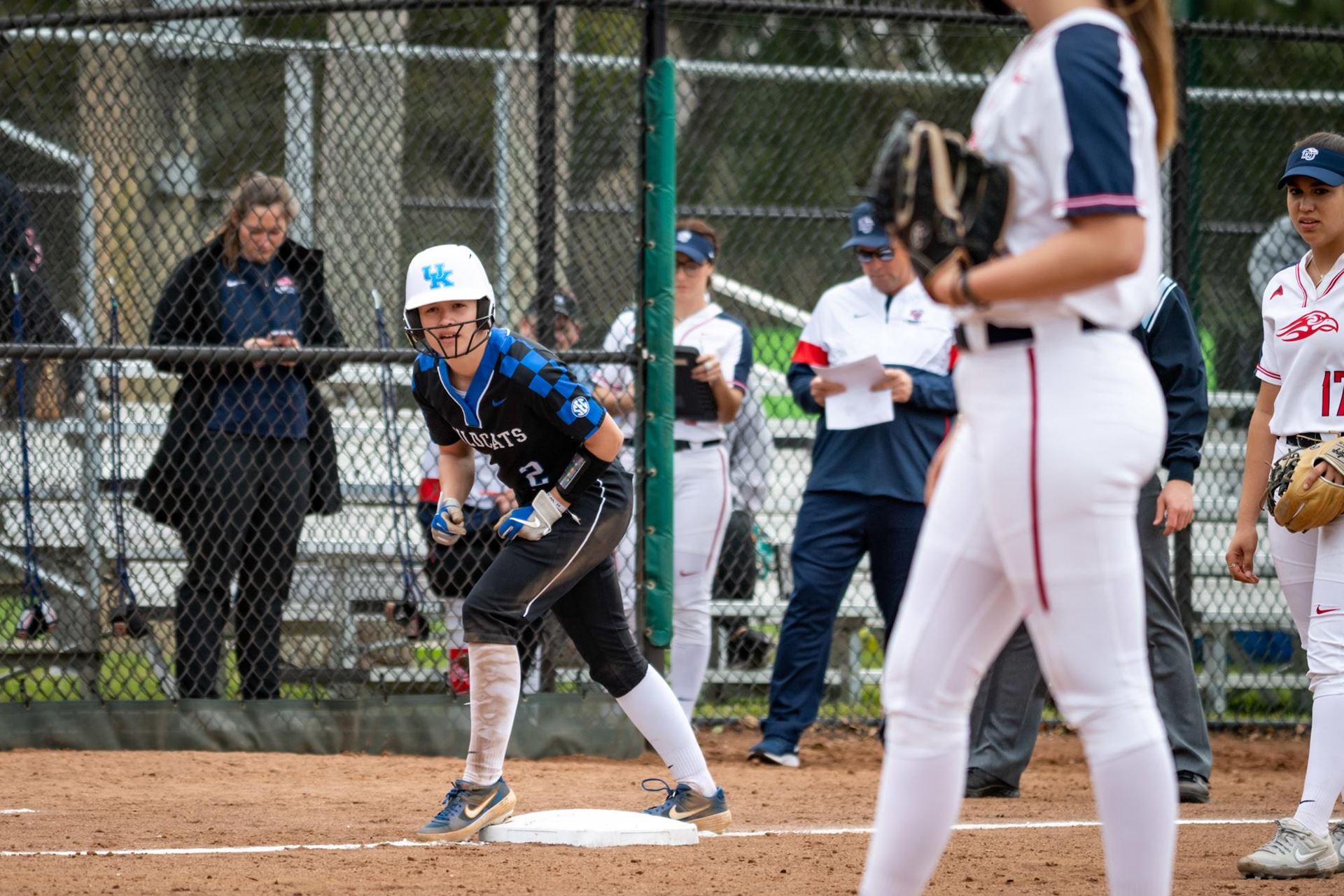 Pitcher wins her own game with 10-9 win

HOMEWOOD, Ala. – Junior pitcher Grace Baalman walked off a wild 10-9 game in the bottom of the eighth inning for the No. 11 Kentucky Softball team on Friday afternoon. Baalman also won the game in the circle, throwing the final three innings, allowing just one run on four hits.

Bailey Vick went 5-for-5 at the plate in the game for Kentucky, as the senior left fielder tied the game in the bottom of the seventh with two outs to push the Wildcats even at 9-9 down to their last out. She has now upped her season average to .633 through the first 11 games of the season.

The lead changed three different times in the game, and had four ties in the course of the three-hour and two-minute affair.

Kentucky improves to 9-2 on the young season and Georgia Tech falls to 3-7. Baalman moves to 3-1 as the pitcher of record this season.

The Wildcats will play its second game of the Samford Tournament at 7:30 p.m. ET tonight live on ESPN3 against hosts Samford.

Key Stat
10. For the third time this season, Kentucky scored 10-plus runs.

5. Bailey Vick went 5-for-5 in the game, marking the first time in her career that she has recorded five hits in a game.

Key Play
The key play in the game was Mallory Peyton’s grand slam with one out in the bottom of the third inning to take a 4-1 deficit and turn it into a 5-4 lead for Kentucky. The long ball was Peyton’s sixth homer of the season and she collected RBI’s number 10, 11, 12 and 13.

Key Player
Bailey Vick was the key player, going 5-for-5 with two runs score, two RBI and a nice catch at the wall in the seventh inning.

Run Recap
Georgia Tech scored in the top of the second inning off a Kennedy Cowden sacrifice fly. GT 1, UK 0

The Yellow Jackets added on four runs in the top of the third thanks to a two-RBI single with two outs and a hit by pitch with the bases loaded. GT 4, UK 0

In the bottom of the third, Bailey Vick got the Wildcats on the board with an RBI single off the glove of the second baseman up the middle to score Jaci Babbs. After a Rylea Smith double and Alex Martens reaching, Mallory Peyton hit a grand slam, her first of the season and first for UK this season. UK 5, GT 4

A walk and a single proved costly in the fourth as an RBI groundout gave the Yellow Jackets a 6-4 lead. GT 6, UK 5

Kentucky re-took the lead in the bottom of the fourth as Rylea Smith and Alex Martens had RBI singles to score Kowalik and Vick in back-to-back at bats.  UK 7, GT 6

The Yellow Jackets tied the game in the top of the fifth on an RBI single with two outs to score a lead-off double from Cowden. UK 7, GT 7

Kentucky responded in the bottom half of the sixth as Kayla Kowalik was hit by a pitch to lead off the inning and cored on a Rylea Smith RBI groundout. UK 8, GT 8

Georgia Tech took the lead in the top of the seventh on a lead-off home run. GT 9, UK 8

With UK down to its final out in the bottom of the seventh, Kayla Kowalik doubled to the wall in left center and the hero of the game, Bailey Vick, scored her on a single to left. UK 9, GT 9

With the bases loaded and one out in the bottom of the eighth, Kentucky won the game a Grace Baalman lifted a ball to right field and it was dropped, but would have been deep enough to score the runner from third, regardless. FINAL – Kentucky 10, Georgia Tech 9