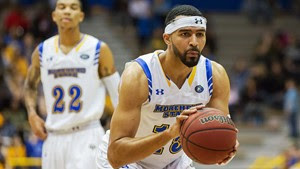 MOREHEAD, Ky. – Former Morehead State men’s basketball center Dejuan “Rico” Marrero has put pen to paper on a contract to play professionally for the Pully-Lausanne Basket LNB basketball club in Lausanne, Switzerland.
The hoops club in the nation of premier chocolatiers is one of eight teams that is fielded in Switzerland’s national basketball league.

“I’m blessed and thankful to have God on my side throughout my entire journey,” said Marrero. “It means so much to be able to continue to live my dream of playing professional basketball. I had my first tour in Puerto Rico in the spring, I learned a lot, and I now have a better sense of what to expect going forward, both on and off the court.”

The Gary, Indiana native is heading to Europe after having completed a season of professional competition in Puerto Rico, playing for the Guayama Brujos.

Marrero’s top performance as an Eagle came in the “Show Me” State, when the Eagles took on Southeast Missouri in Cape Girardeau. On Feb. 4th, 2017, the forward poured in his best performance of his collegiate career, draining 24 points on 11-of-21 shooting, pulling in 12 rebounds and dishing out five assists.

“From my days coming out of high school to where I am today, I’m thankful for all the support and knowledge I’ve inherited over the years from friends and family. I am especially grateful for all of the coaches who have bestowed their expertise; I wouldn’t be entering this next phase of my journey without them.”