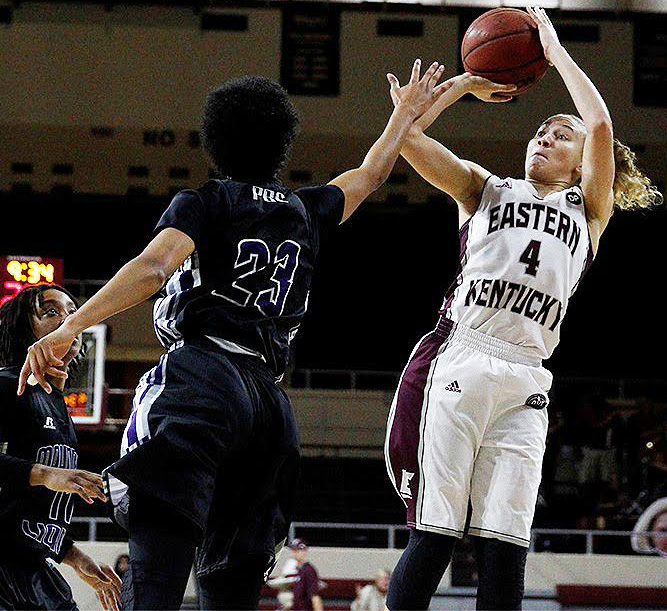 RICHMOND, Ky. – The Eastern Kentucky University women’s basketball team never trailed on its way to a 65-61 win over Young Harris College in its lone exhibition match of the season.

The Colonels led by as many as 21 in the contest, as senior Jalen O’Bannon paced the Colonels with 17 points. Redshirt senior Alexus Cooper added 16 points in the win.

EKU opened on an 8-0 run after Cooper netted the first six points of the contest. The Colonels widened their lead to 17-6 in the opening frame, as Shavontae Naylor and O’Bannon got on the board during a 14-4 EKU run to start the game.

Eastern used an 11-0 run in the second stanza to widen its lead to 34-18 at the break. Junior transfer Marcella Rocha connected from deep to give the Colonels a 10-point lead at 22-12. Following a Young Harris basket, Rocha netted a jumper to ignite the EKU run.

An acrobatic lay up from senior Mariah Massengill in the lane capped the EKU run, as the Colonels held a 33-14 advantage late in the opening half. A free-throw from senior Zee Willix put the Colonels in front, 34-16, before Jenny Vernet scored her sixth point of the first half for the Mountain Lions.

EKU slowly added to its lead in the second half, as a deep ball from Cooper gave the Colonels a 21-point lead— its largest of the contest— with 7:03 to play in the third.

In the final frame, Young Harris slowly chipped away at the EKU lead but the Colonels clinched the win.

The Colonels were voted to finish third in the Ohio Valley Conference in both the media poll and the coaches’ poll. EKU picked up two wins in the OVC tournament before falling to Belmont in the title game.

The Colonels open the regular season on Friday as they host Bowling Green State University. Friday’s opener is scheduled for a 5:30 p.m. tip from McBrayer Arena. Season tickets are available for purchase online or in the EKU Ticket Office.