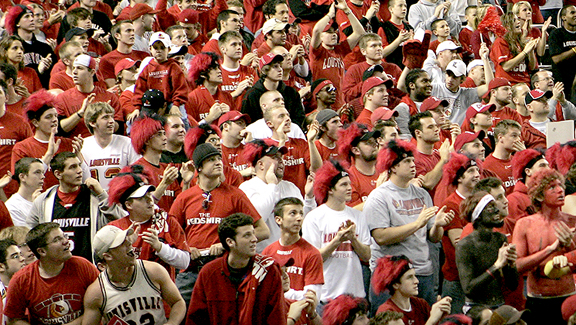 LOUISVILLE, Ky. — Jordan Nwora, a talented  6-8, 215-pound forward from Buffalo, N.Y., has become the fourth individual to sign a national letter-of-intent to continue their basketball playing careers at the University of Louisville.

Nwora (pronounced nuh-WOR-uh) averaged 23.4 points and 10.1 rebounds as a senior last season in leading The Park School in Buffalo, N.Y. to the Manhattan Cup Class A final, where his team fell by two points in overtime to eventual state champion Canisius.  He will play his final prep season at Vermont Academy in Saxtons River, Vt.

“Jordan epitomizes what we were seeking in this class,” said UofL Coach Rick Pitino.  “At 6-8, he can play three different positions — the two, three or four.  We base all of our rankings on potential; not where individuals are now, but how much growth that they have in their game.  Jordan has outstanding shooting, passing and ball-handling ability.  One of the reasons that we were so upbeat on Jordan is that he has a high percentage of body fat and we felt that he could get that figure down with the rest of our team, then his athleticism would improve immensely.  We think he is one of the finest prospects in the nation and we’re super excited to have him.”

A 1,000-point career scorer at Park, Nwora was impressive during the summer when he averaged 14.6 points per game and shot 39.2 percent from three-point range for The Rens, his AAU squad.

As a junior, Nwora averaged 23.0 points, 6.9 rebounds and shot 42 percent from three-point range in helping Park post a 23-3 record and win its first Catholic High School Athletic Association state championship.  He totaled 29 points and 12 rebounds in the title game over New York City champion Maspeth while earning most valuable player honors at the New York State Federation Tournament of Champions Class B title.

His father Alex Nwora has been the head men’s basketball coach at Erie Community College in Buffalo, N.Y. since 1999.

Before choosing to sign with the Cardinals, Nwora narrowed his collegiate choices to also include such schools as NC State, Cal, Georgia Tech, Marquette and Oklahoma State.  Nwora is one of five Vermont Academy players who signed with Division I colleges today.

Nwora joins three other impressive individuals who have signed with the Cardinals including Darius Perry, a 6-2, 170-pound guard from Powder Springs, Ga. and Wheeler High School in Marietta, Ga.; Lance Thomas, a 6-8, 210-pound forward from Norcross (Ga.) High School; and Malik Williams, a 6-11, 215-pound forward/center from Snider High School in Ft. Wayne, Ind.  Louisville’s class is ranked among the nation’s top five and all four individuals are ranked highly among the nation’s prospects.