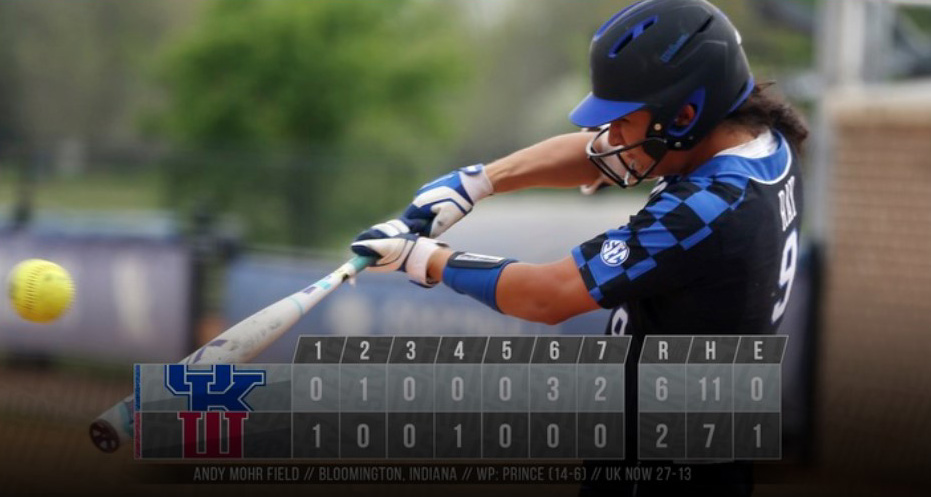 Junior Rebecca Blitz led the Hoosiers offensively with three hits, a run and an RBI. Juniors Aimilia McDonough and Taylor Uden, senior CaraMia Tsirigos and freshman Bella Norton all collected one hit in the game, which was the final non-conference contest of the Hoosiers’ season.

Redshirt sophomore Emily Kirk tossed 6.2 innings, allowing just one run through the first five innings of work before Kentucky scored three runs in the sixth and two in the seventh.

Indiana took a 1-0 lead in the first as Uden singled off Kentucky second baseman Alex Martens glove, plating Blitz who led off the game with a single.

The Wildcats tied it up in the following frame as Breanna Ray brought home Martens on a single to left. Martens scored twice in the game for Kentucky, as did Abbey Cheek.

Blitz put the Hoosiers back on top in the fourth as she singled up the middle to score sophomore Sarah Galovich, pinch running for Norton who had reached on a one-out double to left.

However, Kentucky took the lead back for good in the sixth, scoring a trio of runs on RBI singles by Rachael Metzger and Ray, as well as a bases-loaded walk to Katie Reed. An RBI groundout from Ray and a double by Metzger plated the final two runs of the night for the Wildcats.

Meagan Prince earned the win for Kentucky in the circle, going 5.0 innings with four hits, one run and three walks.

Indiana returns to action this weekend as the Hoosiers play host to Maryland. First pitch of the series is slated for Friday at 6 p.m. and fans are invited to bring dogs to the game as part of Bark in the Park. Admission to all Indiana home games is free of charge.