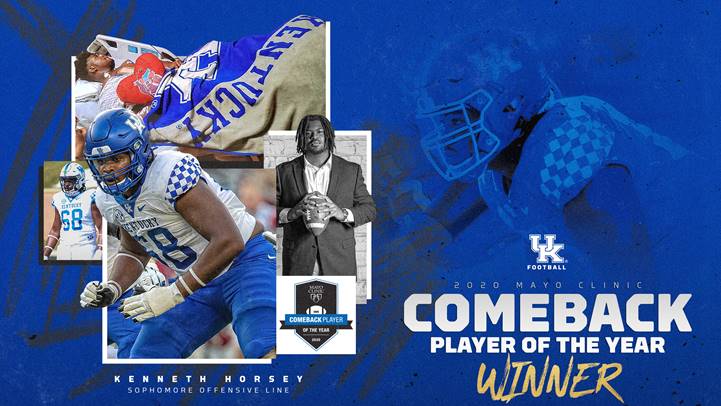 Sophomore offensive guard Kenneth Horsey has been named one of the three 2020 Mayo Clinic Comeback Player of the Year Award winners, it was announced today by The College Sports Information Directors of America (CoSIDA) in association with The Associated Press (AP) and the Fiesta Bowl Organization. Joining Horsey are Jarek Broussard, a sophomore running back at Colorado and senior linebacker Silas Kelly at Coastal Carolina.

Horsey, who hails from Sanford, Florida, has a remarkable comeback story. In the spring of 2018, before he was to arrive at Kentucky for his freshman season, he was complaining of a pain in his side. His parents rushed him to the emergency room where doctors ultimately found a growth on one of his heart valves. He went through open-heart surgery on April 8, 2018 and was even told by a few doctors that football was over. However, Horsey would not be deterred. He came to Kentucky and redshirted the 2018 season with a goal of earning a starting spot on Kentucky’s offensive line, affectionately known as the “Big Blue Wall.” In 2019, he saw action in four games and continued to train and prepare his body for the rigors of the Southeastern Conference. Since his surgery in 2018, he has lost 50 pounds and because of his hard work and dedication, has earned the starting left guard spot on the “Big Blue Wall.” Even a broken left hand, which required surgery during pre-season camp, did not get in the way. He started in eight games played this season, helping the Wildcats rank fifth in the Southeastern Conference in rushing offense (187.4).

“I want to thank God because none of this would be possible without Him,” said Horsey upon learning of being selected the 2020 Mayo Clinic Comeback Player of the Year. “I also want to thank my family and UK football for supporting me and believing in me. I understand that every snap is a blessing and being in this situation has made me a better person, a better Christian, and a better man. I hope I can take the lessons I’ve learned through this process and use them in the future to help others.”

“We were all so concerned when we first learned what Kenneth was going through,” UK head coach Mark Stoops said.  “There was probably some hesitation about returning to play football but to see him come back has really been inspiring. We have seen him get more and more confident and he’s really grown on and off the field. We are so proud and happy for Kenneth.”

More on the other award winners:

Jarek Broussard:  After redshirting in 2018, Broussard, a 5-foot-9, 185-pound sophomore from Bishop Lynch High School in Dallas,suffered a season-ending ACL injury before the start of the 2019 season on the same knee he had ACL surgery on in high school which forced him to miss the entire season. So, after missing his true and redshirt freshman seasons, he started fall camp this year tied for second on the Buffalo’s depth chart.  He quickly claimed the starting job, becoming just the fourth player in Division I-A/FBS since 1996 to open a career with four 100-yard games including 187 yards and three touchdowns versus UCLA and 301 yards vs Arizona. For the season, the Pac-12 Offensive Player of the Year lead the conference with 162.6 yards rushing per game (129 carries – 813 yards – 6.3 avg), added seven receptions for 52 yards to lead conference in all-purpose yards, He completed his remarkable season rushing for 82 yards and two touchdowns versus Texas in the Alamo Bowl.

Silas Kelly:  The 6-4, 230-pound senior linebacker from South Carroll Senior High School in Mount Airy, Maryland broke his hand in the first game of the 2019 season and then tore his ACL in the season’s second game against Kansas during the Chanticleers first-ever win over a Power 5 school.  Following knee surgery, he worked hard to return to spring practice but was forced to have a second operation on his knee in early spring. He was back in the middle for Coastal Carolina to open the 2020 season against Kansas.  The following week versus Campbell he recorded 8 tackles, and two sacks to earn Sun Belt Defensive Player of the Week accolades. For the season he led Coastal Carolina with 80 tackles and added 6.5 TFL, 5 sacks and an interception.

About Mayo Clinic:  Mayo Clinic is a nonprofit organization committed to innovation in clinical practice, education and research, and providing compassion, expertise and answers to everyone who needs healing. Visit the Mayo Clinic News Network for additional Mayo Clinic news and Mayo Clinic Facts for more information about Mayo.

About CoSIDA (College Sports Information Directors of America):  CoSIDA was founded in 1957 and is a 3,000+ member national organization comprised of the sports public relations, media relations and communications/information professionals throughout all levels of collegiate athletics in the United States and Canada.  The organization is the second oldest management association in intercollegiate athletics. To learn more, visit cosida.com.

About Associated Press:  The Associated Press is the essential global news network, delivering fast, unbiased news from every corner of the world to all media platforms and formats. Founded in 1846, AP today is the most trusted source of independent news and information. On any given day, more than half the world’s population sees news from AP. On the web: www.ap.org.