Knott This Year – Breathitt Rolls to Second Round 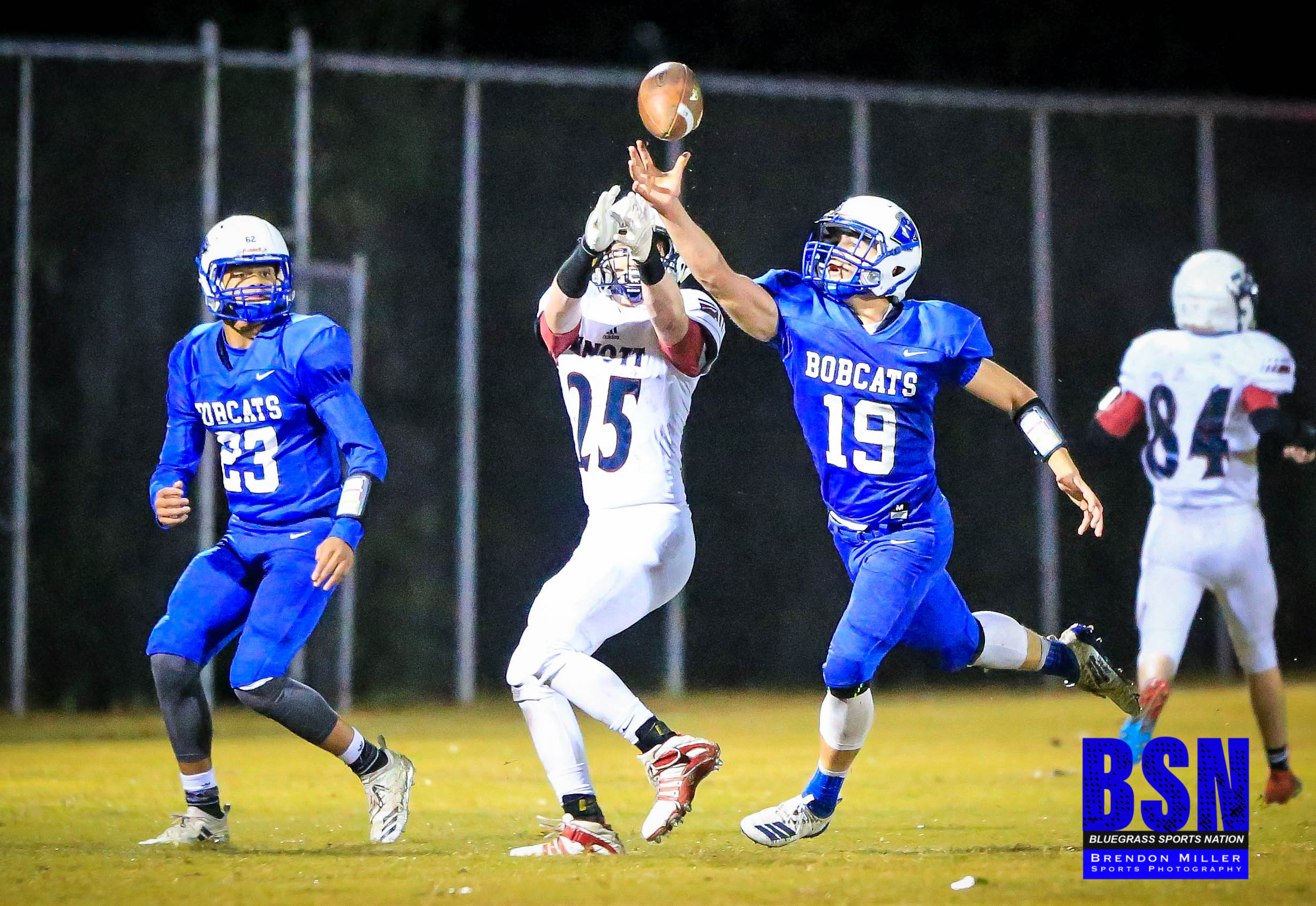 The Breathitt County finished the regular season 10-0 and a top 5 team in Class 2A. That was then, and this in now. It’s PLAYOFF TIME IN THE BLUEGRASS!!!! It doesn’t matter what your record is, or who you have beaten. Everyone starts the playoffs 0-0. It’s win or go home. 5 weeks, one goal, hundreds of teams fighting for the right to be called State Champs.

Breathitt’s road to Kroger began Thursday night as they hosted the Knott County Central Patriots. A team that Breathitt ran the clock on earlier in the season. It would seem like déjà vu as the Bobcats once again put a running clock on the Patriots. This time however, Knott County requested a running clock at 21-0. The biggest win for the Bobcats in this one was coming away injury free.

Breathitt eventually won the game 48-6. Play of the night had to be Lane Weddle’s pick-6 as he caught the ball at his highest point and proceeded down the sideline for a touchdown. Breathitt County’s defense has only allowed 96 points all season. 22 of them came last week again Pike Central. That’s an average of just over 8 points a game. The performance had its low points with some mental mistakes in all phases of the game. The Bobcats muffed a punt in the first quarter and fumbled the ball on an option play. The Bobcats also had some mis-ques on extra points, and had several kicks travel out of bounds on Kickoffs. The Bobcats will never apologize for a win, but they have plenty to work on before their 2nd round matchup. Knott County Central ends their season with a record of 2-9.

Focus for the Bobcats quickly shifted from Knott County, to the winner of Leslie vs Middlesboro. The Yellowjackets of Middlesboro came away victorious Friday night and will make the long trip to Jackson for the 2nd round of the playoffs. While Breathitt steam rolled their district in the regular season, the District Championship will be this Friday night on the River Bank. The Bobcats beat Middlesboro earlier in the season 57-7. If that didn’t sting enough, it was on the Yellowjackets home field. Add in the fact that it was their “Hero’s Bowl,” and I’m sure the Yellowjackets are looking for redemption.

Don’t overlook Middlesboro. They are well coached and will be ready to play. As I stated above, the playoffs are a totally different animal. Prime example is the #4 team in 2A based on RPI, Caldwell County. The Tigers were 8-2 entering the playoffs and hosted a Murray High team that they beat just two weeks prior. Murray flipped the script and beat Caldwell County 34-17. Anything is possible in November. Breathitt will need to stay focused and execute a clean football game to advance.

Breathitt County vs Middlesboro for a trip to the Regional Title Game….It doesn’t get much better than that. Kickoff is scheduled for 7:30pm on the River Bank in Jackson, KY. For those unable to attend, you can catch the action on BSN’s broadcast that will start around 7:15. As always check out our website for the latest in high school sports, UK athletics, and the Cincinnati Bengals. You can also stay connected by liking our Facebook page and following us on Twitter.