MSU Volleyball Eagles Collect a Pair of Sweeps on Friday 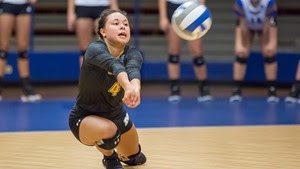 “This was a good day of growth and development for this group,” said head coach Jaime Gordon. “We have been managing a couple of nagging injuries and the way that the team focused and pulled together was great.”

The Eagles got a team-best 13 kills off a .308 hitting day from freshman outside hitter Lauren Rokey in the opening match versus SSU. Defensively, sophomore libero Danielle McCarson had 12 digs and also served up four aces to help her conference-leading stat total. Junior setter/right-side Jordan Jones handled a majority of the play-calling, dishing out 36 assists.

“Against Savannah State we lacked a bit of needed discipline but were able to ride some aggressive serving to gain needed points down the stretch,” Gordon added.

Following a .194 attack effort in the opening set, Morehead State racked up 30 kills and mishit only 11 times in the last two frames.

In the nightcap, the Eagles ran a 6-2 offense with Jones and freshman setter Chandler Clark sharing the duties. Jones had 22 assists and also slammed in 12 kills on a .250 hitting day. The hot hand went to freshman middle blocker Olivia Lohmeier, who landed 12 winners and hit a season-best .556.

Rokey came up with a near double-double, with 14 digs and nine kills.

“This evening we showed a lot of composure and maturity with a pretty young group on the floor at times,” Gordon noted. “Our middles worked extremely hard in transition, opening some great looks for people like Jordan, Lauren, and Olivia. We were able to keep some strong pressure with our service game, giving our defense an opportunity to match up against a very good William & Mary team.”

“While the wins are nice, we need to focus on our performance and continue to build each time we hit the floor,” Gordon said.