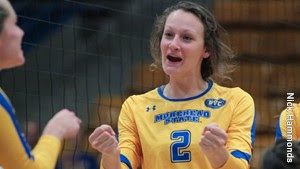 The Eagles slipped to 1-1 after defeating Delaware State 3-0 earlier in the day.

“I think we have a lot of depth on this team,” said head coach Jaime Gordon. ” I think we showed some fight tonight.”

The Eagles also got nine kills apiece from freshman outside hitter Lauren Rokey and sophomore right-side hitter Jordan Jones. After not seeing action in the opening set, Rokey came off the bench to record all nine of her kills, plus three blocks, in the last two frames while hitting a team-best .312. She had seven spikes alone on nine swings in the second stanza.

“Especially in that second set, Lauren really got going, and it really showed that she is capable of big things,” said Gordon. “Maddie did a great job of her lateral footwork and really pressing with her hands.”

The Eagles nailed 14 kills in the first two sets apiece and really heated up in set two with a .294 attack efficiency. The hosts trailed 17-11 in the second set but rallied later to tie the set 24-24 following a Rokey kill and back-to-back blocks by Jones and Fella.

MSU finished with a 59-41 advantage in the dig column and notched 12 team blocks.

The Eagles close the opening-weekend tournament Saturday at 2 p.m. ET against Winthrop.