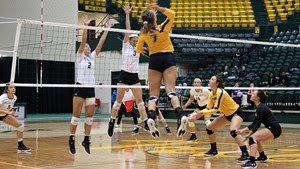 WILLIAMSBURG, Va. — Freshman outside hitter Lauren Rokey recorded a career-best 17 kills, and junior middle blocker Jessie Wachtman contributed a season-best 11 winners, but Morehead State Volleyball could not keep up a fast start and fell 3-1 (25-15, 15-25, 18-25, 14-25) to Davidson to wrap up the Colonial Classic Saturday.

Rokey landed the 17 kills off a team-high 42 attacks. Wachtman was close to perfect, making just three errors for the Eagles (4-3) on 20 swings for a .400 attack efficiency.

The Eagles held the Wildcats to a negative hitting percentage in the first set win but then witnessed the team from North Carolina storm back with 39 kills and only nine errors the remainder of the day. Davidson also made its presence known at the net with 10 blocks.

The Eagles tallied six blocks, led by three assists each from Wachtman and freshman middle Olivia Lohmeier. On the back line, sophomore libero Danielle McCarson and freshman specialist Taylor Hodges combined for 24 of the Eagles’ 45 digs.

Morehead State will return home to host the Comfort Inn-Vitational next weekend. South Carolina State, Middle Tennessee and Troy will take part with four matches on Friday and two on Saturday. The Eagles open with SCSU on Friday at 11 a.m. ET.