No. 21 Kentucky Sweep South Carolina Behind a Blistering Kaz Brown 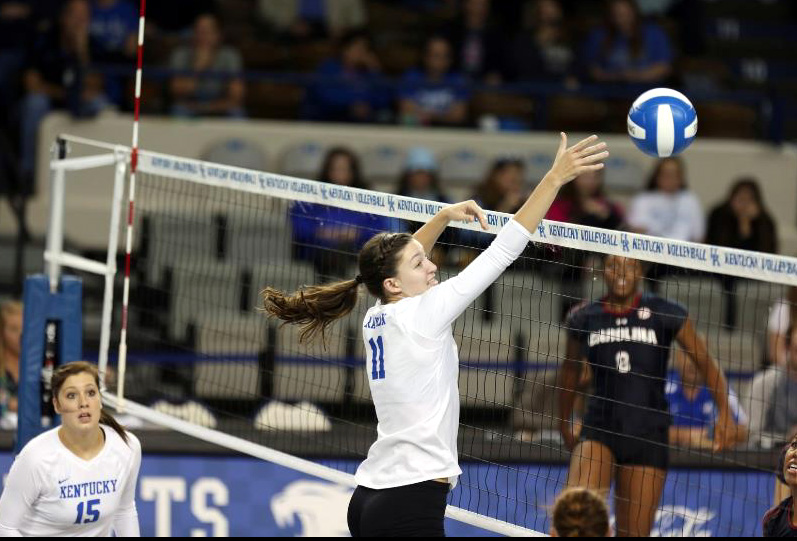 LEXINGTON, Ky. – Behind a night to remember from junior Kaz Brown, the No. 21 Kentucky volleyball team swept South Carolina 3-0, (25-11, 25-20, 31-29). The Wildcats currently hold a 13-match winning streak and are unbeaten in Southeastern Conference play.

Brown had a season-best 17 kills on 20 attempts, good for an .800 attacking clip. No Wildcat had hit above .750 on 10 or more attempts since Morgan Bergren did in 2014 in a match against Arkansas.

“We were very successful in the middle and (on) the right (side) the first time we played USC so it was part of the gameplan to get her (Brown) involved,” head coach Craig Skinner said. “Kaz was hot and we kept feeding it to her. She did a great job in transition of getting up and available. That’s how she has been practicing and it paid off tonight.”

“We have a lot of offensive weapons this year and teams are having a hard time picking and choosing who they are going to defend,” Brown said. “When we pass well and we have three or four options that has been a big help to me and all of the other hitters.”

The 21st-ranked Wildcats also picked up a major contribution from freshman Leah Edmond. The reigning SEC Freshman of the Week earned her fifth double-double with 14 kills and a career-high 13 digs. The Wildcats picked up ????? total kills, one off the 25-point rally era three-set record.

Sophomore Olivia Dailey showed why she has three SEC Setter of the Week honors to her name tonight. Dailey earned her eighth-career match of 40 or more assists with 43 helpers, facilitating the offense to a .339 attacking clip. The Trussville, Alabama native also contributed seven digs.

“Olivia has some of the best hands I’ve ever seen,” Brown added. “She knows where to get the ball and she’s a key part of the offense.”

Junior libero Ashley Dusek led from the backline with a match-high 15 digs and found the double-digit mark once again. Dusek had hit double figures in every contest except one this season. UK had 56 total digs, its highest in a three-set match this season. Five Wildcats – Dusek, Edmond, Dailey, McKenzie Watson and Anni Thomasson – had five or more digs during the match.

Kentucky returns to action on Sunday when the Wildcats head to Missouri for a nationally-televised matchup. First serve is set for 2 p.m. ETand can be seen live on the SEC Network.

The first set was dominated by Kentucky. UK grabbed the lead early with an 8-1 run capped by a Brooke Morgan kill and never looked back. South Carolina only registered back-to-back points once during the set. Brown earned set point with a kill assisted by Dailey to take the first set 25-11. Brown led the way with five kills during the frame and Dailey registered 13 helpers.

The second set was a much different story. South Carolina started the frame on a 6-0 run before Kentucky could respond. Morgan put UK back on track with the first Kentucky point of the set. After closing the USC lead to 6-3, the match went back-and-forth before UK cut the lead to one on a Dailey kill. The Gamecocks expanded the lead to 16-12 before dwindling the lead due to errors. Kentucky took advantage with the score 17-15 in USC’s favor and rattled off six-straight points, capped by a Brown kill. USC managed just three more points before Brown registered set point and UK took the frame, 25-20.

Much like the third set in Columbia, the final frame was hotly contested. Thomasson started things off with a service ace, and the set went back-and-forth until UK had a 10-7 lead. USC managed a 5-0 run and gained a 12-10 lead. Edmond pulled the Wildcats back within one, but the Gamecocks responded with two kills of their own. UK went down four at 16-12 before two Brown kills helped Kentucky get back within one. No team managed to pull ahead more than one until match point. After USC went ahead 29-28, an Emily Franklin kill tied the set. A block from Franklin and Morgan allowed UK to take the lead at 30-29 and a bad set from South Carolina gave UK match point, 31-29.

.800 – Kaz Brown’s attacking clip, the highest attacking percentage for an individual since 2014