Rowdy is King at the Coliseum 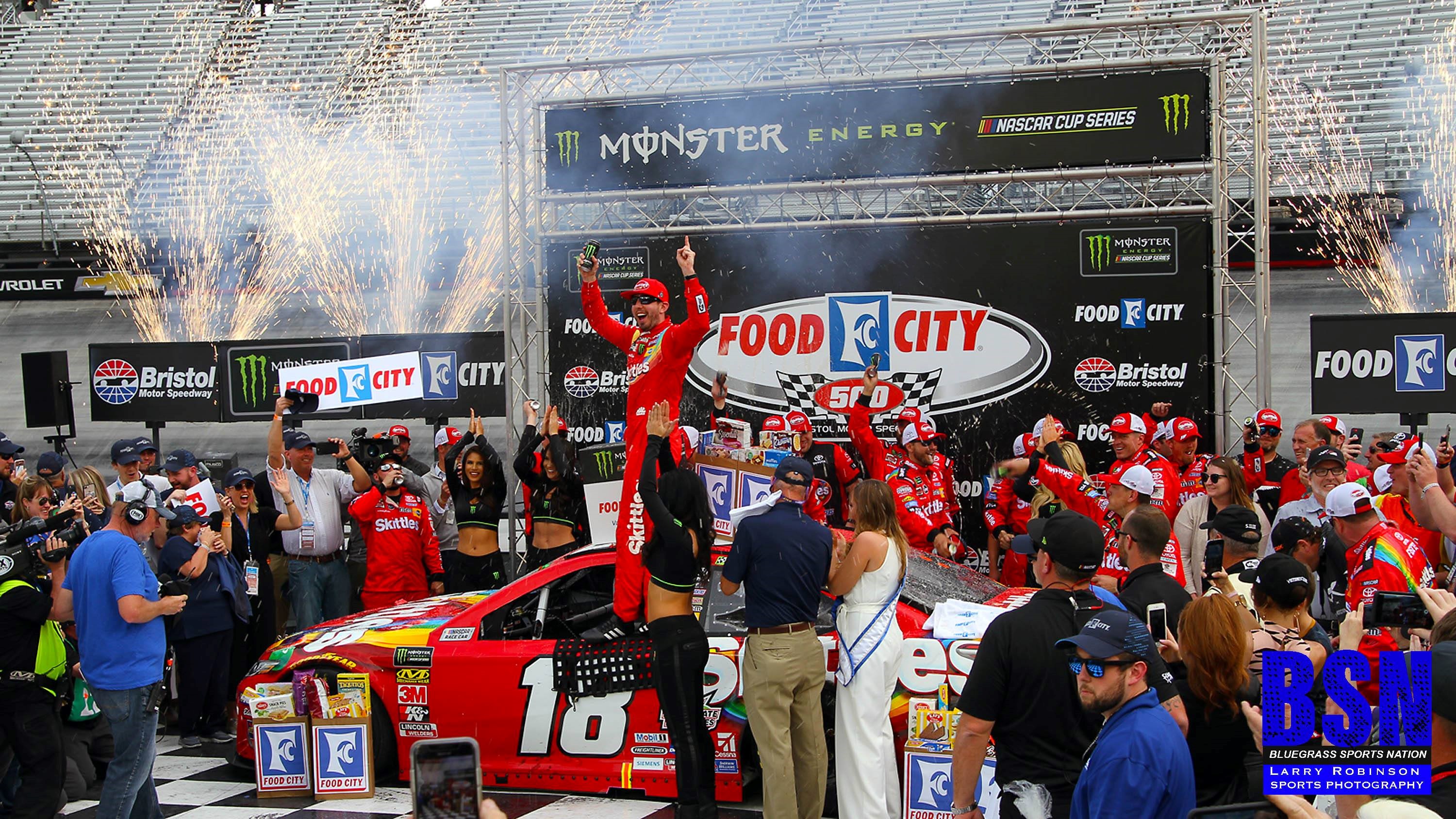 The Monster Energy NASCAR Cup Series 8th race of the season motivated to the Bristol Motor Speedway for the Food City 500 today and the Busch Brothers ruled!

Bristol Motor Speedway, located in the North East Corner of Tennessee, measures .533 half-mile asphalt oval and is paved in concrete.  The Speedway has been a NASCAR venue since 1961.  In 2012, the top groove was grounded down to a maximum of 28 degrees.  When cars line up for the start, the cars often stretch nearly half-way around the short track.  As result, Bristol is known for its paint swapping and include numerous accidents and caution flags.

To win at Thunder Valley, each driver must have a game plan, unfortunately Kevin Harvick- Driver of the No. 4 Ford was penalized for not passing pre-entry car inspection (3 times).  This penalty placed the No. 4 Mustang back in the pack, forfeiting his 13th place qualifying position.  Harvick wasn’t too Happy as he additionally had to obey a pass-through penalty that placed his Mustang laps down early in the event.  This was definitely not a plan in the Stuart-Hass playbook.

Young Gun and NASCAR’s Most Popular Driver/Pole Sitter – Chase Elliott pilot of the No. 9 Hendrick Chevrolet, brought the field to green but not for long.  As emotions were running high on the high banks, real estate ran out early, as Ryan Blaney, Driver of the No. 12 Mustang clipped No. 10 -Aric Almirola’s Mustang sending him into the fence and starting a domino pile up behind the accident, bringing out Caution # 1 on lap 2.  Other cars collected in the carnage included No. 17 Stenhouse Jr. and No. 18 Kyle Bush.  Most cars effected were able to repair their respectful damage and return except No. 10-Almirolo who pulled his car to the trailer for loading.

While leading through lap 44 in Stage 1, Chase Elliott was collected by Ryan Preece-Driver of the No. 47 Chevrolet, as he tried to overdrive Turn 4 and spun out in front of the leader, bringing out Caution #2.  Cosmetic repair for the No. 9-Elliott Mustang as he dropped to position 6 on the restart.  Denny Hamlin, Driver of the No. 11 Gibbs Toyota, decided not to pit on the previous caution and resumed the lead.  The lead was not lasting as Eric Jones, driver of the No. 20 Toyota, took over the No. 11 Toyota lead with fresh Goodyears.

Lap 59 of Stage 1 displayed a battle between Blaney and Jones as Blaney posted his Ford to the front to set the pace in Stage 1.  Clint Bowyer, driver of the No. 14 Ford, and Ford Companion No. 22 Joey Logano interchanged the lead as Stage 1 advanced.

A final Stage 1 caution, involved No. 15, Ross Chastain’s Chevy, using his chrome horn dumping the No. 8, Daniel Hemric, bringing out a 2 lap shoot out for stage 1.  Driver of the No. 13 Chevrolet, Ty Dillon, strategically out dueled point leader, No. 14 Clint Bowyer, for Stage 1 Win.

In stage 2, Logano was firmly in charge by checking off laps and any competitors in due site, to win Stage 2.

Kyle Busch overcoming an early accident, patiently worked his car through lap traffic and taking his first lead on lap 354 over Bowyer.  A Battle between Busch and Bowyer showcased Stage 2, as Drivers traded paint and the point. Gibbs Toyota teammate, Hamblin clocked off an astonishing 2-tire pit service and awarded to the point over teammate Busch.  Busch resumed the lead as Hamlin was penalized for pit infractions and suffered to serve a pit penalty.  Busch then dialed in the Gibbs Toyota and didn’t look back as he collected win No. 3 of the 2019 Monster Energy NASCAR Cup Series and 54th victory in 506 Monster Energy NASCAR Cup Series starts.

On a sad note,  NASCAR Cup Champion Darrell Waltrip announced the end of a 19 year broadcasting career during the Bristol Race Weekend festivities. Waltrip will end his broadcast career at the end of this year’s Fox broadcast races.