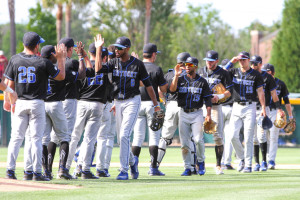 Wildcats get their sixth SEC series win in seven weekends, third on the road
COLUMBIA, S.C. – Kentucky broke a tie with three runs in the eighth inning and Logan Salow had a career-high 10 strikeouts  in relief as the No. 6 Wildcats defeated No. 21 South Carolina, 9-4, on a hot Saturday afternoon at Founders Park.

With the win, Kentucky won a series at South Carolina for the first time since 1999 and won its sixth SEC series in seven weekends this season, and third on the road. UK improves to 31-14, leading the Southeastern Conference Eastern Division with a 14-7 league mark and tying Western Division co-leaders Mississippi State and Auburn for the overall league lead.

Shortstop Riley Mahan got the game-winning rally going with a walk and a stolen base.  With two outs, third baseman Tyler Marshall delivered the go-ahead single to left field, plating Mahan. Centerfielder Marcus Carson singled and shortstop Connor Heady walked to load the bases before Right-fielder Tristan Pompey hit a hard grounder to second that took a high hop off the top of the second baseman’s glove that tallied Marshall and Carson. Mahan added a two-run homer in the ninth inning.

On the mound, reliever Logan Salow entered with one out in the fifth inning and the game tied at four.  He worked out of that jam and threw four more scoreless innings to get the win, his second of the season. He had a career-high 10 strikeouts in 4.2 innings, retiring the last 12 batters in a row, allowing one walk for the only baserunner against him. Meanwhile, the Wildcats piled up 13 hits, with three singles each from Marshall and left-fielder Zach Reks.

South Carolina got on the board in the second inning with a home run by designated hitter Ross Grosvenor. Kentucky got three runs in the third inning, capped by a two-run homer by first baseman Evan White.  The Wildcats added a run in the fourth but the Gamecocks bounced back to tie it in the fifth with three runs off UK starter Justin Lewis, with the big hit of the inning a two-run homer by catcher John Jones.

Kentucky takes the week off for final examinations before beginning an eight-game homestand Friday at 6:30 p.m. vs. Georgia.

Top 3rd – Leading off, Marcus Carson was hit by a pitch, was sacrificed to second by Connor Heady, and scored on a single by Tristan Pompey. Evan White followed with a two-run homer to left field. UK 3, SC 1.

Top 4th – Troy Squires’ hard-hit grounder took a tough hop off the first baseman’s glove and he hustled it into a double. He scored on a single by Tyler Marshall. UK 4, SC 1.

Bottom 5th – Madison Stokes led off with a double and John Jones followed with a two-run homer to right.  L.T. Tolbert singled to right and Carlos Cortes chased him home with a double into the right field corner. UK 4, SC 4.

Top 8th – Riley Mahan walked and stole second.  With two out, Marshall singled to left, scoring Mahan. Carson singled and Connor Heady walked to load the bases. Pompey hit a grounder to second that took a high hop off the top of the second baseman’s glove, a single that scored Marshall and Carson. UK 7, SC 4.

o   Salow did not allow a hit, retiring 14 of the 15 batters he faced. A walk was the lone baserunner.

o   White has six multi-RBI games this season and 21 in his career.

o   Reks now has 107 career hits, moving him into a tie for 45th place on the Cats’ all-time hits list, where he joins current graduate assistant Micheal Thomas (2011-14).

o   Carson now ranks ninth on the all-time UK single-season list, moving past him current teammate Storm Wilson (2014) and into a tie with Mike Brown (2007).

Kentucky returns home for an eight-game homestand that begins with Georgia next Friday at 6:30 p.m at The Cliff. Fans can listen on the UK Sports Network via UKathletics.com and iHeart Radio, as well as on 630 AM WLAP, and watch on SECN+.