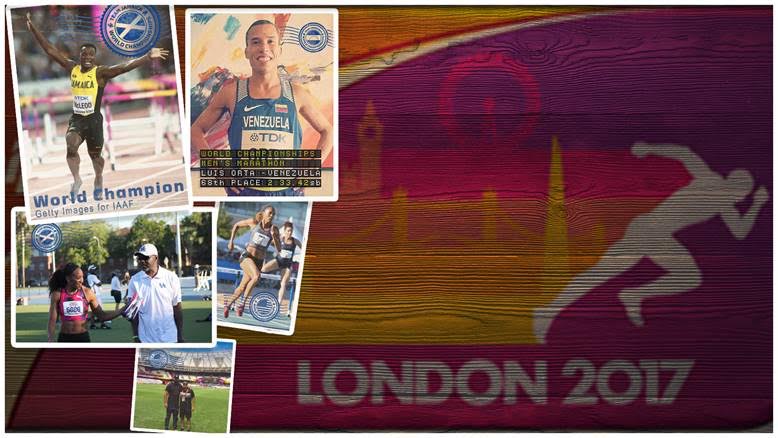 LONDON – Omar McLeod, who serves as a volunteer assistant coach on the Kentucky track and field staff and trains under UK head coach Edrick Floréal’s tutelage having competed collegiately for Arkansas, became world champion in the men’s 110-meter hurdles on Monday.

The Jamaican used his trademark lightning fast start to clear hurdle No. 1 wit the lead, and he never trailed from there. Defending World Champion Sergey Shubenkov narrowed the margin over the second half of the race, but McLeod – the only man in history to break both 13 seconds in the high hurdles and 10 seconds in the 100m dash – pulled away from the 10th hurdle to the finish line.

“I had to come out here and do it for Jamaica,” McLeod said. “I particularly wanted to come out here and dedicate this win to Usain Bolt’s retirement … I’m one of his biggest fans. He’s a huge role model.
“There was a lot of pressure coming in, but I channeled it positively. It’s totally different to last year where we had Usain and Elaine (Thompson) winning, which I used to propel me. I didn’t have that this time so I really wanted to come out and shine my own light.”

Carter continued to show the form that has seen her look as good this summer as she has at any point in her career in winning her preliminary heat comfortably with the third fastest time overall: 54.99.

Nugent placed fifth in the first heat, but ended up with the fastest of the non-automatic qualifying times: 56.16.

On Friday Andrew Evans had a best mark of 201’1″/61.32m in discus qualifying. He placed 20th, eight spots from the final advancing mark.

Kayelle Clarke is entered in the 200m heats for Tuesday. Clarke is also in T&T’s 4x100m relay pool, and that event will be contested over the final weekend.

McLeod could feature in the 4x100m pool for Jamaica over the weekend.

UK alumna Hiruni Wijayaratne was unable to finish in her World Championships debut in the women’s marathon representing Sri Lanka. Wijayaratne won the Eugene Marathon in Oregon earlier this year.

UK Class of 2015 alumna Kendra Harrison, who like her training partner McLeod enters these World Championships as favorite, will begin her program on Friday in the 100m hurdles heats.