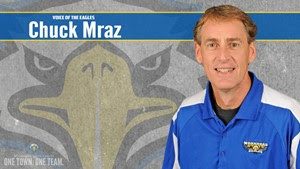 MOREHEAD, Ky. — Chuck Mraz, who has broadcasted Morehead State athletic events for nearly 30 years, has been named the 2016-17 recipient of the Ohio Valley Conference Media Award.

The awards were established in 2010 as a way to recognize the media members who provide publicity for the Conference, its member institutions and intercollegiate athletics, perform their jobs in a fair, consistent and accurate manner, provide all-around coverage for a variety of sports and demonstrate the ability to go above and beyond their normal beat or job description.

“The OVC has a lot of great stories to tell and we are fortunate to have an outstanding group of media covering our schools, which was evident in the great candidates we had for the awards again this year,” said Kyle Schwartz, OVC assistant commissioner for strategic communications. “It is great to have an award that recognizes media members who have made significant contributions in covering the OVC and its member institutions.”

In addition to his duties of being the play-by-play voice for the Morehead State football and men’s basketball teams, Mraz is also the news director at Morehead State Public Radio (MSPR), a 50,000-watt station serving Eastern Kentucky, Southern Ohio and Western West Virginia.

“I am very grateful to win this award,” he said. “When you look at the list of past winners there are many great broadcasters and journalists.”

Mraz enters his 29th season as MSU’s play-by-play announcer, beginning his tenure in 1986-87. He took a hiatus from the role for three years in the mid-1990s, but during that time off from announcing, hosted the OVC’s weekly radio report that was syndicated around the league’s markets. Mraz has broadcast more than 1,000 Eagle athletic events, including calling Demonte Harper’s game-winning three-point against Louisville in the 2011 NCAA Tournament.

“The win over Louisville is without a doubt the highlight of my career,” he said. “I remember I was so excited to do that game, I was literally shaking, and I had so much adrenaline surging through me that day.”

In his role with MSPR, he has mentored hundreds of students who have gone on to notable careers in broadcasting. In May 2015, he received the East Kentucky Leadership Conference Award for Media and Technology, his third Associated Press play-by-play award, a “Best in State” honor for long newscast and a third-place prize for sports reporting. Overall he has won more than 30 Kentucky Associated Press awards for his work in broadcasting and sports reporting.