UK loss drops them out of SEC Tournament 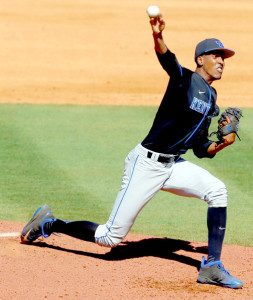 HOOVER, Ala. – TJ Hopkins hit a pinch hit, three-run home run in the seventh inning to give South Carolina a 3-1 victory over No. 8 Kentucky, eliminating the Wildcats from the Southeastern Conference Tournament on Friday.

The Wildcats (39-20) return to Lexington after a 10-day road trip through Florida and Alabama and will await the NCAA Tournament draw on Monday. UK is expected to host a regional as one of the nation’s top 16 seeds and is still in the discussion for one of the eight national seeds that would maintain home field through the Super Regionals.

Sophomore right-hander Justin Lewis took a no-hitter into the sixth inning and did not allow a run in his 5.1 innings of work but the UK offense couldn’t find the timely hits it needed to stave off the Gamecocks. The Cats got a run in the first inning but ultimately left nine runners on base and went 2-for-16 with runners on base, including 0-for-9 with them in scoring position. They also had a pair of runners picked off.

South Carolina managed just two hits on the day but used a walk and an error to put two men on in the seventh for Hopkins, who pinch hit for catcher Hunter Taylor. The sophomore outfielder took a pitch from senior lefty Logan Salow and pulled it over the left-field wall for his fifth home run of the season.

o   Lewis finished 5.1 innings, giving up just one hit, walking only one and striking out six.

o   Lewis had three 1-2-3 innings and retired eight in a row at one point.

o   It was Lewis’ second scoreless outing of the season, joining the 7.0 innings he tossed vs. Delaware in his second start of the season on Feb. 26.

o   He extended his reached base safely streak to 30 straight games.

o   Cottam is 11-for-22 in the last six games, including five extra-base hits.

o   Heady has reached base in seven of 10 plate appearances during the SEC Tournament, including four hits and three walks.

Kentucky will return home and await the NCAA Tournament draw. The Cats are expected to host a regional next weekend at Cliff Hagan Stadium.