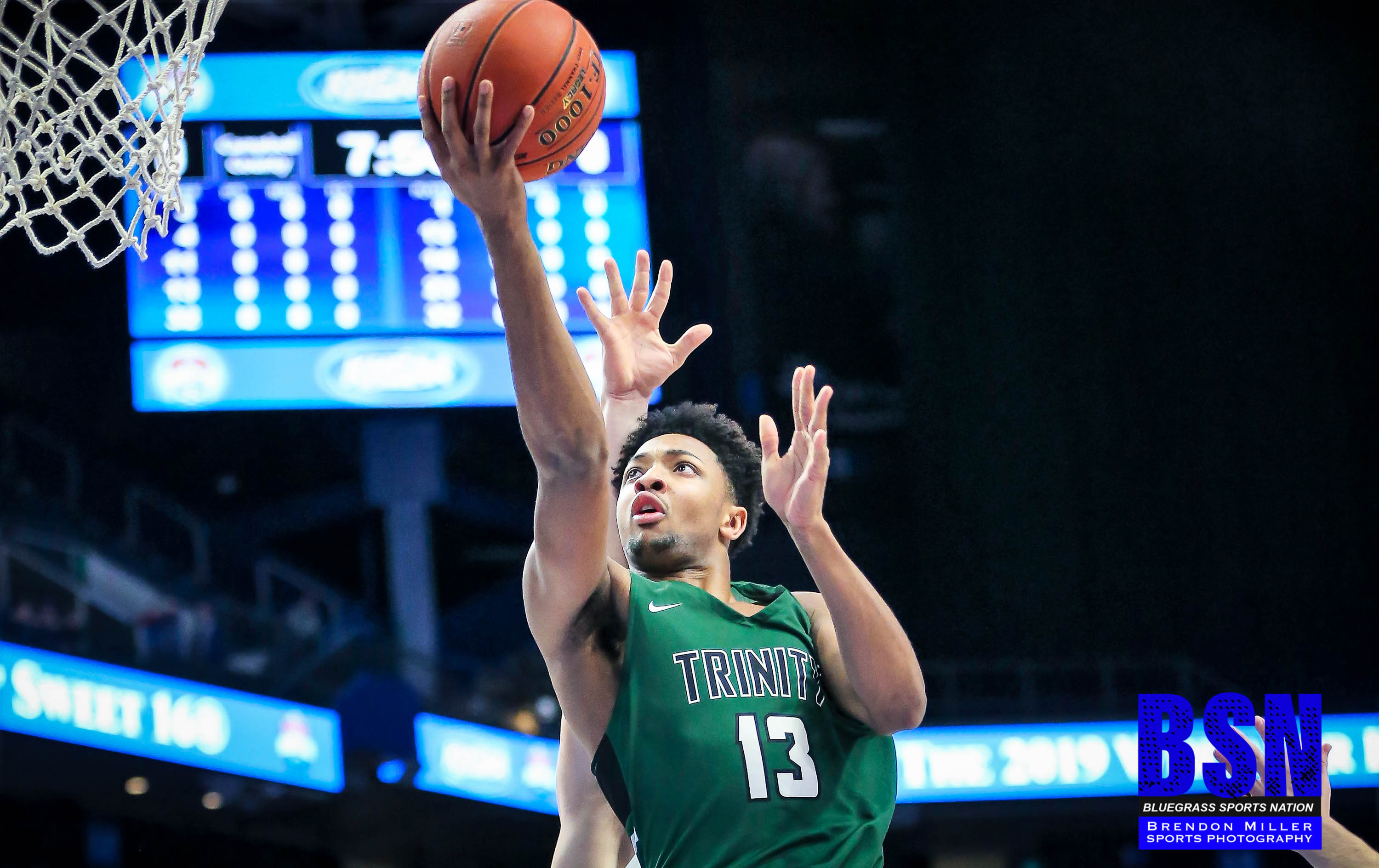 Scott County opened the game with a seven to zero run.  Diablo Stewart scored the first four points of the game and Bryce Long connected with a three- point basket.  Trinity responded with five unanswered points as the Shamrocks and David Johnson got the team on the scoreboard.  The two teams traded baskets over the next few possessions and the game was played at a fast pace with both teams running in transition and quickly settling into their offenses.  Trinity’s Stan Turnier connected on two free throws with the shot clock expiring at the end of the first Quarter.  Scott County led Trinity 12-10 at the end of the first quarter.

Scott County’s Michael Moreno opened the scoring in the second quarter with a jump shot inside the arc.  Trinity’s Turnier responded with a basket on the other end, and the Scott County lead was cut to two points.  The teams trade baskets the next couple of possessions, and Trinity tied the game at 16 with a Jamil Hardaway Jump shot.  Diablo Stewart of Scott County made a three- point basket, bringing the Scott County Faithfull to their feet.  With only five seconds remaining in the half, Scott County led Trinity 22-19.  Trinity scored three points at the buzzer with Johnson connected with a three- point basket, Johnson’s Basket tied the game at twenty- two entering the half.

The third quarter saw two huge momentum swings with each team benefitting from the runs.  The Shamrocks opened the second half with a seven to zero run.  David Johnson and Jamal Hardaway led the Shamrocks with Johnson contributing five points and Hardaway adding two points during the run.  The Shamrocks played Solid defense, and limited Scott County Offense to one shot.  The basket was Trinity’s last Basket of the quarter.  Scott County the State’s # 1 Ranked team entering the Tournament responded with an eleven to zero run, taking a 31-29 lead with 1:46 remaining in the quarter.  Stewart and Moreno were phenomenal during the stretch as the team relied on the two players to carry the scoring load.  Lorenzo Williams added to the lead with a transition layup.  At the end of third Quarter Scott County led 33-29.

Trinity opened the fourth quarter playing their best basketball of the game and quickly developed a comfortable lead.  David Johnson put the Shamrocks on his back and carried the scoring load while being a force on the boards.  Trinity opened the quarter with a fifteen to two run, the Shamrocks led 46-35 with one minute and twenty- two seconds remaining in the game.  Scott County went cold from the field and was limited to one possession, with the Shamrocks grabbing several rebounds and pushing the ball into the front court.  Scott County sensing the game was slipping away was forced to foul Trinity putting the Shamrocks on the free throw line.  Trinity made several free throws and the fans began to celebrate leading by ten points with under a minute remaining in the game.  Scott County’s Glenn Covington scored on a three- point basket, cutting the lead to seven points with forty- eight seconds remained.    David Johnson and Stan Turnier made three free throws in the closing seconds and Trinity goes on to capture the State Championship defeating Scott County 50- 40.