A Third-Generation Colonel Student-Athlete, Thornsberry is Writing His Own Story at EKU 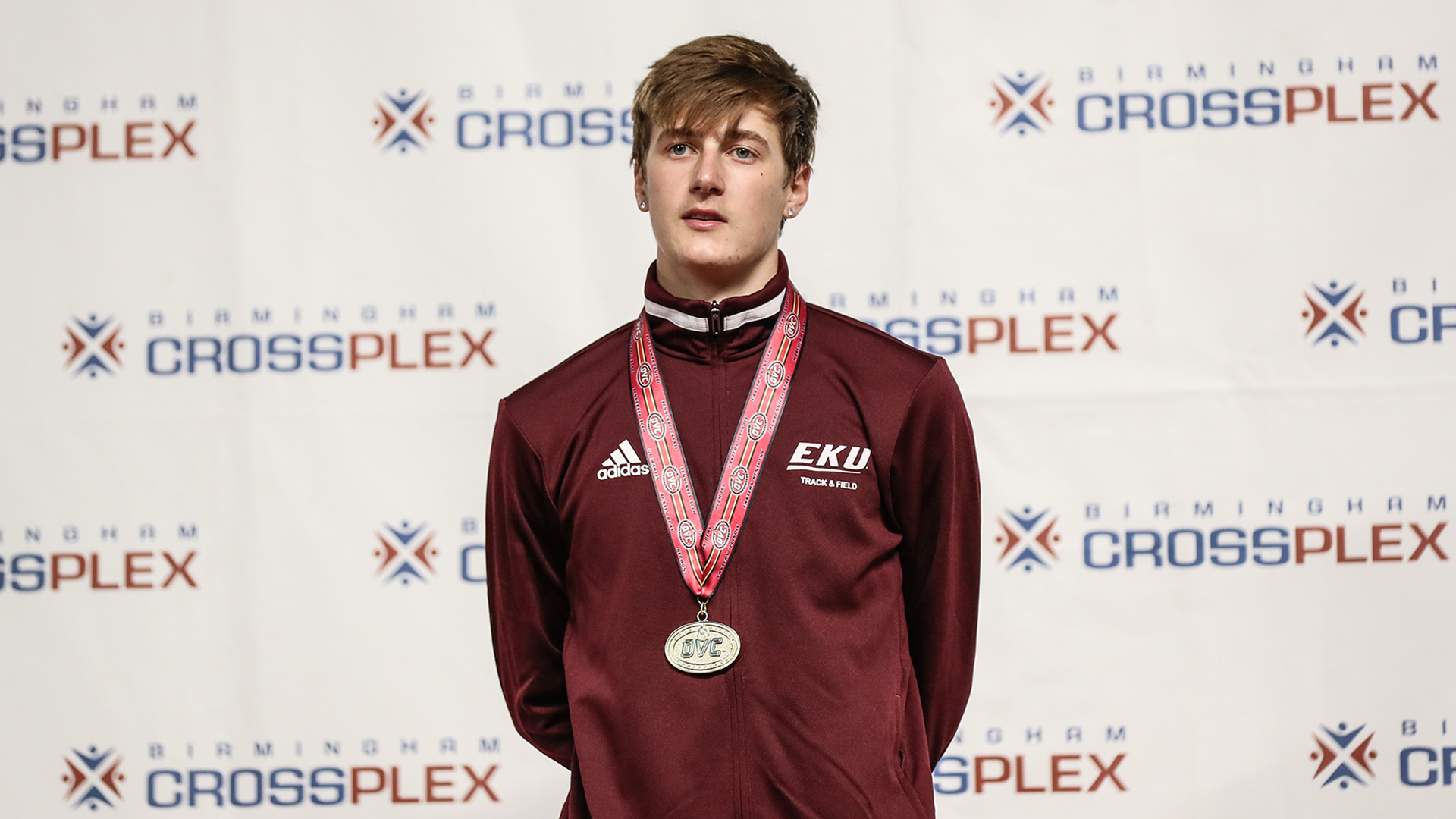 “Even as a kid … I couldn’t handle losing at Monopoly.”

His competitive nature, however, rarely allowed him to fail.

Thornsberry was Notre Dame Academy’s fourth-grade Geography Bee champion, and he was the finest pickleball player in the entire neighborhood.

So, when he started running cross country late in Elementary school, and he kept finishing second to the same kid … this was a problem.

At the time, Thornsberry played football and ran cross country in the fall.

This proved to be a good decision.

Directly next to Holy Cross sits the home in which Thornsberry has lived his entire life.

Fifty meters from his bedroom window is the school’s track.

Thornsberry was born to be a Holy Cross Cougar.

With their sizeable student bodies and robust resources, Trinity and St. X are athletic powerhouses – true titans of the city and commonwealth … especially in the realm of distance running.

The two schools have combined to win 43 KHSAA cross country championships, including 10 of the last 11 class-AAA titles.

Meanwhile, when Thornsberry arrived as a bright-eyed freshman, Holy Cross had never won a KHSAA cross country crown … even at the class-A level.

“We didn’t have a locker room or a rubber track until my junior year,” he said. “And we had to fundraise to get our uniforms.”

“We didn’t have some of those advantages. So we had to work that much harder to make up for it.”

Thornsberry and his teammates – many of them neighbors since childhood – pounded the sidewalks of Shively. They embraced an underdog mentality, determined to create their own legacy at Holy Cross.

And they did just that.

In 2017, Holy Cross won its first-ever KHSAA boys cross country title. Thornsberry, then a junior, led the way, claiming the individual state title with a 5K time of 16:09.3.

The Cougars defended their crown in 2018. Thornsberry, again, was the individual state champion, this time covering the 5K course at the Kentucky Horse Park in a time of 15:46.39.

That spring, in his final act as a Cougar, Thornsberry pulled off the rare trifecta: winning the 800 meters, 1,600 meters and 3,200 meters at the KHSAA class-A state track meet.

Ever the competitor … Thornsberry even ran in the meet’s final race, the 4×400 meter relay, just to secure Holy Cross’ second-ever KHSAA boys track and field championship.

Thornsberry sharpened his competitive edge at an unlikely place – the basketball court.

It is (hopefully) a safe assumption that most Division-I caliber distance runners are not also high school basketball standouts.

In the winter … that cold, dead era between cross country and track … Thornsberry hooped.

A wiry and fiery shooting guard/small forward, “I was the guy other teams didn’t like,” he said, somewhat proudly.

His competitive flair “led to some heated moments on the court,” but Thornsberry never backed down.

As a senior, he was voted first team all-district after averaging 10.2 points and nearly 4.0 rebounds-per-game.

Because he played basketball, and did not dedicate to distance training year-round, it is possible Thornsberry was somewhat overlooked in the college recruiting process.

But he would not have done it any other way.

Like a lot of Kentuckians, basketball was Thornsberry’s first love. He believes it made him a stronger, more well-rounded and less injury-prone athlete.

It was also a welcome break from a sport that can be a notorious grind on the body and brain.

“By the end of high school, I hadn’t burned out physically or mentally,” Thornsberry said. “And I hadn’t tapped into my full potential.”

This was good news for Eastern Kentucky University.

When Thornsberry committed to run at EKU, he became the third member of his family to carry the title of Colonel student-athlete.

His maternal grandmother, Carmel Hines, played field hockey in the late 60s and early 70s. His mom, Carolyn, was on the dance team in the 90s.

Wearing maroon and white was a full-fledged family tradition!

Eastern was also a perfect fit for Thornsberry because it made him an underdog again.

“As soon as I walked in the door, I got my butt kicked,” he said. “Because everyone here is so good.”

“I was not a big-time recruit,” he added. “I was not a Foot Locker All-American coming out of high school. I had everything to prove and nothing to lose.”

After building himself into a star at Holy Cross, it was time for Thornsberry to bear down and do what he did best: compete.

Cross county – as it is for many Division-I true freshmen – was a rude awakening for Thornsberry.

But, in the midst of such a challenge, Thornsberry loved his new surroundings. He loved being exposed to the big stages and the big meets. He loved training every day with top-tier athletes. And he loved getting to know teammates from all over the map.

“Guys come from all over the world to be here, and be the best runners they can, so you know they’re dedicated,” Thornsberry said. “All the cultures on this team blend so well.”

By the time track season arrived, Thornsberry was gaining confidence. He was comfortable with the shorter, faster, more intense workouts. And he was learning the art of racing.

Whereas, in high school, he led most races from the gun, Thornsberry had to learn to race tactically in college. Negative splits. Making the right move at the right time. Saving that extra gear for the end.

He announced his arrival at the OVC Indoor Championships in February.

Thornsberry entered the meet ranked No. 5 in the conference in the mile. He was far from the favorite. The ESPN+ commentators did not mention him as a runner to watch in the race.

Around the midway point, he sat in fifth. That is when he and two teammates – junior Zak Kirk and freshman Alex Leshan – made a move.

They pulled away from the pack. At the bell, Thornsberry was in second, behind Leshan. He then unleashed a decisive kick that saw him win gold.

He was the first EKU true freshman to win the OVC mile crown since Soufiane Bouchikhi in 2010.

But for Thornsberry, the highlight of the race was sweeping the podium with his teammates, Leshan and Kirk.

“It always makes it better when you get to celebrate with your teammates.”

Thornsberry’s outdoor track season was ended by the COVID-19 outbreak; however, he is putting his newfound free time to good use.

He is focusing on academics – Thornsberry is a biomedical sciences major who plans to attend medical school after graduating from EKU.

He is also learning accountability, as most student-athletes are during this time. He has to motivate himself, and train by himself, to prepare for the lofty goals he has set for next season.

“I hope to be a big contributor on an EKU team that we hope will be one of the best in school history.”