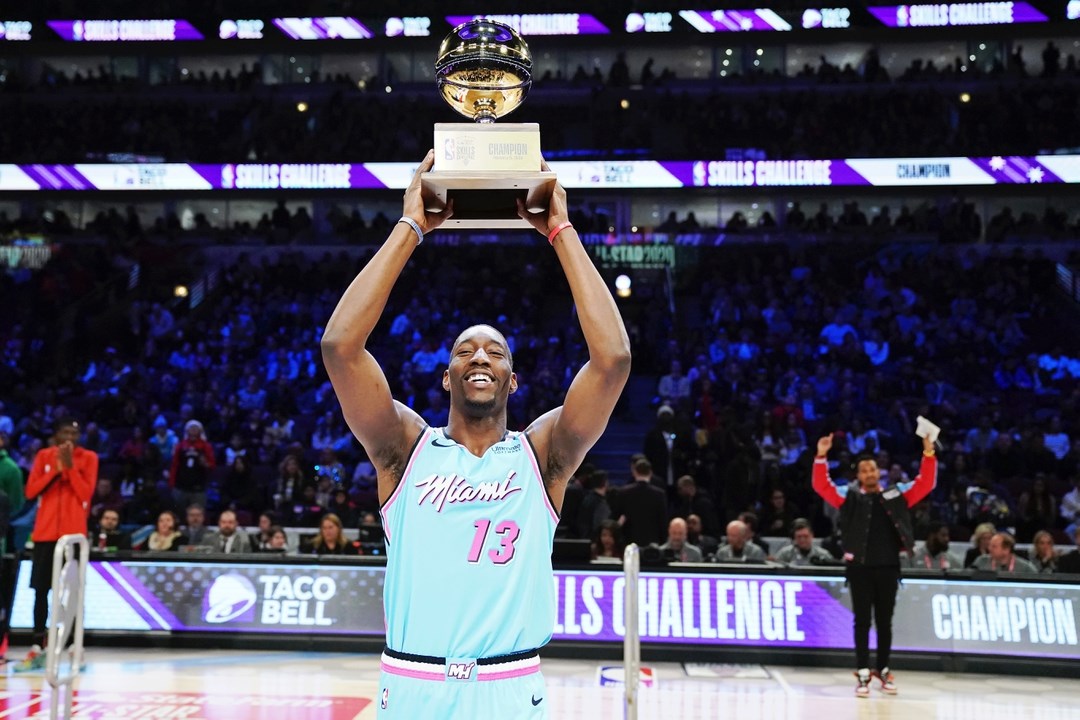 CHICAGO – With six former Kentucky men’s basketball players at NBA All-Star weekend, it shouldn’t come as a major surprise that the Wildcats are among the headliners in Chicago.

But when a 6-foot-9, 255-pound forward wins the NBA Skills Challenge, that raises a few eyebrows.

Those measurements belong to former UK star Bam Adebayo, who dominated all three rounds of the NBA Skills Challenge on Saturday night to beat a star-studded field. He beat another big man, Indiana’s Domantas Sabonis, in the championship round to underscore what’s already been a breakthrough All-Star season.

Adebayo – who will play in the All-Star Game on Sunday night for the first time in his career – became the second Wildcat to win the NBA Skills Challenge. Karl-Anthony Towns, who starred at Kentucky in 2014-15 and now plays with the Minnesota Timberwolves, won it in 2016.

A member of the 2016-17 UK team, Adebayo dedicated the victory to his mother, Marilyn Blount.

Not long after, Devin Booker nearly made it 2-for-2 for the Kentucky Wildcats at the NBA All-Star Saturday Night in the 3-Point Contest.

Booker, who will make his long overdue debut in the NBA All-Star Game on Sunday night, nearly became a two-time champion. The 2014-15 Southeastern Conference Sixth Man of the Year scored 27 in the first round and 26 in the championship round but was edged by Buddy Hield on the final shot by a single point.

It’s already been a sensational start for the Wildcats at All-Star weekend in Chicago. Shai Gilgeous-Alexander, with the Oklahoma City Thunder, scored 16 points in Friday night’s Rising Stars Challenge. PJ Washington, with the Charlotte Hornets, recorded eights points and five rebounds. The Miami Heat’s Tyler Herro was also selected for the game but sat out due to injury.

Adebayo, Booker and Anthony Davis will play in Sunday night’s main event, the NBA All-Star Game. Kentucky’s three former players are more than any other school.

That game will tip off at 8 p.m. ET on TNT and ESPN Radio.

Bam Adebayo
Adebayo, who was a part of the 2017 Elite Eight and Southeastern Conference championship team, has transitioned in year three from a talented young big man with potential to one of the game’s best forwards. With a menacing combination of size and athleticism, Adebayo has formed a strong core in Miami that has shocked the league with a 35-19 start and a fourth-place standing in the East.

The 6-9 forward is averaging a double-double for the Heat with 15.8 points and 10.4 rebounds per game, the latter a team high. Accentuating his versatility, Adebayo is averaging 4.9 assists, 1.2 steals and 1.2 blocks per game. He recorded his first career triple-double in December and already has three at this point. He’s shooting 57.9% from the floor.

In his lone season at Kentucky, Adebayo averaged 13.0 points, 8.0 rebounds and 1.5 blocks with eight double-doubles. He tabbed to the All-SEC Second Team by both the media and the league’s coaches. He was also an All-SEC Freshman Team selection and a member of the SEC All-Tournament team after helping lead UK to the crown. He registered eight double-doubles with the Wildcats before being selected 14th overall by the Heat in 2017.

Devin Booker
Booker, how in his fifth season in the NBA after going No. 13 overall in the 2015 NBA Draft, established himself as one of the game’s best scorers seasons ago. But with Damian Lillard pulling out of this weekend’s All-Star Game due to an injury, Booker finally got the much overdo nod to compete in the game. His numbers certainly warrant it.

Already the fifth-youngest player in league history to score 5,000 career points, Booker is putting up his most impressive numbers yet. He’s averaging 26.4 points, 6.3 assists and 4.2 rebounds for the much-improved Phoenix Suns while shooting a career-best 49.6% from the field to go along with 35.8% 3-point shooting.

Believe it or not, Booker never started a single game at Kentucky. As a member of the historic 38-1 team in 2014-15, Booker was Kentucky’s spark off the bench. He averaged 10.0 points and sunk 58 3-pointers en route to SEC Sixth Man of the Year and All-SEC Second Team honors.

Anthony Davis
Davis is in his eighth season in the NBA and first for the Los Angeles Lakers. In 2017, he won MVP honors at the All-Star Game on what was then his home court in New Orleans. Davis scored an All-Star Game record 52 points in addition to contributing 10 rebounds. He broke Wilt Chamberlain’s previous scoring record of 42 points set in 1962. He and the Lakers are off to a terrific start to the season as the Lakers are currently in first place in the West with a 41-12 overall record.

The 6-foot-11 forward ranks third in blocks (2.4 blocks per game), ninth in scoring (26.6), 14th in steals (1.6), 15th in total double-doubles (23) and 19th in rebounding (9.2). His player efficiency rating, a strong indicator of a player’s overall contributions and value, is at 28.40, which ranks fourth in the league. Midway through the season, he’s being discussed nationally as an MVP candidate.

Shai Gilgeous-Alexander
After earning All-NBA Rookie Team honors a season ago, Gilgeous-Alexander is off to another stellar campaign. He’s averaging 19.5 points, 6.1 rebounds, 3.1 assists and 1.2 steals per game for the surprise Oklahoma City Thunder who are 32-22 and in seventh in the Western Conference. This season, Gilgeous-Alexander became the youngest player in NBA history to record a 20-rebound triple-double. He had 20 points, 20 boards and 10 assists against the Timberwolves on Jan. 13.

Following one season with the Wildcats in 2017-18, Gilgeous-Alexander was selected 11th overall by the Charlotte Hornets before being traded to the Los Angeles Clippers where he spent his first season in the NBA. He was an All-SEC Second Team selection and was the MVP of the SEC Tournament during his freshman campaign with the Cats. He averaged 14.4 points, 5.1 assists and 4.1 rebounds per game. He scored in double-figures in 27 games and ranked third in program history for the most assists by a freshman (189).

Tyler Herro
Herro is off to a terrific start alongside Adebayo in Miami. He’s averaging 13.1 points, 4.0 rebounds and 2.0 assists per game in a reserve role for the 35-19 Heat who currently own the No. 4 seed in the Eastern Conference. Herro leads all rookies in 3-pointers with 99 on the season and an average of 2.2 per game. He’s scored in double-digits 29 times, including a 27-point performance on Dec. 10 when he scored the team’s final 11 points in overtime.

He enjoyed a prolific freshman campaign for the Wildcats in 2018-19 where he was tabbed to the NCAA Tournament All-Midwest Region Team and was the SEC’s Newcomer of the Year by the Associated Press. He was an All-SEC Second Team pick and a Basketball Times All-Freshman First Team selection. He averaged 14.0 points, 4.5 rebounds and 2.5 assists per game for the Wildcats who moved on to the Elite Eight of the NCAA Tournament after he knocked down a game-winning 3-pointer against Houston in the Sweet 16. Herro was drafted 13th overall by the Heat in the 2019 NBA Draft.

PJ Washington
Washington burst onto the NBA scene with a memorable opening night where he scored a rookie-record seven 3-pointers in his debut. For the season, he’s averaging 11.7 points, 5.5 rebounds and 2.0 assists per game for the Charlotte Hornets. He shooting 46.3% from the field and 37.6% from 3-point range. He’s topped double-figures in 28 games and has four double-doubles on the season.

After spending two seasons with the Wildcats, Washington was drafted No. 12 overall by the Hornets in 2019. Washington was a consensus All-American during his sophomore campaign in the Blue and White. He was also a first team All-SEC selection and was one of five finalists for the Naismith Memorial Hall of Fame’s Karl Malone Award honoring the nation’s top power forward. He led the Wildcats in scoring (15.2), rebounding (7.5) and double-doubles (13) during his sophomore season. For his career, Washington averaged 12.9 points, 6.6 rebounds and 1.7 assists per game. After making just five 3-pointers his freshman season, Washington drained 33 during his second season.

Calipari’s players are not only reaching the next level, they are succeeding when they do. His players have garnered 23 All-Star selections with the latest picks. Derrick Rose (from Memphis) was named league MVP in 2011. Five of his players have been tabbed All-NBA (Rose, Wall, Davis, DeMarcus Cousins and Towns), three have been named NBA Rookie of the Year (Rose, Tyreke Evans and Towns), and 12 players from Calipari’s first nine teams at Kentucky have made the NBA All-Rookie teams.