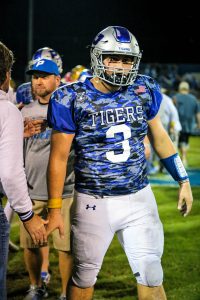 Tyrese Allen, Paintsville’s 6’4″ 290 pound running back was a load to bring down. (Photo by Brendon Miller)

Not much changed this week with the top teams in the BSN coverage area. As teams tune up for their runs at a State Tournament, some have put themselves in tougher positions than others. As expected, the teams that advanced deep in the playoffs last season are once again at the top of their game and ready for the battle that is playoff football.

In Class 3A action in a battle for District supremacy, Breathitt (3-6) traveled to Powell County (4-4) with hopes that their season turnaround would continue after 3 straight District wins. It simply was not to be as Powell exploded for a 44-6 halftime lead in route to a 44-20 win to go 4-0 in District play.
In other action, Belfrey (7-1) continued to roll towards the post season with a 48-6 win against Lawrence County. Corbin (7-1) traveled to Bell County (5-3) in a game that was expected to be a old fashioned slobber knocker, it was not. Corbin rolled to a 42-8 road win. Danville made easy work of (2-6) Middlesboro 53-0.
Estill County (2-6) got their 2nd win of the season over the free falling Magoffin County (2-7) who lost their 5th straight game by the score of 56-32.

In BSN’s Game of the Week, Class 1A #1 Painstville defeated Class 1A #3 Hazard 12-7. The game came down to 2 yards on a goal line stand. Paintsville stopped Hazard for the win. You can check out the complete coverage for the game by CLICKING HERE