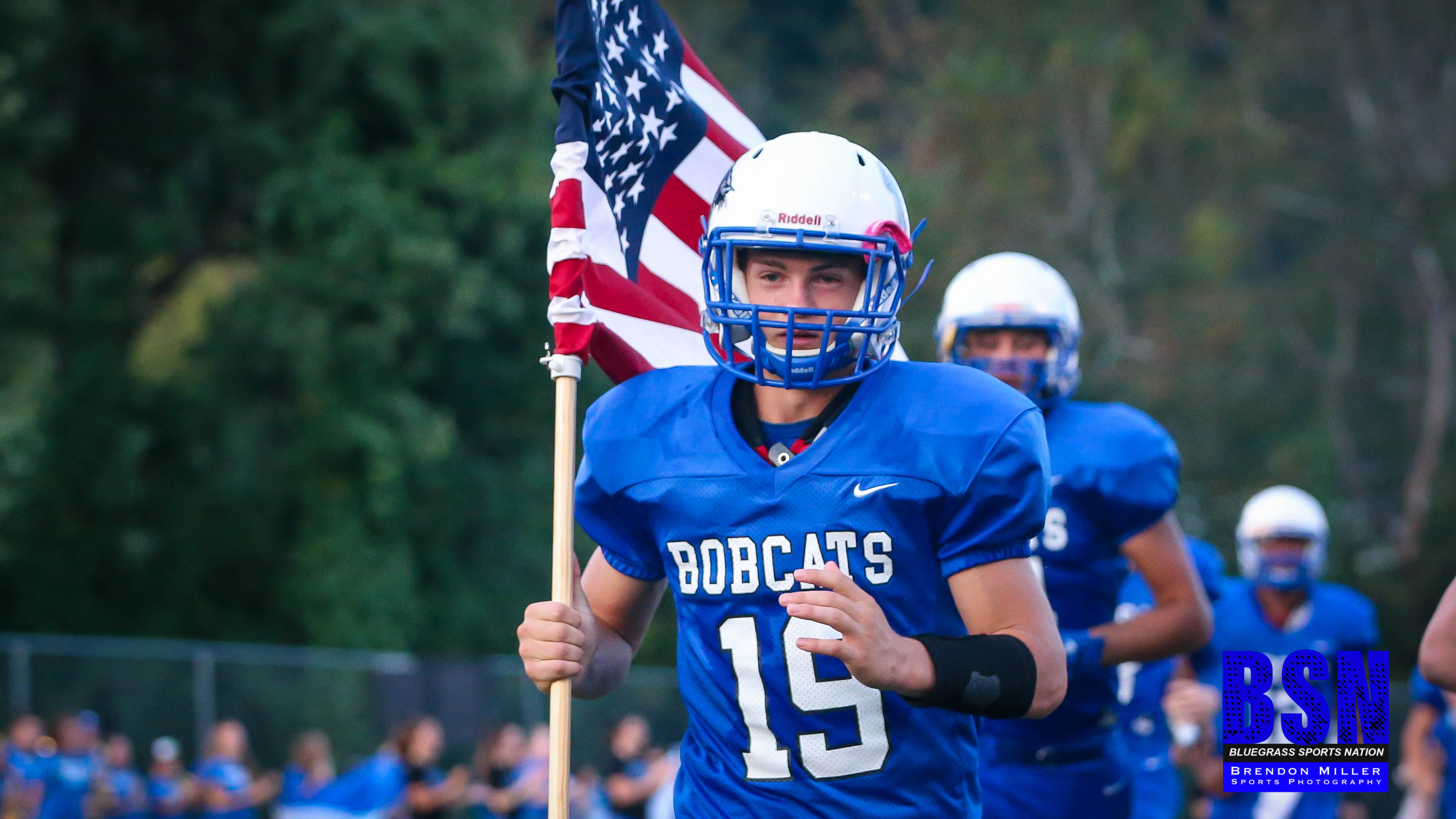 The Breathitt County Bobcats entered week four of the season with no blimishes and a 3-0 record. Breathitt had not trailed for even one second coming in to Friday night’s game with Estill County. In fact, Breathitt hasn’t had to deal with adversity. That would all change when Estill County rolled into the RiverBank on First Responder Night.

Breathitt won the toss and, as expected, elected to receive the ball. It didn’t take the Bobcats long to get on the scoreboard as they drove 65 yards on two plays as Braxton O’Hara housed it from 59 yards. Lane Weddle added the PAT and the Bobcats led 7-0. Breathitt’s stiffling defense continued to show their dominance forcing Estill County to punt on their first possession.

In what has been a true strength for the Bobcats, it would be their special teams who created the first serving of adversity. Lane Weddle attempted to field the Estill punt that was clearly interfered with, but no flag was thrown, and Weddle muffed the punt and it was recovered by the Engineers.

Estill capitalized by methodically running the ball through the heart of the Breathitt defense. Led by center Dylan Officer, Estill County evened the score at 7 on a Justin Stamper 5 yard run with 4:47 seconds remaining in the first period.

After kicking the ball out of bounds on the ensuing kickoff (which was a smart decision by Estill County) the Bobcats offense took the field starting on their own 35 yard line.

Estill’s defense served Breathitt their second helping of adversity of the night on the very first play of the Bobcats drive. The ball slipped from O’Hara grip and Estill senior defensive end Wyatt Francisco scooped and scored from 30 yards. For the first time in 2019, the Bobcats trailed 13-7.

On Breathitt’s 3rd offensive possession of the game, O’Hara and company talked with their pads telling the Bobcat faithful to R…..E……L…..A…..X  RELAX!!! Breathitt drove the ball deep into Engineer territory; ending the first period on Estill 2 yard line. To open the second quarter Breathitt turned to Charles Collins on 4th and 1 taking the handoff and plunged into the endzone. The two point conversion by O’Hara put Breathitt back on top for the night 15-13.

Breathitt’s defense made adjustments and smoothered Estill forcing them to turn the ball over. O’Hara immediately went to thee air and connected with Brandyn Slaughter on a 47 yard strike setting the Bobcats up inside the Engineers 10-yard line. Two plays later, senior tailback Dalton Manns steamed into the endzone from 4-yards out making the score 21-13 in favor of the Bobcats.

Estill was unable to get anything going on the ground so they turned to the air. Co-defensive player of the game Brandyn Slaughter picked the Engineers off twice. Both turnovers resulted in points for the Bobcats, and his first set the Bobcats up with the momentum.

Breathitt immediately gave the ball to Collins who went around right end untouched for 45 yards and another Bobcat TD. Breathitt led 27-13.

The third serving of adversity came from Mother Nature who placed the game under a lightening delay. Breathitt had taken Estill County’s best punch and got back up. Up 27-13, the Lightening Delay stopped the bleeding for the Engineers and gave Coach Marcum a chance to make adjustments.

Breathitt again went to Collins and he proceeded to go 71 yards for another TD prior to the half. The score made the halftime score 35-13.

Breathitt would add two more scores in the second half by Weddle and O’Hara making the final score 50-13 loss.

Although Breathitt gave up 13 points, the defense was only responsible for 7 of them; proving once again that the Bobcat Defense is up for the challenge.

The 50 points scored by the Bobcats marks the second straight week that they have scored 50 or more. Breathitt is averaging 46.8 points per game, while only giving up 8.8 points a game. The Bobcats have outscored their opponents 187- 35.

Offensively, the Bobcats scored seven touchdowns on the ground by four separate players. Chalres Collins led the way with 173 yards and three touchdowns on 13 carries. Braxton O’Hara, Lane Weddle, and Dalton Manns combined for 180 yards and 4 touchdowns on 14 carries. O’Hara also completed 50% of his passes going 3-6 for 76 yards.

As I mentioned earlier Brandyn Slaughter was named our Co-Defensive Player of the Game. Meaning another Bobcat had a standout performance on the defensive side of the ball. William Long who had a tough matchup against Estill County’s Dylan Officer. Long had several tackles from the nose guard position but his impact on the game stretched further than the stat line. Long was able to disrupt the snap and demanded a double team most of the night. His ability to do so allowed the Linebackers to play side line to side line. His impact at the nose guard position earned him Co-defensive player of the game by us at Bluegrass Sports Nation.

Breathitt will be back on the RiverBank next week as they welcome the Powell County Pirates to Jackson. Powell County is coming off a tough loss to the Prestonsburg Blackcats 27-20. Bradley Charles of BSN and our Powell County Columnist will join myself and Fletcher Long for our Live Facebook Broadcast. We hope to see you at the game, but as always if you can’t make it; join us on our Facebook Live Broadcast. We encourage our viewers to interact with us by tweeting or commenting during our broadcast.