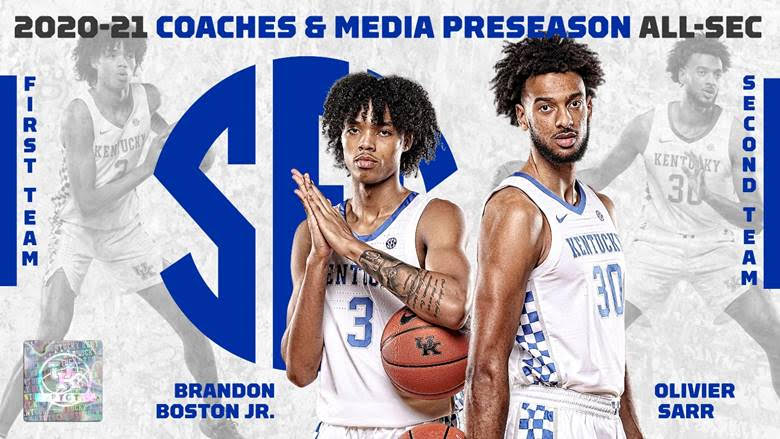 BIRMINGHAM, Ala. – A week after earning selection to the preseason All-Southeastern Conference Teams by the media, Kentucky men’s basketball newcomers Brandon Boston Jr. and Olivier Sarr were tabbed to the coaches’ ballots.

Boston, who earned first-team distinction by the media, is also a member of the eight-man first-team squad as picked by the league’s 14 head coaches. Sarr is a second-team representative and was also on the media’s second team as well.

Kentucky, along with, Alabama, Florida, LSU, South Carolina and Tennessee, all have multiple selections. In all, 34 different players received votes for the coaches’ teams.

The coaches’ preseason All-SEC first and second teams consist of a minimum of eight players on each squad, voted on by the SEC basketball coaches. No ties were broken and no predicted order of finish was made.

Boston is a consensus five-star prospect and Kentucky’s top-ranked player in the 2020 class, he averaged 19.7 points and 7.0 rebounds per game at Sierra Canyon his senior season. He helped lead the team to a 30-4 mark and a No. 2 national ranking. Boston was named the California Male Athlete of the Year and the California Basketball Player of the Year by USA Today. He was also tabbed a First Team Naismith All-American, Second Team Sports Illustrated All-American, SLAM Magazine All-American, California Mr. Basketball and the Gold Coast League MVP.