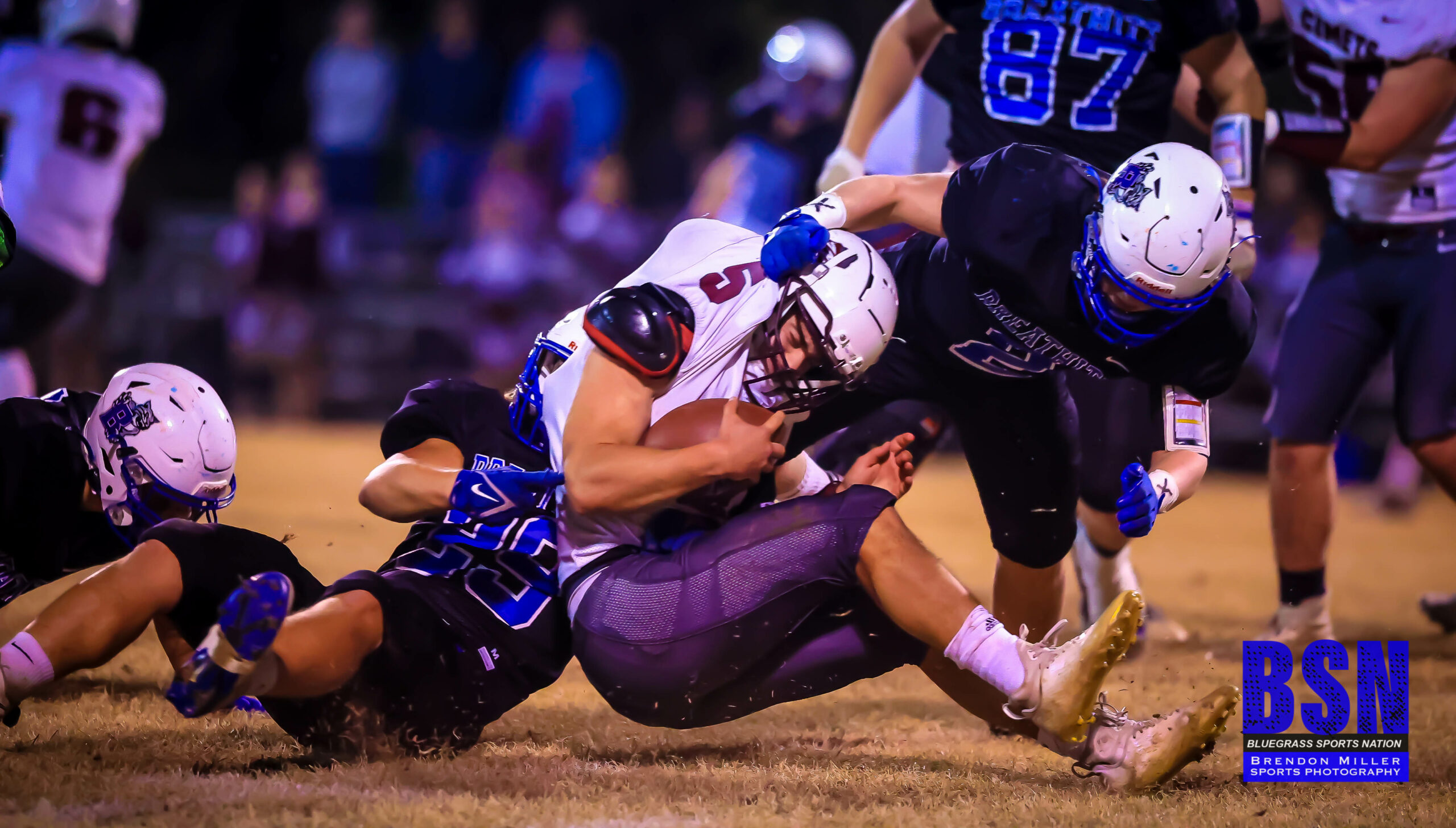 Breathitt County went with the full Black look for the first time in the program’s history on Friday Night for the first round of the 2022 Class 2A KHSAA UK HealthCare Sports Medicine Playoffs. Breathitt, the regular season District 7 Champions, hosted the West Carter Comets who made the playoffs as the four seed from District 8. The men in black went on to turn the lights out on the Comets to advance to the second round of the playoffs.

West Carter won the flip and received the opening kickoff. It was clear that the Breathitt defense would be dominant on the night from the first snap, as the defensive line collapsed the Comet offensive line resulting in a five yard loss on the first play. After a penalty for roughing the passer on the second play, giving the Comets a first down, the Defense then made two stops for no gain and then on third, West quarterback Kale Back tried to throw a screen that was picked off by Bobcat defensive lineman Michael Hudson for his first career interception.

Breathitt wasted no time in getting on the board as Tyler Bryant hit the dymnamic Isaac “Wheels” Turner on a swing pass from the 27, and Wheels did the rest scampering into the endzone. Braxton Terry added the PAT and the Bobcats led 7-0 at the 9:19 mark of the 1st.

On the ensuing drive, the defense again held the Comets to negative yards. When the Comets did not connect on a fake punt on 4th, the Bobcats had the ball back at the West Carter 43. After a Jayden Gibson run on first down, Bryant attempted to hit Austin Sperry on a curl out, but the ball bounded off Sperry’s hands and was intercepted by Trace Rivers for the Comets. West gave it right back on the first play with Back and Cole Crampton misconnecting on the handoff and the Bobcats took back over on the 22.

On the first play, Gibson hit a crease opened by Evan Miller and Sawyer Hall to pick up 21 to the 1. Gibson finished it on the next play, and Terry was again good on the PAT and the Bobcats led 14-0.

Breathitt would score three times in the second quarter. Gibson scored his second touchdown from two yards to cap a 60 yard 11 play drive that took 4:43 off the clock on the first play of the quarter. On the play, Breathitt went to the Ultra-Jumbo package and Gibson walked in. Terry again converted the PAT to put the Bobcats up 21-0. After the Bobcats recovered the squib kickoff, Bryant hit Sperry streaking wide open over the middle from 37. Terry was again good, and the Bobcats led 28-0 with 9:18 on the clock.

The Bobcats capped off the half with a pick 6 by Senior safety Blake Ritchie from 12 yards. This put the Bobcats up 34-0 and Breathitt went for the conversion to run the clock, but the pass was incomplete. At the half, Breathitt led 34-0.

In the first possession of the second half, Breathitt added to the lead with Kory Combs capping a four play 51 yard drive rumbling in from four yards. Terry was good again, to put the Bobcats up 41-0 and run the clock with 10:30 to play in the third.

Breathitt would add scores from Caden Bowling with an 18 yard run to kick off the fourth, and then Braxton Terry ran one in from 13 at the horn to set the final score at 54-0.

The star of the night was the Breathitt Defense. Breathitt held the Comets to a total of -13 yards in the game with a total of -30 rushing and 17 yards passing. West Carter’s talented Senior running back Cole Crampton, who had rushed for over 3,000 yards on his career, was held to -10. Senior Michael Hudson played an outstanding game with an interception and caused havoc for the Comet offensive line and had multiple tackles on the night.

NEXT:
Breathitt will host Martin County (7-4) on Friday in Round 2. Kick is set for 7:30 on the RiverBank. Hope to see you there, if not you can watch the stream on Bluegrass Sports Nation Facebook and YouTube!