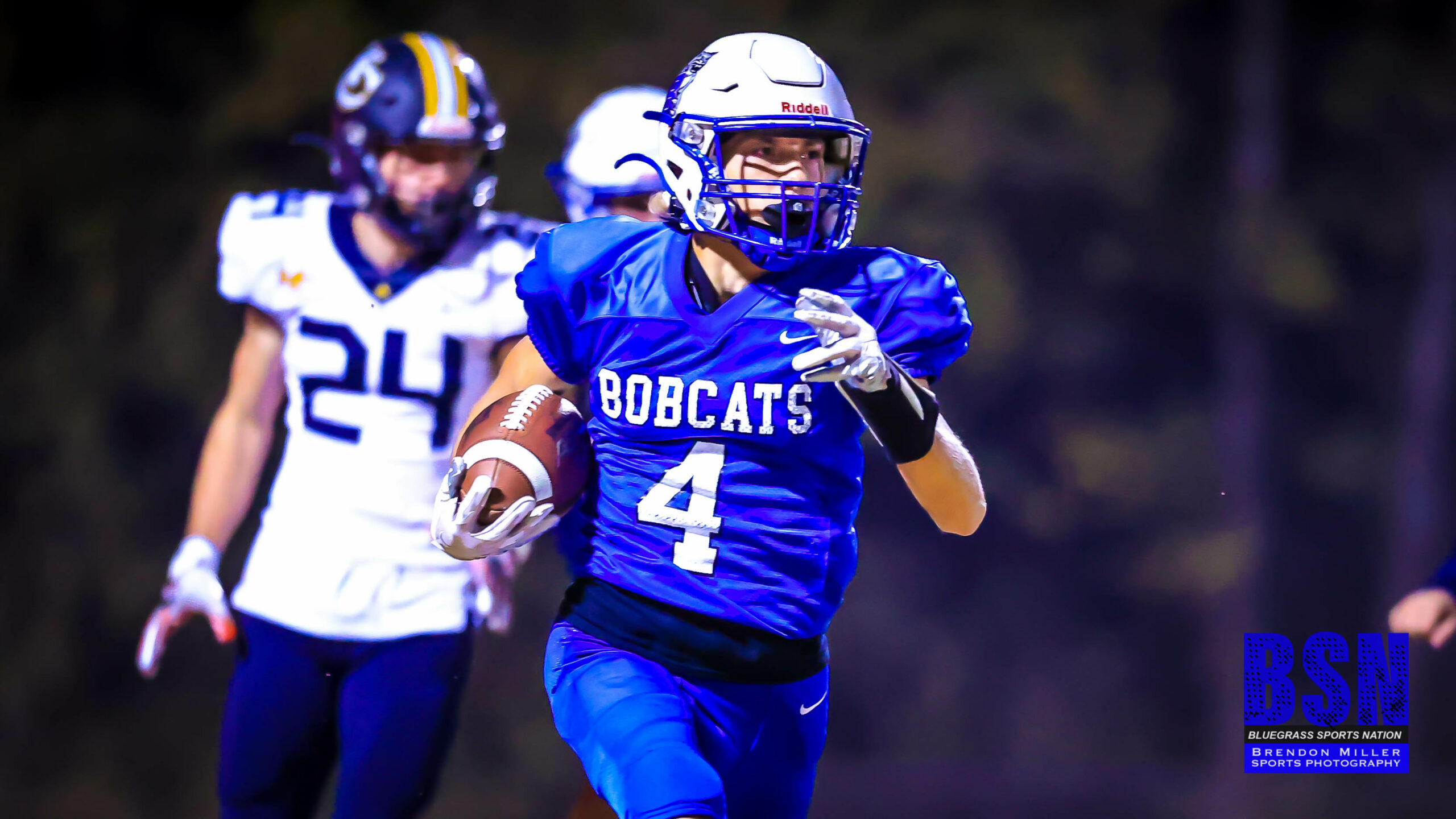 The Bobcats tuned up for the playoffs on Friday Night as the Knox Central Panthers visted the RiverBank. Eight Senior Bobcats took the field at the Mike Holcomb Athletic Complex for their last regular season game completing an excellent career including now three 2A District 7 Titles and a Regional Championship and Semi-State appearance in 1999. Tyler Bryant, Blake Ritchie, Bradley Hall, Ryan Robertson, Bryce Hoskins, Michael Hudson, Dylan Spencer and Trevor Neace will now play the balance of their careers in the playoffs. This bunch has survived much during their careers including two seasons (2020 and 2021) in which COVID routinely canceled games and this two massive floods in Breathitt County (March, 2021 and July 2022) in which many lost much personally and the football facilities were compromised each time.

Breathitt came into the game looking to solidify their RPI and have at least a possible third playoff game at the RiverBank, and to continue to gain momentum for a November run. Breathitt was also looking to avenge the 41-35 loss to Knox last season in which Knox came back from two scores down in the final minutes to tie the game and then win in overtime, in a game that Breathitt had basically controlled the entire night.

Breathitt won the toss and elected to receive the opening kickoff.

FIRST QUARTER
The Bobcats got a good return of the opening kickoff from Blake Ritchie across midfield to the Knox 46. Breathitt picked up two first downs on their first two plays, a swing pass to Isaac Turner and run up the middle by Jayden Gibson. Runs by Gibson and Kory Combs moved the ball down to the goal line and on the eighth play of the drive, Gibson skipped into the zone for the opening score. Braxton Terry added the PAT to put the Bobcats up 7-0.

The Bobcat defense then took center stage. Knox quarterback Mason Griffin completed his first pass for a minimal gain then faced pressure from linebackers Brady Tincher on second down and Brayden Barnett on third down forcing two incomplete passes and a Panther punt.

Breathitt was unable to move the ball on their second possession as Tyler Bryant and Austin Sperry were unable to connect on a long ball. The punt by Turner was low and directly to Knox receiver K.T. Turner who made the catch at the 50 and returned the ball to the 29 setting the Panthers up in excellent field postion. The Panthers took advantage with Partin picking up 15 on the first play up the middle to the Bobcat 14, and then Griffin hit Turner on a screen in the flat and Turner raced into the endzone inside the right pylon for the score. Partin then went to Quarterback for the conversion and hit Turner again who was uncovered and walked in for the conversion, putting the Panthers up 8-7.

Partin’s kickoff pinned the Bobcats back at their own 13, but on the first play Gibson took the handoff and raced around the right end for 54 yards to the Knox 33. After five runs, Tyler Bryant hit Kory Combs who was wide open up the seam from 18 to put the Bobcats back on top for good. The Gibson conversion run made it 15-8.

The Defense got their first takeaway on the first play of the next drive as Griffin floated a pass in the middle of the field that was picked by Ritchie for his third pick of the year at the Knox 46. Bryant wasted little time converting the turnover hitting Turner on the first play at the 25 and he streaked into the endzone for the score. Terry added the PAT and Breathitt was on top 22-8 with 2:55 left in the quarter.

The Defense then got their second take away on the next offensive play as Bryce Hoskins punched the ball out on a Griffin run and the Bobcats were in business again at the Knox 39. Bryant hit Sperry on the first play as Sperry just out-athleted the Knox defenders in the endzone for the touchdown. Terry added the PAT and the rout was on at 29-8.

SECOND QUARTER
Knox then went to their workhorse Partin as the quarter began. Partin picked up two first downs, but a holding penalty derailed the drive and the Panthers turned the ball over on downs at the Breathitt 32. The Bobcat offense then went on a 10 play drive covering the 68 yards on the ground until Bryant hit Tincher from eight yeards for the TD. Terry was again good and the Bobcats led 36-8.

On the ensuing kickoff, Gibson hit a squib kick that the Panthers could not handle and Wes Abner recovered for the Bobcats on the Knox 43. On the first play, Bryant hit Ritchie on a wide receiver screen and Blake cut and weaved through the Knox defense all the way to the endzone. Breathitt then went for two to get the 36 point lead to start a running clock and Combs dozed his way in for the score to make it Breathitt 44 – Knox 8 and start the clock running.

Again on the next kickoff, Knox could not handle the squib and this time Barnett recovered on the Knox 44. A third down holding penalty pushed the Bobcats back to their own 45, but Bryant his Turner in a flair in the left flat and Turner streaked the 55 to the house. Terry was again good, and the Bobcats led 51 – 8 headed to the half.

THIRD QUARTER/FOURTH QUARTER
The second half was played with a running clock and the Panthers scored twice on the Breathitt JV defense, on a Griffin to Partin pass from five at 1:33 in the third quarter, and the same combination at 1:33 in the game on a pass of 34 yards.

NEXT
Breathitt now heads to the playoffs at the Champions of District 7 and will host the fourth place West Carter Comets (2-8) of District 8 of Friday, November 4th, on the RiverBank.