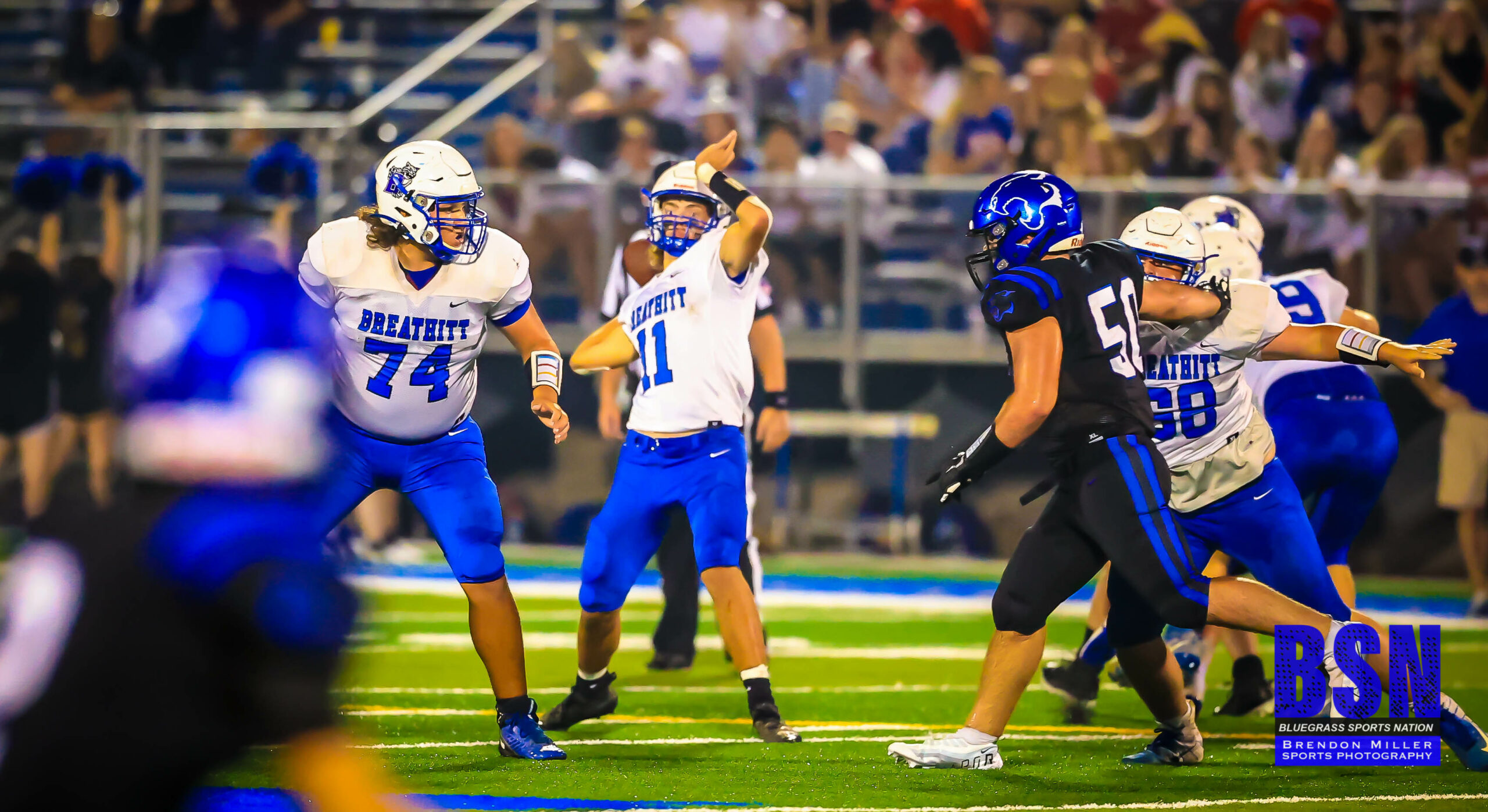 Breathitt traveled to Whitesburg on Friday for their third mid-season Mountain Showdown in three weeks to face Letcher Central. Both teams and their communities were devastated by the July flooding in Eastern Kentucky. Breathitt has been able to start school, however Letcher will not begin until next week. The Letcher administration and principal sponsor Double Kwik put on a great show at the game and the Cougar crowd, especially their student section, was loud and into the action!

Breathitt County opened the game with an explosive offense, scoring twenty-one points in the first quarter and found the end zone with three quick scores. For the first twelve minutes of the game Breathitt County offense was clicking on all cylinders and scored points rapidly with QB Tyler Bryant throwing all three touchdowns. Bryant had over a hundred and twenty yards of passing in the first few minutes of the game and was poised for his best game as a Bobcat. Breathitt looked dominant in their first two possessions and the first Letcher possession, however in Letcher’s second possession, that began to change. Letcher QB Jonah Little began to assert his athleticism that he would showcase the rest of the night. The Cougars ground game took off from there as the Cougars scored the final 26 points of the game to tally the 32-21 win over the Bobcats.

Letcher then adjusted their offensive scheme and used Little to move the chains with his legs, and along with RB Isaac Matthews used the ground and pound running game to pick up first downs. The Cougars finished the drive with Little scoring on a QB keeper from 16. The kick was no good, and Breathitt led 14-6. Breathitt County found the endzone on their third possession when Bryant found RB Caden Bowling just inside the right pylon on a nine yard pass. Terry was good again, and at the end of the first quarter Breathitt County led Letcher County Central 21-6. Little did anyone know that that would be the final time Breathitt would put points on the board in the game.

2nd Quarter
Letcher continued to run the ball and scored an unanswered fourteen points in the quarter with Little leading the way and routinely picking up first downs with his legs and explosiveness. Mathews scored from seven yards and then walked in for the two-point conversion making the score Breathitt 21 – Letcher Central 14. On the next drive is when the game started to unravel for the Bobcats. A costly fumble by Bowling was recovered by the Cougars giving them a short field at the Beathitt 14. Four plays later, Little fumbled at the goal line and Cooper Bailey recovered for the touchdown. Breathitt stopped Mathews on the conversion and Letcher had drawn within a point at 21-20. Breathitt’s last drive of the first half was the Bobcats’ best drive of the quarter as the Bobcats had success moving the ball through the air with Bryant finding Isaac Turner on a swing pass in the right flat and Wheels streaked down the sideline for a big gain. Breathitt moved the ball down inside the five yard line, but Letcher’s defense stood up and stopped the Bobcats on downs to keep their momentum at the end of the half. At intermission Breathitt led Letcher Central 21-20.

3rd Quarter
Letcher and Little just took over the game in the second half as they continued to pound the ball with Little routinely picking up first downs with his legs. On the opening drive of the quarter Letcher drove down the the one-yard line of Breathitt and the Bobcat defense held the Cougars as linebackers Jason Tolson and Brady Tincher made back-to-back plays to hold Little out of the endzone. Breathitt, pinned back deep on the one, went to their power set in the wishbone. Two runs by Freshman Jayden Gibson and one by Kory Combs moved the ball out to the 23 yard line, but then the Bobcats, for some reason, went back to the spread, and the drive ended there. Three and out from the spread, and the Bobcats punted. Little took the first play 54 yards to pay dirt. The conversion was again unsuccessful. There was no scoring the rest of the quarter and Letcher led 26-21 headed to the fourth.

4th Quarter
Breathitt was unable to score the remainder of the game. Breathitt’s best opportunity came as Blake Ritchie broke open on a long pass from Bryant, however, Letcher defensive back Gavin Brown recovered to tip the ball away for an incompletion. Letcher continued to run the ball and use the clock having the ball and the clock on their side. Little scored the final touchdown of the night with a 42 yard run breaking tackles and sprinting up the left sideline. Letcher Central scored the final 26 points of the game to defeat Breathitt 32-21.

Breathitt County drops on the season with an overall record of three wins and two losses. Breathitt is also on a two-game losing streak losing to both 4A schools Perry County Central last week and Letcher County Central this week.

Next week will be a bye week for the Bobcats and is much needed giving the players and coaches a few days off to refocus and improve on both their strengths and weakness. Breathitt County will return to the Mike Holcomb Athletic
Complex on September 30th to host the Middlesboro Yellow Jackets in the first District game of the season.