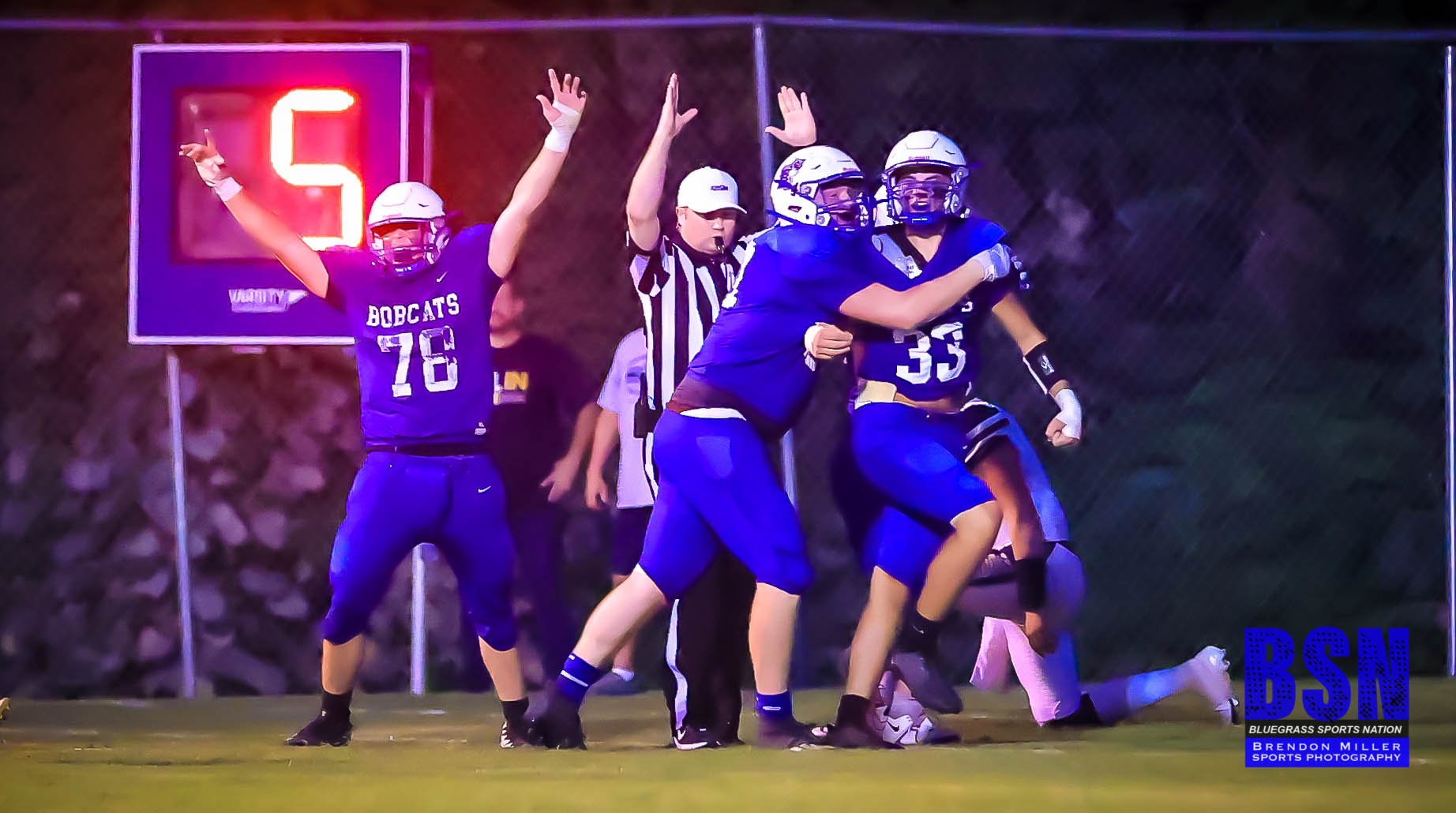 Breathitt and Hazard staged a RiverBank duel on Friday Night in Jackson in the Citizens Bank & Trust Co. of Jackson Honey Bowl. Both teams came into the game undefeated on the season with the visiting Bulldogs having defeated Middlesboro and Harlan County, while the Bobcats had cruised to wins over Magoffin County and Powell County. The key matchup of the game was the explosive Hazard offense led by uber-talented Max Johnson, who was averaging 176 yards a game on the ground, against the resurgent Breathitt defense which had yet to give up an offensive touchdown over the first two games.

FIRST HALF
Breathitt won the toss and received the kickoff. The Bobcats seem to have an issue with opening drives at the RiverBank so far this season as, like in the opener against Magoffin, the Bobcats fumbled (this time on the third play of the game) as Caden Bowling was stripped by Hazard linebacker Logan Thomas. The ball found the hands of Max Johnson, who went untouched 33 yards for the first score of the game. Mia Rouse added the PAT and the Bulldogs were on top 7-0 less than a minute into the game.

Breathitt immediately came back and went smash-mouth as they marched the ball down the field 71 yards in nine plays, with eight on the ground. The Bobcat offensive line of Senior Dylan Spencer, Juniors Evan Miller and Jacob Parker, and Freshmen Sawyer Hall and Waylon Abner paved the way. Tyler Bryant scored from four yards, and the Braxton Terry PAT tied the game at seven all.

The Bobcat defensive front stoned the Bulldogs on their first two offensive snaps as Michael Hudson and Bryce Hoskins began what would be active nights for each. On the third offensive play, Bobcat safety Blake Ritchie made a diving interception of a Max Pelfrey pass to give the Bobcats the ball back on the Breathitt 47. After the Bobcats picked up a first down, Bryant attempted a deep pass over the middle that was intercepted by safety, Landon Smith and returned to the Hazard 11, where the Bulldogs took over.

The Bobcat front seven again stopped the Bulldogs forcing a three and out giving the ball back to Breathitt at their own 37. Bryant again tried to go deep, this time to Austin Sperry, but Max Johnson created his second turnover of the night with a great running interception to give the ball back to Hazard.

On the first play, Hudson stuffed Max Pelfrey four yards deep in the backfield, during which Hazard’s center was ejected from the game for unsportsmanlike conduct. After two more stops, Johnson punted and Isaac Turner caught the ball on the Hazard 38 and returned to the 14.

Breathitt drove the ball to the one in three plays, but Bryant as called for unsportsmanlike conduct and the ball was moved back to the 16. Hazard made the big stop on 4th down as Caden Bowling was stopped by Hank Pelfrey inside the five.

Hazard was able to pick up a first down on a Pelfrey to Smith pass, however, the loss of their normal center became an issue for the Bulldogs as three straight high snaps caused two losses and the third was snapped over Pelfrey’s head and rolled to the endzone where a hustling Brady Tincher won the race and dove on the ball for a touchdown. Terry added the PAT for make the score 14-7.

Folloing the kickoff, Hazard went three and out and punted. Breathitt picked up two first downs before end of half.

Despite three turnovers and multiple penalties by the Bobcats, Breathitt went to half leading 14-7.

2ND HALF
Hazard got their offense going in the first drive of the second half as Johnson was able to get on the edge on sweeps on the first two plays for gains of 16 and 12. Smith then made a catch and run for 16 and a catch across the middle for 17 to get the ball down to the 15. From there Pelfrey hit Jayvon White in the right corner of the endzone for the touchdown. The Rouse PAT tied the game at 14.

A holding penalty derailed the Bobcats on their first offensive position of the half and the Bulldogs got the ball back on their 47. Kory Combs blew up the Hazard drive with a tackle for loss on Johnson on the second play, and the Bulldogs had to punt.

Again another holding penalty pushed the Bobcats back to the nine on their next drive where Bryant hit a wide open streaking Sperry across the middle for a 68 yard catch and run down to the Hazard 13. The offensive line again changed the line of scrimmage and opened holes on all of the next three plays allowing Kory Combs to rumble in from four yards. Terry was again good and the Bobcats led 21-7, with 2:06 left in the third quarter.

The Bulldogs again tried and succeeded in getting Johnson in space as he picked up 11 on the a sweep to the right on the first play. The same play to the left was snuffed out on the next snap by Ryan Robertson for a loss of five. Another air mailed snap over Pelfrey’s head resulted in a loss of 25 and after a nice pickup on a screen to Johnson on the final play of the quarter, the Bulldogs punted again to open the fourth quarter.

The Bobcat offense then misfired to a three and out, and Hazard took the ball on their own 40. Pelfrey hit Johnson on flair out of the backfield and he raced up the left sideline for 22 yards before being pulled down by his face mask which moved the ball to the Bobcat 23. A loss on the first play and two incomplete passes brought up fourth down. Pelfrey hit Johnson on a little crossing pattern out of the back field and from there Johnson broke multiple tackles and dove into the endzone for the touchdown. Rouse pulled her PAT to the left and Breathitt was still on top 21-20.

After a penalty on the ensuing kickoff, Breathitt took over on their own 15 with the game in the balance. Eight staight runs led to the three first downs. The Bobcats then went to their overload heavy set and the wishbone formation. From there Freshman Jayden Gibson picked up 14 on a power run to the left side and then sprinted 34 yards untouched on the exact same play for the touchdown. Breathitt went for two and ran the same play, and Gibson again sprinted into the endzone for the two, putting the Bobcats up 29-20, with 2:03 on the clock.

That was not the end of the story though as Breathitt would give up a kickoff return for the second consecutive week, as Hank Pelfrey took a line drive kick on the 25 and sprinted 75 yards for a touchdown to give the Bulldogs a chance. Rouse connected on the PAT to make it Breathitt 29 – Hazard 27 with 1:52 left.

Hazard attempted an on side kicked, but Sperry made the recovery. Breathitt was able to run out the clock to end the game.

After the game the following individual awards were given:

Breathitt’s advantage in the trenches was evident on the stat sheet as the Bobcats racked up 350 yards of total offense with 202 on the ground, picked up 24 first downs, and controlled the ball for 28 minutes. The Bobcat defense held the Bulldogs to a total yardage of 114 with 10 first downs, and the front seven stuffed the Bulldogs and controlled the line of scrimmage to incredibly hold the Bulldogs to a negative 12 yards rushing, and harassed Pelfrey in the pocket on nearly every passing attempt. The Bobcats will definitley have to clean up the turnovers, penalties, and special teams coverage units from this performance going forward.

NEXT:
Breathitt will travel to Perry Central next Friday Night to take on the 2-0 Commodores. You can watch the action LIVE on BSN Facebook and YouTube with kick scheduled for 7:30.