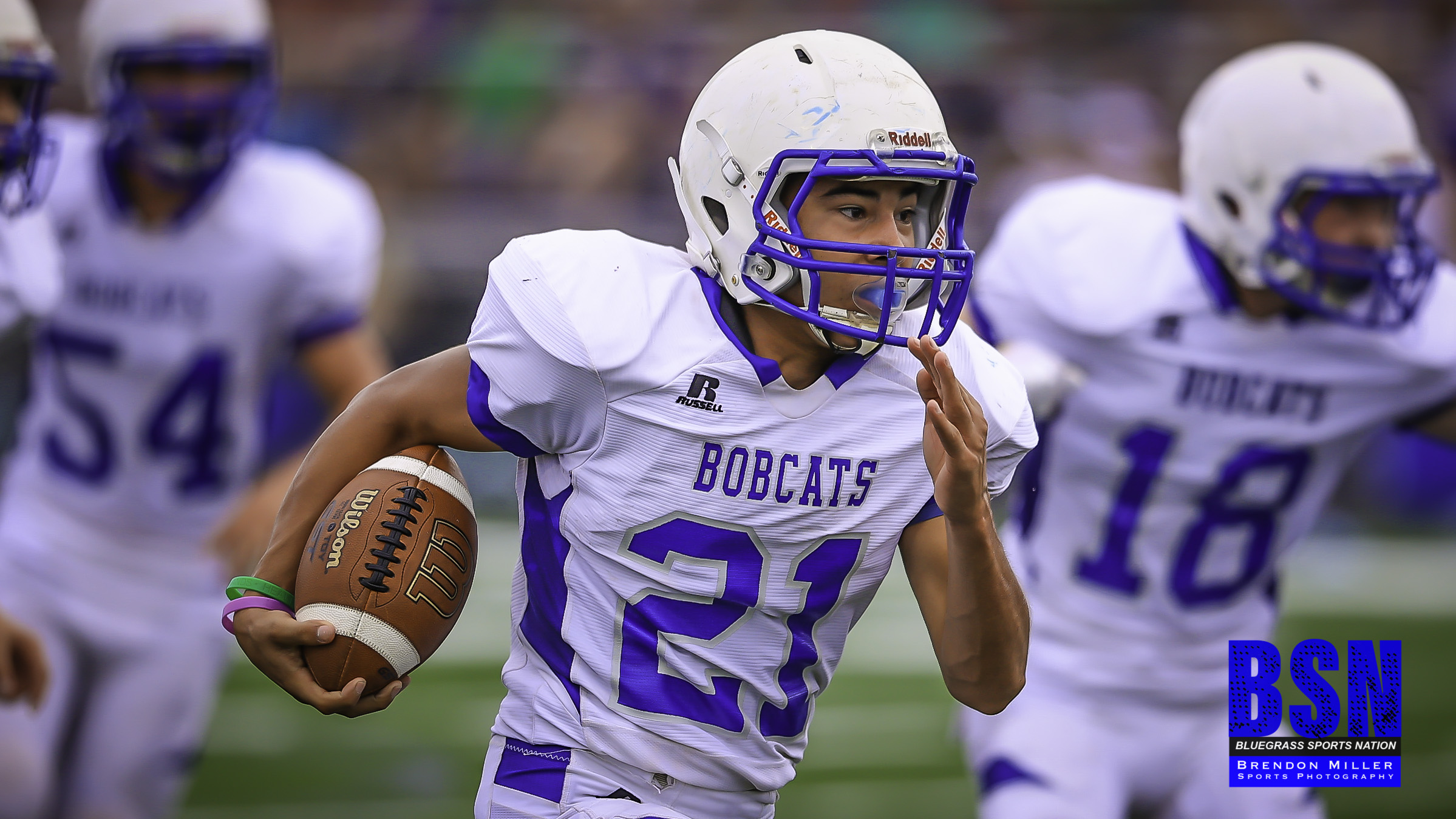 Alex Strong returns a punt for a touchdown in the 2nd quarter against North Laurel - photo by Brendon D. Miller - Bluegrass Sports Nation

Bobcats grind out over 200 yards on ground in Opening Win

The Middle School Bobcats opened their 2021 campaign facing powerful North Laurel in the South Laurel Bowl at South Laurel High school in London. The Bobcats are primed for another excellent season and look to improve on their run to the Semi-Finals of the Kentucky Middle School Football Association playoffs last year. Coach Shorty Combs has seriously upgraded the schedule this year and the Young Bobcats will be battle-ready by playoff time.

Click link for full photo gallery from the game: https://bluegrasssportsnation.com/breathitt-middle-v-north-laurel-image-gallery-8-14-21/

It is no secret that the young Bobcats have a strength in the trenches. Fresh off bringing home the hammer and taking the title at the EKU Middle School lineman challenge, the offensive and defensive lines have talent, size, depth, and confidence. The d-line rotation of Colby Bird, Peyton Stamper, Dawson Hays, Braylin Thomas, Sawyer Hall and Waylon Abner make sledding for opponents tough. The offensive line that was so impressive last year returns four of five of those members who all played in the KYMSFA Battle of the Regions for Region 4 last year, and are stronger and just better this year with Chris Neace, Abner, Carson Miller, Ethan Bowling, and Hall opening holes for the deep stable of Bobcat backs.

GAME SUMMARY
1st Quarter
The Bobcats received the opening kickoff and then controlled almost the entirety of the the first quarter. Breathitt ran 13 plays, all on the ground, and all from the wishbone formation, picking up four first downs before being stopped on downs on the North Laurel five yard line. North Laurel ran one play in the quarter barely avoiding a safety as the Bobcats tackled the ball carrier for a four yard loss on the one.

2nd Quarter
Breathitt finished the job on the first play of the 2nd quarter as linebacker Jayden Gibson blasted through the line and took down the Jaguar running back nearly three yards in the end zone for the safety and put the Bobcats on top 2-0.

After receiving the punt after the safety on the North Laurel 44, the Bobcats ran 10 plays, again all on the ground, with Gibson punching the ball in the zone on a one yard run. The conversion pass was not complete, and the Bobcats led 8-0.

The defense then put a three and out on the Jaguars with Abner getting his first sack of the season on third down to force a punt. On the punt, Alex Strong received the ball on the North Laurel 46 and sprinted untouched into the endzone for the touchdown. Aaron David Johnson connected with receiver Tyson Riley on the converson attempt, but he was stopped short of the goal line. Bobcats were in the lead 14-0.

North Laurel fumbled the ensuing kickoff and Breathitt again took over with under a minute to go in the half, at the North Laurel 34. The Bobcats went to the spread formation from the shotgun, but did not have any success. After incompletions on first and second down, the Jaguars intercepted Johnson on the 15 on third down.

With 10 seconds to go in the half, Jaguar quarterback E.J. Allen hit wideout Carter Kelly on a long ball behind the Breathitt secondary, and Kelly sprinted the balance of the 69 yards for a touchdown at the horn. The conversion pass was incomplete and the score at halftime was Breathitt 14 – North Laurel 6.

3rd Quarter
North Laurel received the 2nd half kickoff and the Bobcats forced a fourth down and the Jaguars decided to go for the first. The Bobcats stopped Kelly a yard short of the first and the Bobcats took over on downs at the North Laurel 44. Breathitt picked up a first down by Gibson, but after two penalties were forced into their only punt of the game, which Gibson executed well, pinning the Jaguars back on their own 15.

North Laurel was able to pick up a first down, but then on 2nd down, Strong again came up big with a pick of an Allen pass at the 47 and returned it to the one yard line. From there, Kylan Combs scored, and then ran in the conversion as well to put the Bobcats up 22-6.

The Bobcats again forced a four and out to finish the quarter and headed to the 4th with the ball and a 22-6 lead.

4th Quarter
John Carter Hollon went for 27 down to the nine on the first play of the quarter, and three plays later, Gibson hit pay dirt for the second time of the game and put up his 14th point of the day. Johnson was again intercepted on the conversion. Breathitt 28 – North Laurel 6.

The Jaguars got their passing going on their final drive with Allen and Kelly holling up several times. Allen hit Kelly on a crossing pattern on 4th and 13 for 31 yards to set the Jaguars up in the red zone. Allen then hit Kelly from the one for the touchdown and then again on the conversion to set the final score at 28-14.

Breathitt ran two plays to kill the clock and finish the victory.