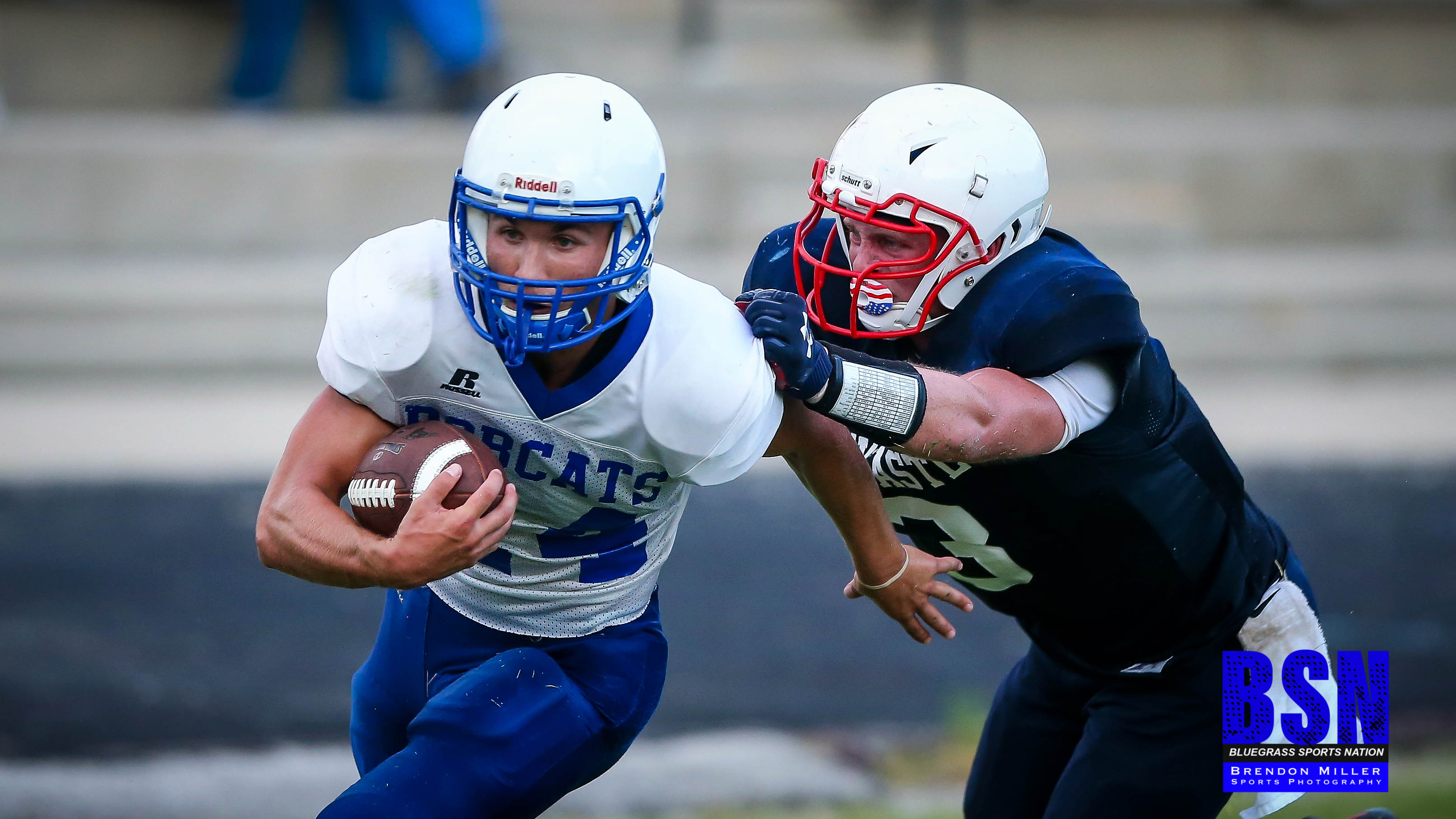 Bobcats and Rockets met on Friday Night in Mt. Vernon.

What can truly be learned in a preseason scrimmage? Well, that is a good question. We believe, when conducted by a couple of very competent staffs like the two in Mt. Vernon, Kentucky last evening, the answer is quite a bit.

No one is going to show too much during a preseason match-up. Why would they?  It is an opportunity for early season opponents to obtain your film and start the preparation early. Wouldn’t want to give them too much to dissect.

Yet, it is an opportunity to attempt to run some plays in live action and see personnel to determine how much, if any, they can help you in the upcoming season.  Friday night, for the Breathitt Bobcats, the scrimmage with Rockcastle County was just such an opportunity and the team which is giddy with seasonal anticipation took full advantage.

Here is what BSN either saw or thought we saw. First, Charles Andrew “Geeny” Collins looked great in his five or so “touches,” scoring twice. When “Genny” wasn’t ripping off a long jaunt to the end zone, he was catching a vertical pass placed almost perfectly by a QB in Braxton O’Hara who has shown a deft touch in the vertical passing game.

Dalton Manns was really something, scoring a couple of TDs on bruising, battering runs which displayed his possessing a gear, in space, we didn’t know he had. Mann’s gaining entry to open space and running away from the back two levels shouldn’t be discounted either.

Rockcastle was fast on defense. In fact, we would say defensive speed at all three levels would be a team strength for the boys from Mt. Vernon.

Senior Wide Receiver Brandyn Slaughter got loose down the sideline on a perfectly thrown and timed “go-route” where he caught it in stride and ran, easily, away from Rockcastle’s back-four. This was something we probably had when we wanted it but not something in a preseason scrimmage you do more than once. You do it one time, to give opponents scouting you something to ponder. Then, you save it for when it matters.

The first team defense looked really good, especially stingy against the run. Rockcastle can run the football and get down hill against most folks.

The defensive line’s first team played well against any attempt to run at it and several second team defensive linemen came in and gave the team valuable snaps. Overall, the defensive front showed some present depth has been developed for the Fall when its will be both tested and needed.

The offensive line started shakily. A two and one-half hour, curvy bus ride will do that to a lot of teams.  However, once the young line figured out the defensive shifts, particularly who they were to block post-pre-snap movement, they acquitted themselves well and really began to assert themselves against the smaller Rockcastle D-line.

We found the blitz-pick-up, as the scrimmage wore on, particularly good. We are sure O’Hara would agree. This line is young and many of them are untested. They will get better as the year progresses.

The JV line, in its scrimmage looked right impressive. It was clear to BSN we have a lot of young bigs who will contribute sooner rather than later. The JV O-line picked up blocking assignments very well even for plays installed in the pre-play huddle on the fly. That is a testament to Breathitt Middle School and Northfork LumberJacks programs and the fact these guys are arriving in 9th grade, once again, good football players like when we really had the program rolling.

We were able to reach Coach Moore concerning his reflections. Coach told us he was very pleased with what he saw. “We got a lot out of it. There were some areas where we need to improve, but what we got accomplished was exactly what we both hoped and needed to accomplish.” Moore went on to tell us, “A lot of players saw action and we got to evaluate some young guys and see what they could do. Coach Parkey (Rockcastle) and his staff do a great job and our team was treated hospitably.”

Perhaps even more telling than what Coach Moore thought would be the impressions of the Coach on the other side of the scrimmage. Well, as luck would have it, we also talked to Scott Parkey.  “Breathitt County has a very good team, from what I saw tonight. I was impressed with the QB play and the RB play was impressive too. The offense has a lot of weapons and will make life hard on opposing defenses.”  Coach Parkey had some comment on his coaching rival. “Coach Moore does a great job getting the most from his teams. The defense is solid and the LBs are quick and disciplined in run-defense.”

Coach Parkey finished by remarking, “Overall, it was a great night of football and a great match-up. It looked to me that both teams improved, which is exactly what you hope to see. Both teams left the scrimmage healthy too. That is the most important thing of all.”

The Bobcats will be back in scrimmage action this coming Wednesday night at “Meet the Bobcats.” Letcher Central will be visiting and we hope there is an excited crowd at the Mike Holcomb complex to welcome a team which promises to be an exciting bunch to get to watch in 2019.

This is Fletcher Long reporting for Bluegrass Sports Nation reminding everyone of the Bobcat-horde to PLAY THROUGH THE WHISTLE!