Breathitt Rolls in 2nd Half to Advance to Regional Final 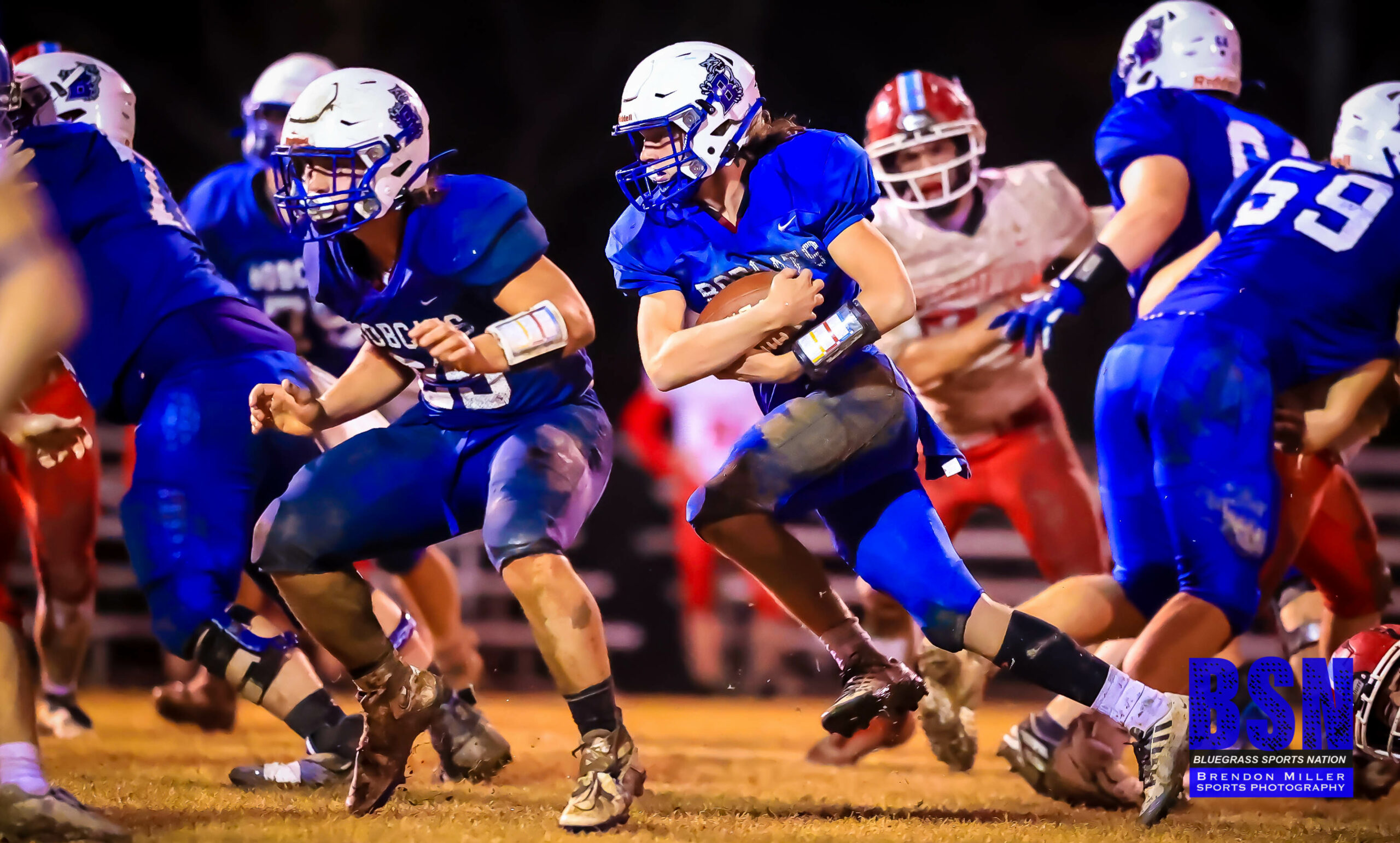 As billed, the Breathitt – Martin matchup was truly a contrast in styles on Friday Night. The balanced Breathitt County attack threw 17 times for 240 yards and ran 31 times for 153, while Martin County ran the ball 41 times for a 262 yards, but were unable to complete a pass on the night. Martin came out and played an impressive first half holding Breathitt scoreless for over 22 mintues, to lead 7-6 at the half. Breathitt made half-time adjustments and dominated the second half on both sides of the ball outscoring the Cardinals 20-0, in the third quarter, and took the 34-21 win.

After a scorless 1st Quarter, Martin jumped on top as Brock Messer took a third down hand off and sprinted 89 yards to pay dirt. The Maddox Johnson PAT had the Cardinals inspired on their sideline and on top 7-0. Breathitt immediately came back and controlled the ball on a 14 play drive culminated by a scrambling Tyler Bryant throw to the back of the end zone that Austin Sperry skyed to grab for the Bobcats’ opening score. The Bobcats went for two, but failed as Bryant and Bryce Hoskins could not connect and the pass fell incomplete.

The only pass by Martin County that was caught on the night was an interception by Brady Tincher by Martin Quarterback Weston Jude at the end of the first half giving Breathitt one play to end the half. Bryant’s pass was out of the back of the endzone and Martin led 7-6 at the half.

The Breathitt defense set the tone for the second half by holding Martin to negative yards on a three and out on the opening drive. After a terrible punt of less than 10 yards, the Bobcats took over on the Martin 45 yard line.

Bryant immediately hit Kory Combs on a seam route to the 18. After two Jayden Gibson runs, Combs finished what he started on the drive pounding the ball in from the five to put the Bobcats on top for the first time and for good. Gibson was stopped on the conversion and the Bobcats led 12-7.

The Martin offense picked up two first downs on the ensuing drive to get the ball down into the red zone, but the Breathitt Defense again stood up with stops on first and second down, and then Freshman, Alex Strong made a big stick on third down to force a 4th down. Jude’s pass had no chance and Breathitt took over on downs.

Breathitt did not take long to extend their lead as they would only take :28 seconds to score. It was clear that Martin could not cover the Breathitt receivers, and on the first play, Bryant hit Blake Ritche on a go route down the Breathitt sideline for 34 to the Martin 41. Bryant then hit an uncoverable Sperry on a deep crossing route at the 10 and Sperry skipped into the corner of the endzone for the score. Braxton Terry knocked through the PAT putting the Bobcats up 19-7 with 1:35 to go in the 3rd.

Breathitt landed the knock-out blow on the kickoff following the score courtesy of Caden Bowling who brought the lumber on Messer and forced the fumble that was recovered by Carter Hollon on the Martin 32.

Breathitt again struck quickly as Bryant hit Isaac Turner with a perfect pass between defenders putting the ball at the six. From there Gibson walked into the endzone with armes raised as the offensive line blew open a huge hole. Terry was gain good to put the Bobcats in front 26-7.

Martin continued to fight with Messer scoring twice in the 4th, and Breathitt added a 13 yard Caden Bowling touchdown. The final was 34-21 with the Bobcats getting another win on the RiverBank to run their record to 9-2 and 6-0 at Mike Holcomb Athletic Complex for the season.

NEXT:
Breathitt will travel to Lloyd Memorial in Erlanger to face the Juggernauts who were runners-up to Beechwood in District 6. LLoyd is 9-3 and coming off a 41-0 shutout of Walton-Verona inthe 2nd Round. The Bobcats faced Lloyd in 1995.