Calipari Named Semifinalist for Naismith Coach of the Year 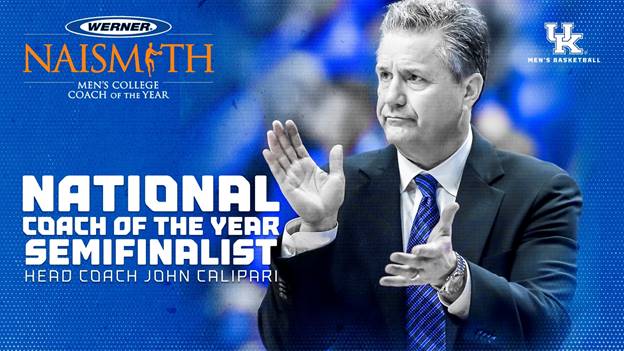 Kentucky men’s basketball head coach is one of 10 candidates

ATLANTA – Unflinching to early growing pains and pressure when his team stumbled out of the gate to an 8-3 start and resolute in his belief in his players and the annual process of preparing young teams for March, John Calipari was recognized for another stellar coaching job with Friday’s inclusion to the Naismith Men’s College Coach of the Year semifinalists list.

After all the early season adversity, including a shocking loss to Evansville and back-to-back setbacks in Las Vegas, Calipari finds himself leading a 24-6 Kentucky team that won the Southeastern Conference regular-season championship last week – with three games to spare – and is in the mix for a top seed in the NCAA Tournament.

Calipari is already one of just two coaches to win the Naismith Men’s Coach of the Year three times, tied with Duke’s Mike Kzryzewski (1989, 1992, 1999) for the most Naismith honors. Calipari is looking to become the first four-time winner of the award. He last won it in 2015.

Four finalists will be announced March 18, at which point fans can support their favorite coach by visiting NaismithTrophy.com/vote. Voting will take place March 20 through April 1 with the fan vote accounting for 5% of the overall final vote.

The winner will be awarded at the Naismith Awards Brunch during the Final Four in Atlanta.

The Atlanta Tipoff Club’s national voting academy is comprised of leading journalists from around the country, current and former head coaches, former award winners and conference commissioners. The voting is based solely on the performances of the 2019-20 season.

Calipari’s work in 2019-20 has certainly been one of his finest.

With Calipari at the helm, Kentucky has already locked up the No. 1 seed in the annual SEC Tournament and positioned itself for one of the top seed lines in the NCAA Tournament. UK sports a 7-3 record vs. quadrant one teams in the NCAA Evaluation Tool rankings, a 4-2 mark vs. Associated Press Top 25 teams at the time of the game and a 7-2 record in true road games.

Kentucky’s six losses are by a combined 32 points.

Calipari has once again proved to be a master of blending talented but young pieces together in a short period of time. By Calipari-Kentucky standards, this group has been led by older players, but few of them played a major role in last season’s Elite Eight run.

Only 50 starts, 27.2% of the scoring and 30.5% of the rebounding returned from a season ago, and UK still checks in at 336th in the country out of 353 teams with an average of 0.99 years of experience in Ken Pomeroy’s experience rankings.

Nonetheless, UK won its sixth regular-season SEC title in 11 seasons under Calipari and individuals have taken their games to new heights. Sophomore guard Immanuel Quickley and junior forward Nick Richards are leading candidates for SEC Player of the Year and All-America honors while freshman guard Ashton Hagans is a semifinalist for the Naismith National Defensive Player of the Year award. Freshman guard Tyrese Maxey is among the best young scorers in the game, and sophomore forward EJ Montgomery has added a fifth weapon to UK’s starting lineup.

How has Calipari’s team done it? His career staples: defense and offensive balance.

After struggling to defend early in the season with new pieces, the Wildcats are once again one of the best defensive teams in the country. UK is limiting opponents to 39.1% from the floor, ranked 16th in the country (through games on March 3). Kentucky has held 18 opponents this season to 40% or less from the field, including eight of the last 11. UK is 15-3 in those games. Of the six AP Top 25 opponents Kentucky played at the time, the Wildcats held four of them to less than 40% from the floor.

Six different players have led the Wildcats in scoring and five players have scored at least 25 points in a game a total of nine times this season. This group is trying to become the first UK team to feature four Wildcats averaging at least 12.0 points per game since Rick Pitino’s first UK team back in 1989-90. Currently three players are averaging above that mark with Ashton Hagans’ scoring average dipping just under 12, at 11.5.

This season has featured a few milestones for Calipari.

A “players-first” coach with a penchant for helping players reach their dreams, Calipari has guided six teams to the Final Four, led one to a national championship and helped 49 players earn selection in the NBA Draft during his now-28-year college coaching career.

The Naismith Memorial Basketball Hall of Famer guided Kentucky to its eighth national championship and his first national title in 2012. In becoming only the second coach in NCAA history to lead three different schools to the Final Four, he has racked up nearly 800 on-court victories and 20 NCAA Tournament on-court appearances.

In his time at Kentucky, Calipari has won more games, more NCAA Tournament games, appeared in more Final Fours, made more Elite Eights and played in more Sweet 16s than any other coach during the time period.

Among the other major coach of the year honors Calipari has won during his career: