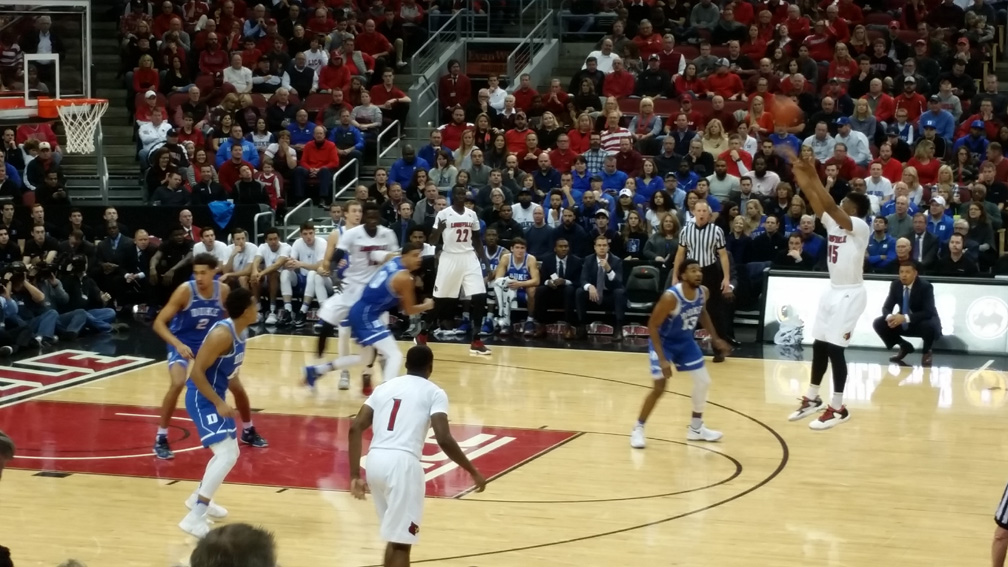 Duke can pull off win at Louisville – Photo by Jason Sheehan

A crowd of 22,686 fans packed the KFC Yum Center to see the latest heavyweight matchup featuring the No. 14 Louisville Cardinals against No. 7 Duke Blue Devils.  A team with eight McDonalds’s All-Americans learned just how difficult it is to win in the Yum Center.

It has been said all year that you don’t know who is going to step up and be the difference maker for the Cards.  Anas Mahmoud, starting for the fifth consecutive game, led the Cards with career highs with 17 points and 11 rebounds.  Mahmoud came into the game seventh on the team in scoring with 5.8 points per game.  Duke associate head coach Jeff Capel raved about Mahmoud saying, “Their big kid (Anas) Mahmoud was terrific today, having a double-double… the plays he made– protecting their basket.”  Rick Pitino echoed Capel’s sentiment, “I thought he was very good.”

Scoring, as has been for much of the season, was a struggle for U of L for most of the first half.  They trailed 20 – 19 with 5:34 to play in the half.  That changed when Mahmoud, a 50% free throw shooter on the season, made both of his free throws after a Duke foul.  They would close out the half with a 34 -30 lead.

The second half saw the Cards lose the lead early on after two Grayson Allen free throws.  They would regain the lead right away on a Mangok Mathiang dunk to make it 39 – 37.  The lead would never change after that.

With 5:35 left Luke Kennard made two free throws to keep the Blue Devils close at 61 – 55, but Donovan Mitchell, who was held in check for most of the game, showed up in a big way.  A Mahmoud steal led to a Mitchell layup and then two 3-pointers later pushed the Cards’ lead to 69 – 60.  The second 3-pointer was from about 25 feet out.  Mitchell finished with 15 points and five rebounds.

Known for their defense, the Cardinals did not disappoint.  They forced Duke into a season high 18 turnovers.  Pitino spoke of the defensive execution, “We got 25 deflections in the second half, which is not easy to do against a good passing team.  We created 18 turnovers, only turned it over 11 times ourselves.  We really played a terrific game. We played two halves, had to battle them.  Guys stepped up that don’t normally play, like VJ [King] did.  It won’t show up in a box score, but he played outstanding defense, made a lot of really good plays.  I am really proud of our guys, and this was a big game for us.”

Grayson Allen, booed every time he touched the ball, led Duke with 23 points, but turned the ball over six times.

Duke’s leading scorer at 20.4 points, Luke Kennard, was held to 17 points.  U of L made a concerted effort to keep him in check and it worked.  After scoring 10 points in the first half Kennard was only able to get off two shots in the second half.  “Well, we didn’t want to play a box-and-one, but what we wanted to do was play four-on-four and keep the ball out of his hands, switch all the time, Pitino said.  “The other guys are very good players, I mean, they’ve got All-Americans at almost every position, but we just wanted to play four-on-four. VJ did a good job most of the night doing that.”