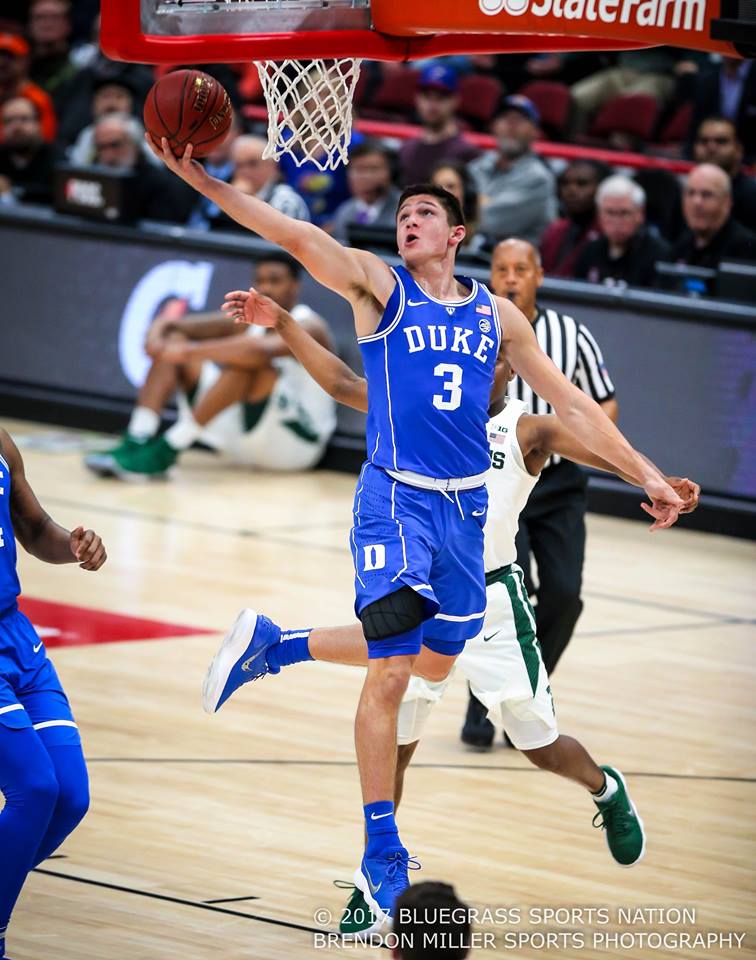 The Champions Classic kicked off with a matchup of top rated teams as the Duke Blue Devils clashed with the Tom Izzo coached Michigan State Spartans. Both teams have championship asperations and are loaded with talent. Michigan St. would ease out to a 12-9 lead at the 13:49 mark good defense combined with a shaky start by the Blue Devils. Duke wouldn’t stay down long as they ran off 12 straight points to open a 9 point lead of their own by the score of 21-12 before a Ben Carter layup for Michigan State. Grayson Allen, who was booed loudly by the United Center crowd, drilled a three to give Duke their biggest lead at 24-14.

Michigan State would go on a big run by getting hot behind the three point line to pull to within 24-23 forcing Duke to take a timeout. Out of the timeout, the Spartans continued their run on a layup by Nick Ward making it an 11-0 run. Duke would retake the lead after a layup by Javin DeLaurier for a 26-25 Duke lead at the 3:49 mark of the first half.

Duke would once again pull ahead with 3 free throws by Grayson Allen and a 3 point basket at the end of the half for a 38-34 Duke lead. Leading scorers for the Spartans were Jackson Jr with 10 points followed by   Langford with 7 and Ward with 6. For the Blue Demons, Allen had 14 while Duval paced a balanced attack with 5. Duke ruled the boards with 26 rebounds to the Spartans 17. Michigan State had 12 assist to the Blue Devils 7. The Spartans committed 8 turnovers to the Blue Devils 5. Michigan State had 11 fouls to 8 for Duke.

Both teams came out during the 2nd half scoring at will and by the end of the first 2 minutes of the half, Duke had eased out to a 46-42 lead. As both teams traded punches offensively, Grayson Allen stayed red hot hitting another trey and a layup to give the Blue Devils a 52-44 lead at the 16:24 mark. Allen would raise his game high total to 21 points to the dismay of the anti Allen crowd.

After Duke raced back out to a 54-44 lead, Michigan State once again worked their way back to tie the game at 61 at the 10:13 mark in the 2nd half. Then took a 1 point lead at the foul line 62-61. Duke had the advantage of some very questionable calls that allowed the Blue Devils to keep Michigan State from gaining too much momentum. Duke would hold a 65-64 lead at the 7:47 tv timeout. At the 6:02 mark Wendell Carter Jr. hit Ben Carter in the face with an elbow as both team were heading up the court. Despite Carter being laid out on the floor and a video review, nothing was called on Duke’s Wendell Carter Jr.. After a time out at the 3:05 mark, Duke help a precarious 78-75 lead.
Out of the timeout, the red hot Grayson Allen hit 2 more threes, giving him an incredible 35 points. Duke would open up a 9 point lead with under a minute to go. Duke will retain their number one ranking. Michigan State headed home wondering how they could have stopped Duke’s Grayson Allen who was the clear difference in the game. Allen finished with 37 points and Duke won by the score of 88-81.

Leading scorers for Duke were Allen with 37, Duval 17 & Wendell Carter Jr. with 12. For the Michigan State Spartans, Jackson, Jr., Bridges & Ward all had 19 points each. Duke out rebounded Michigan State 46 to 34. Winston had 11 assists for the Spartans while Duval had 10 for the Blue Devils.