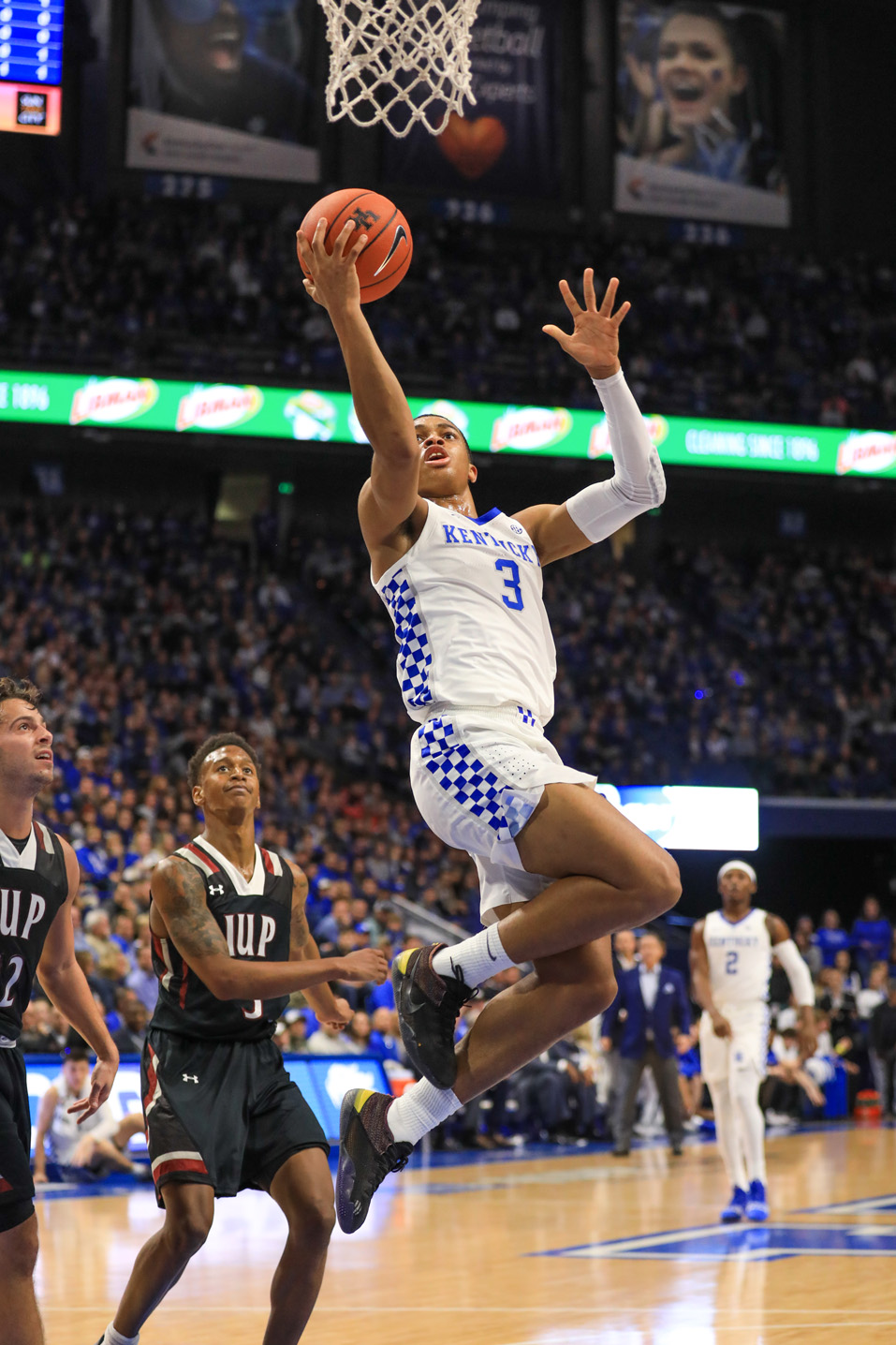 As the preseason Basketball concludes the Kentucky Wildcats had one preseason opponent remaining.  The Opponent is the IUP Indiana University of Pennsylvania a division two school from a small town located in Indiana, Pennsylvania.  Kentucky is a favorite to win the game and the final tune up before the season begins next Tuesday as Kentucky competes in the Champions Classic against the Duke Blue devils.   UK and IUP has never meet on the Basketball court, and UK is heavily favored against the Crimson Hawks.

Kentucky begins the game with a new lineup with three new student athletes’ starting with Reid Travis and PJ Washington.  As I predicted in last weeks game recap UK will tinker with the lineups until Coach Calipari finds a lineup that gels and gives the cats the best chance to win the game.  Kentucky starts Reid Travis at the power forward position, PJ Washington at the center position, Keldon Johnson, Tyler Herro on the wings as Ashton Hagans ran the point.

Kentucky gets the tip and Tyler Herro scores 3 points on the opening possession.  UK leads 3-0 with 19:42 remaining in the first half.  Kentucky starts to get in transition and the lead quickly grows to fifteen points UK 28- IUP 13 with 9:30 remaining in the first half.  Tyler Herro continues to light up the scoreboard with an impressive shooting display.  Tyler Herro shots 4-5 from behind the ARC and has 12 points at the close of the half.  IUP keeps the game close early on only trailing IUP 13-10 at the first media timeout.   Reid Travis has a dominating first half is approaching a double double as the half ends.  Travis was a force on the inside, grabbing 8 rebounds and scoring with a multitude of moves.  Travis finishes the half with a game high 15 points, 8 rebounds, playing 17 minutes.  At the half UK leads IUP 43- 34.

UK starts the half with a made basket as PJ Washington slams the ball with a strong two hand slam.  The next couple of possessions saw very little offensively.  Anyone would expect IUP to struggle against the more athletic CATS, but UK goes several possessions with nothing flowing.  UK looks sloppy and start to commit unforced turnovers, and not hustling back up the court on the defensive end.  UK leads 47- 39 with 16:36 remaining in the game.  Kentucky breaks the scoring drought with a couple of fast break opportunities providing highlights in the second half.  On one possession the CATS run the floor on the fast break, Center Nick Richards is Trailing the play, The Cats set a back pick and Richards finishes the play with crowd pleasing slam dunk off the lob play.  Kentucky who shot the ball exceptional in the first half struggled to score in the second half.  Kentucky starts to pull away late in the second half, putting the game out of reach.  UK goes defeats IUP 86-64, improving to 2-0 in preseason play.

Kentucky is lead in scoring by # 22 Reid Travis.  Travis finishes the game with a game high 22 points, grabbing 14 rebounds playing 33 minutes.  Travis Front Court Team mate PJ Washington had a stellar game as well finishing with twenty points, and six rebounds.  Tyler Herro was incredible in the first half, connecting on 4-5 from behind the arc.  Herro struggled in the second half but finishes the game with a solid performance of seventeen points, shooting 5-7 from behind the arc. Three other KY players scored in tonight’s contest.  Keldon Johnson contributed the game with 11 points, Nick Richards finishes with 8 points, and Ashton Hagans finished the game with 3 points.  IUP had five players score in the game led by #50 Diaz who scored 17 points.  IUP #01 Miller contributed the game with 16 points, #10 Brandwhick 14 points, #12 Lombardi 13 points, #24 Bearer 3 points.

The Preseason is now over for the CATS.  Next week the CATS will be tested in the Champions Classic against the Duke Blue Devils.  The matchup with the Blue devils is one of the most anticipated and hyped games of the season.  Two of College Basketball’s most historic programs head to head, with both teams being ranked in the top 10 of the polls.  UK enters the preseason with a # 2 ranking in both polls, Duke is ranked #4 in the polls.  Tuesday Nights Battle of the Bluebloods amongst UK and Duke should be an instant classic and a game that will live for ages.  IUP opens the regular season hosting the Concord Mountain Lions on Friday November 9, 2018 at Indiana, Pennsylvania.  On Tuesday November 6th, College Basketball begins.  One of the opening games of the season features the Kansas Jayhawks battling the Michigan State Spartans.  In the closing game of the season UK – Duke will conclude ESPN coverage of opening night college basketball @ 9:30 pm from Banker’s Life Field House in Indianapolis Indiana.