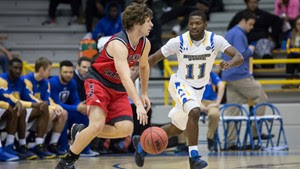 Sophomore guard Malik Maitland led all scorers with 20 points, shooting 7-for-9 from the field. The 5-foot-11 starting point guard connected on a staggering five of six attempts from three-point range.

“Malik is the straw that stirs the coffee,” Woods said. “We’re going to go as far as he takes us. The sky’s the limit for this kid.”

The Eagles exploded out of the gate with 21 unanswered points, before Kentucky Christian finally stopped the bleeding with a layup 5:16 into the first half. Morehead State led the Knights 53-16 at halftime.

The Eagles will return to action on Sunday for the first of two matchups on the season with Lipscomb. Morehead State will tip off with the Bison at 4 p.m. ET. Sunday’s game will be broadcast live on the OVC Digital Network.