“Don’t ever quit your cattle on a stormy night.” That’s how Kentucky 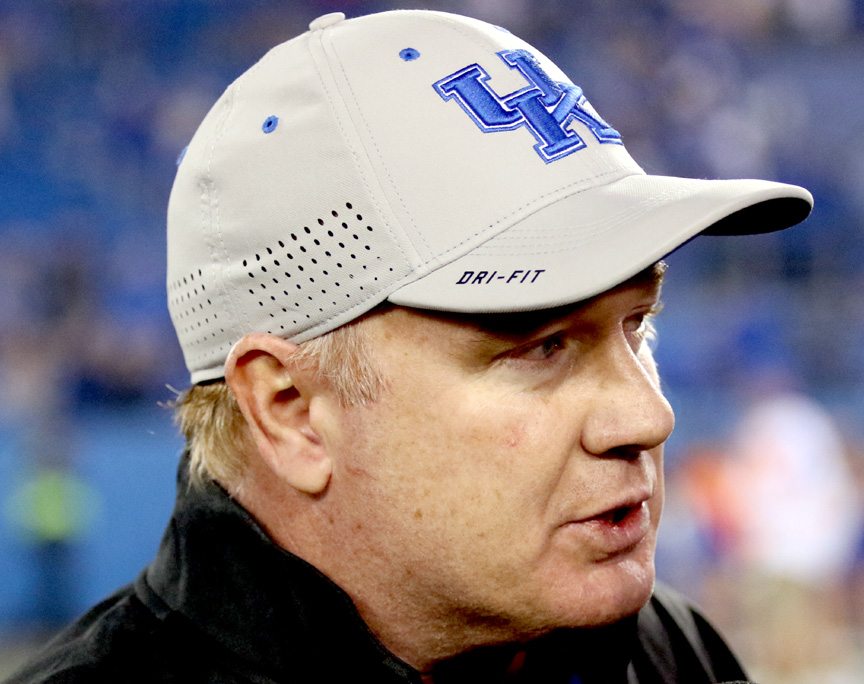 Coach Mark Stoops responded after I asked him about the confidence level of his team prior to their trip down to Knoxville. After the stormy loss to the Georgia Bulldogs last weekend, I’m certainly not quitting my cattle and neither are the coaches. Unfortunately, the cattle may not have gotten the message as Tennessee shredded the Wildcats 49-36 on a perfectly crisp and sunny autumn afternoon in the heart of Volunteer Nation.

If you mention the Tennessee Football Program, several things come immediately to mind. For some reason, the first thing I think of are putrid orange pumpkins. I also think of Rocky Top…and coonskin caps and Smokey the dog and the Vol Navy. I think of massive throngs of obnoxious hillbilly fans filling a huge antiquated stadium with those iconic checkerboard end zones. I think of an overrated Peyton Manning and an overweight Phillip Fulmer trotting through the big “T” during pregame introductions. I think of a beer barrel, a 26-game losing streak, and frigid November Saturdays in Commonwealth Stadium. I’m thinking of all these things while sitting in the comfortable press box of a not-quite-sold-out Neyland Stadium, watching these long-time rivals duke it out for one last fleeting shot at the SEC eastern division crown.

It’s kind of hard calling this a rivalry game when one team wins all the games. Whether it’s Mark Higgs in 1987 failing to score on four straight carries from the five-yard-line or Randall Cobb in 2009 never even touching the ball inside the ten-yard-line, Kentucky always found a way to lose to the hated Big Orange. Matt Roark’s single-game heroics back in 2011 notwithstanding, Kentucky fans have always borne the brunt of humiliation and heartache at the feet of our uppity neighbors from down south. Today was no different as Tennessee racked up 599 yards of total offense against a beleaguered UK defense. Quarterback Joshua Dobbs single-handedly torched UK for 147 rushing yards, 223 passing yards and 5 touchdowns.

Kentucky’s offense did its part to keep pace. If you would have told me beforehand that the Wildcats would gash the Volunteer defense for 635 total yards (443 on the ground), I would have bet the farm on a victory.  But field goals rather than touchdowns in the red zone lead to a ton of wasted opportunities and the team’s eventual demise. Boom Williams lead the team with 127 rushing yards and a touchdown. Stephen Johnson, Jojo Kemp and Sihiem King also rushed for a touchdown apiece in the disappointing loss.

During practice this week, Rocky Top blared incessantly from the practice facility speakers. I’ll reluctantly confess that other than it being the UT fight song, I always felt it was a rather catchy jingle. However, hearing it played live, again and again after every Tennessee score made me want to upchuck all over my orange checkerboard napkins. The squealing in the UT booster suite next to the press box only added to my disgruntlement and dismay. To think I missed my only nephew’s first birthday celebration for this alleged bucket list experience made me all the more nauseated.

Kentucky finally gets a breather next week as the winless Austin Peay Governors come crashing into Commonwealth Stadium. Normally this game would be a snoozer but because a win would officially make the Wildcats bowl eligible, it’ll at least have some added significance. If the Cats come ready to play, the final score shouldn’t be even remotely close. But remember that we’re talking about Kentucky Football here and stranger things have happened in the past. If Kentucky manages to blow this one though, I may quit my cattle for good.