College Football – Where does the Louisville football team go from here? 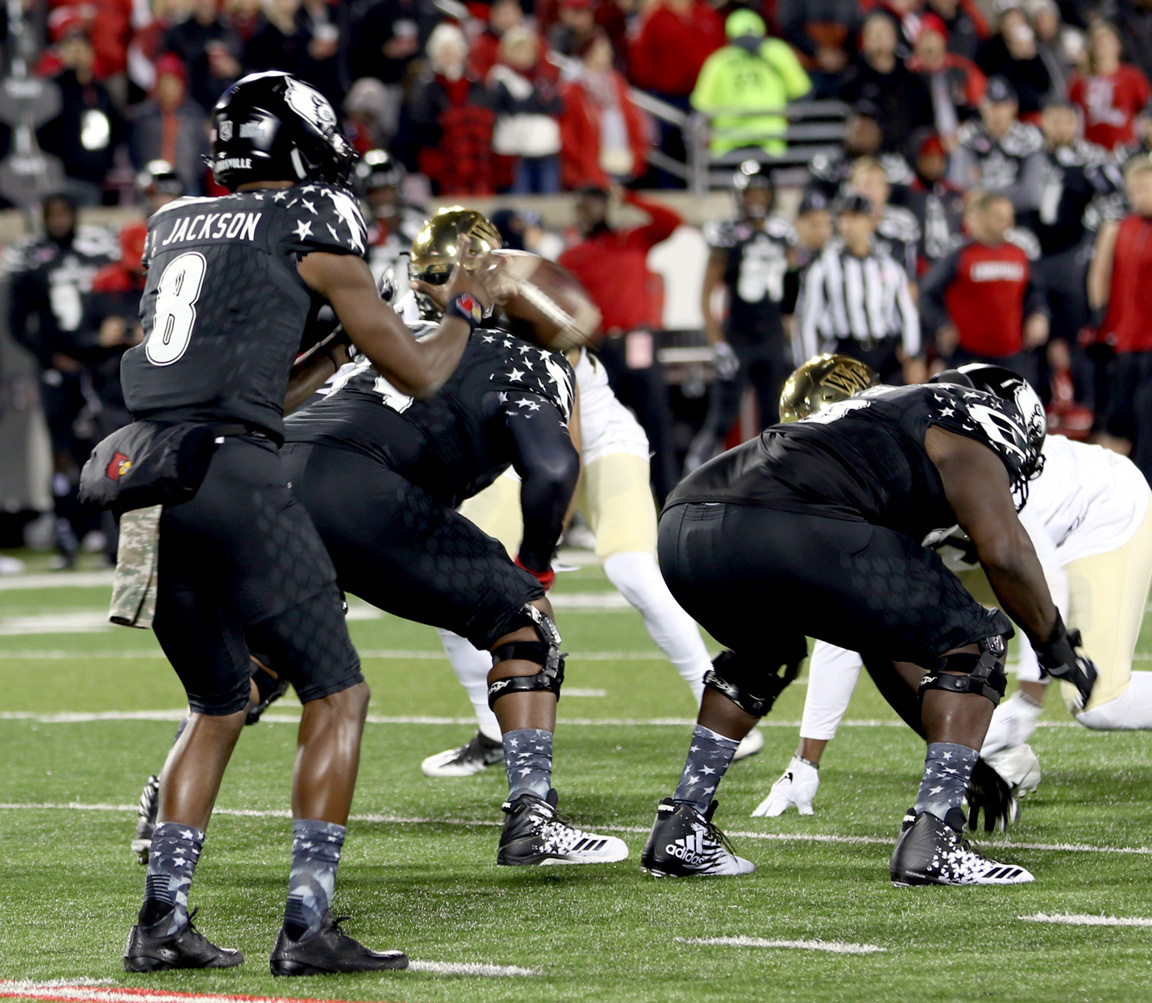 Prior to No. 5 Louisville’s Thursday night debacle at the hands of Houston, the playoff scenarios were endless.  If U of L wins their games against Houston and Kentucky then they are definitely in.  However, those wins have to look good and can’t be close.  Vegas had them favored over everyone except Alabama and Ohio State, therefore they should be in already.  In most people’s minds they were the one team that had the best chance to beat No. 1 Alabama.

These scenarios came to an abrupt halt when Houston completely dismantled the Cards 36 – 10 in the most watched ESPN game this year.  U of L will have to wait until next year for another chance at the playoffs.

Louisville came into the Houston game leading the nation in scoring at just shy of 50 points per game.  They had the Heisman frontrunner by a wide margin in Lamar Jackson.  They had a top 10 defense to go along with their electrifying offense.  Surely they could get past Houston and then defeat Kentucky to get in the playoffs.

It was not meant to be as U of L self-destructed against Houston, trailing 31 – 0 at halftime and eventually falling 36 – 10.  It was a game in which they hit so hard early that they were never able to get back to their feet.

Were the Cardinals ever as good as they were made out to be.  Coming into the season, U of L had three games that were most certainly circled on the schedule.  The first was against Florida State, and we all know what happened in that game.  The Cards easily destroyed the then No. 2 Seminoles 63 – 20.  They hype for U of L was growing fast.

The second game circled would come against No. 3 Clemson.  The Cards came within one play of exercising their demons against the Tigers, before falling 42 – 36.  Even with the loss, the Cards were still in the thick of things, although they had some work to do and some chaos to come from other teams to get them in the playoffs.

The next five games before the last game circled on the calendar, against Houston, were a mixed bag for the Cards.  First, Duke came into Papa John’s Cardinal Stadium and used a slow, methodical, and effective pace to slow the Cardinals’ offense.  It worked almost to perfection, but the Cards won 24 – 14.

A 54 – 13 win at North Carolina State got the Cards back on track and then they faced Virginia on the road.  In what should have been an easy win, proved to be the opposite for U of L as they struggled all game against the Cavaliers, eventually falling behind 25 – 24 with 1:57 remaining.  Jackson took them down the field, at one point needing a 4th and short completion to Cole Hikutini to keep the drive alive.  He then tossed a beautiful 29 yard touchdown pass to a leaping Jaylen Smith to close out the upset-minded Cavaliers.

Next came Wake Forest, a team overmatched against the Cards, but with a stout defense.  The Demon Deacons had the Cards on the ropes for the most of the game, leading 12 – 10 midway through the fourth quarter before allowing 34 straight points and falling 44 – 12.

The chaos the Cards needed to propel them to the playoffs happened that day and that night as three teams ranked ahead of them in the College Football Playoff Rankings all lost.  Clemson lost to unranked Pittsburgh on a game winning field goal.  Washington lost to then No. 20 USC.  Michigan would then lose to unranked Iowa on a game winning field goal.

The Cards had all they needed going for them heading into their matchup against Houston.  They were favored by 14 and were playing a team once ranked as high as No. 5 at the beginning of the season.  The Cougars even beat then No. 3 Oklahoma to start the season.  They were rolling heading into their game against Navy in which they lost 46 – 40.  They narrowly escaped with a win against Tulsa and then were upset by SMU 38 – 16.  Narrow wins against Central Florida and Tulane made the game against U of L lose some its preseason luster.

All the Cards had to do was beat Houston and Kentucky to have a shot at the playoffs, but 15 penalties and three lost fumbles will not win you many games against any team, let alone a quality opponent on the road.  The game was over before it began.  The Cards never got on track.

Even when it seemed to go right for them, it quickly turned bad.  The Cards forced the Cougars to punt on their first possession of the second half and then scored to make it 31 – 7.  Once again they forced Houston to punt.  With a little momentum going for them, the Cards moved the ball all the way to the Houston 12.  On second and four, Jackson ran the ball four yards, but committed U of L’s third fumble of the game.

The defense held the Cougars in check in the second half, but it was not meant to be.

Louisville’s playoff run is done.  No more talk about playoff scenarios or what ifs.

Now it is on to the annual rivalry game against Kentucky, a more than likely Heisman Trophy presentation for Lamar Jackson, and a hopeful New Year’s Six bowl.

For U of L fans, the season is not over yet.  There still is work to be done.  Hopefully the fans enjoyed the ride while it lasted and are looking forward to the rest of the season.